News, gossip and rumors-we sort it out for you here. 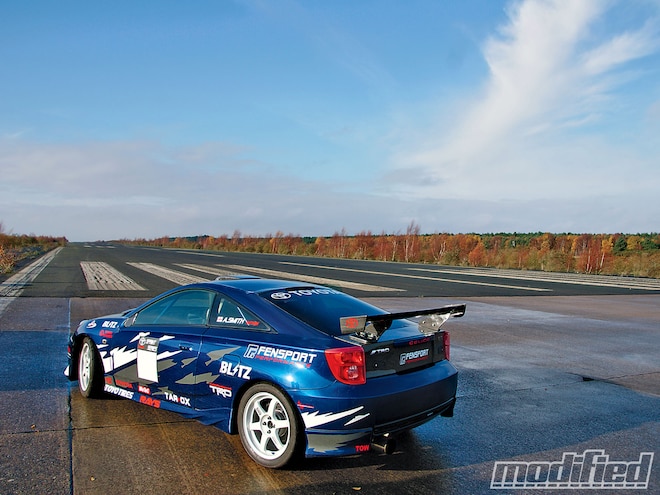 Peel off the stickers and roll up the windows and you'd be hard-pressed to recognize this Toyota as a 200-mph monster. But double-century speeds are pretty much Fensport Performance's comfort zone, as the Celica is the company's second vehicle to top 200. The AWD GT4 pumps out 700+ hp via a Turbo Dynamics MD355 blueprinted turbocharger. Accomplished time attack pilot Adrian Smith pushed the 'yota to its limits during a top-speed event at Woodbridge Airfield near Ipswich in the United Kingdom.

After a 196.9-mph warm-up and a run aborted due to side winds, the third time proved to be the charm. "I got wheelspin on the slippery start in the first three gears, but once in fourth the car settled nicely," quipped a cheerful Smith. "At around 180 mph, a crosswind again started to move the car off line. However, I kept my foot in and thankfully the car stayed straight and the wind subdued. I checked the speed and it was 201, then 202! I was thinking, 'Yes, it is going to do 205/206,' but then there was a tiny misfire and the speed dropped to 201 again. By then, it was time to brake. I had done 202.22 mph-what an amazing feeling." The "misfire" was later found to be the 8300-rpm rev limit! Making Fensport's achievement more impressive, the 202.22-mph top speed was reached from a standing start in just 1.1 miles.
»turbodynamics.co.uk
»fensport.co.uk