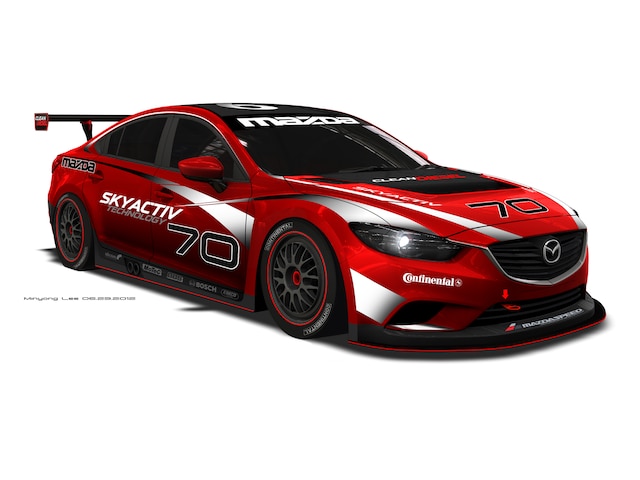 LOS ANGELES, Calif - Mazda North American Operations today announced at the Los Angeles Auto Show that the racing version of the 2014 Mazda6 will make its motorsports debut at the Rolex 24 endurance race on January 26-27, 2013 in Daytona Beach, Fla. The Mazda6 racecar will be powered by a Mazda SKYACTIV-D Clean Diesel engine and is being developed for the new GRAND-AM GX class. This will be the first time a diesel-powered vehicle of any type has ever raced at the Rolex 24. Mazda will be seeking their 24th class win in the American endurance classic, having most recently won in 2008 and 2010.

John Doonan, Motorsports Director, Mazda North American Operations noted that: “We have been eager to announce this car for months, but had to wait until the production car was revealed. The SpeedSource engineering team, working with the Mazda engineers, have been flat out for months on engine development. We’re happy to report that the engine is meeting the performance targets for both power and endurance. That means 400+ hp for over 50 hours, with an engine that includes a very long list of production Mazda parts. This is not a pure race engine; it is a production block SKYACTIV-D. We’re excited about having our newest engine powering our newest car.”