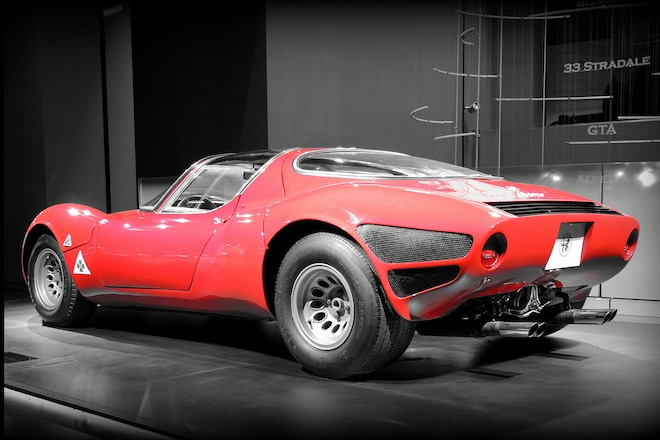 Although its future is still very much up in the air, Alfa Romeo still has time to celebrate its history. With the striking 33 Stradale turning 50, it's only fitting that Alfa Romeo dedicated some space to the rear-engine two-door at its Museo Storio museum in Arese, just outside Milan, Italy.

Penned by Franco Scaglione, the Alfa Romeo 33 Stradale used technology derived from the Tipo 33 race cars and was given an exterior that remains timeless and beautiful to this very day. The car made its debut the day before the Italian Grand Prix at Monza in August of 1967 and adopted the Quadrifoglio four-leaf clover badge as a point of pride.

To celebrate the car's 50th anniversary, Alfa Romeo is putting the 33 Stradale you see here and a series of other 33 projects on display as a temporary exhibition. The car will take center stage, as it sits on permanent exhibition in the museum in "The most prestigious position, right in front of the gigantic illuminated installation that portrays the Alfa Romeo DNA."

According to Alfa Romeo, "The exhibition continues with five of the six concept cars derived from the 33 chassis, created by great masters of car design: Carabo, Iguana, 33/2 Special, Cuneo, and Navajo." Additionally, the 33/2 Daytona, 33/3, 33 TT12, and 33 SC12 Turbo racing cars are also on display, as well as countless other pieces of Alfa Romeo's racing history and production designs.

The exhibition is titled "33 La Bellezza Necssaria" or 33: Necessary Beauty after the brand's favorite expression and will start on August 31.