Educate yourself on one of the quirky-coolest offerings to come out of the '90s.

Remember when Japanese cars wore all their features right on their sleeves? Big, bold rocker graphics proclaiming "DOHC 16-VALVE," "VTEC," "Twin-Cam," and that sort of thing. Well, the Isuzu Impulse RS might take the crown for U.S.-market Japanese cars with long-winded decals, with its back panel blaring: "ALL-WHEEL DRIVE INTERCOOLED TURBO." And it's all true.

You're looking at one of the rarest sports cars to come out of Japan during that country's fantastic era of wild engineering in the '80s and '90s, where anything was possible and everything went. Including the Impulse RS, what is basically a Geo Storm with all-wheel drive, passive rear-wheel steering, and a wild turbocharged engine.

Maybe the Geo Storm is better known, but underneath it was really all Isuzu. The second-generation Impulse ought to be the one we remember, but it isn't. That's because Isuzu was on its long, slow decline into virtual irrelevance by then, quitting passenger cars entirely not too long after. But it didn't have to be this way. 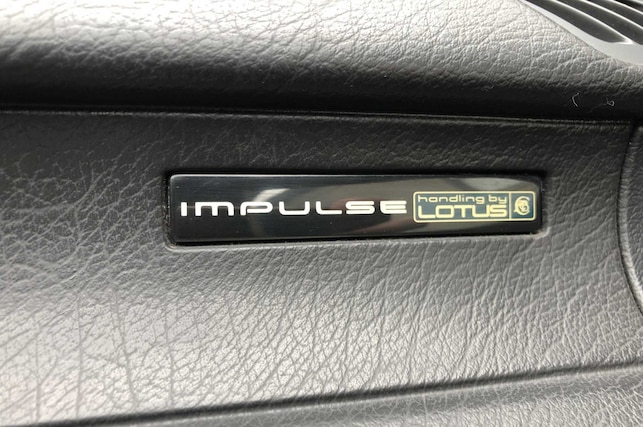 The original Impulse, known as the Piazza elsewhere, was based on the Asso di Fiori (Ace of Spades) concept designed by the guy who did the Lotus Esprit S1 and the DeLorean DMC-12: Giorgetto Giugiaro. It was basically a concept car design plopped straight on top of road-car mechanicals, and it got lots of attention at the time for the little automaker. The driving experience perhaps didn't live up to the promise of the sheetmetal. For the second-generation model, the situation was arguably reversed.

The design was done in-house at General Motors, taking cues from contemporary products like the Chevy Camaro. The semi-hooded headlights haven't aged as well as full pop-ups, but who cares when you've got a NACA-style duct plopped offset on the hood? The Impulse RS is as fun as it is tiny, packing 160 horsepower, 150 pound-feet of torque, a rear-biased 43:57 front-to-rear torque split, and Lotus-tuned handling. Fewer than 1,000 examples made it to our shores, and some much smaller fraction of that survive. Motor Trend drove one a few years back and found it to be a tossable partner in cornering fun, although by modern standards it's loud and crude-in an endearing way.

Super Street says: Okay, you got us—where the heck was this thing hiding all our lives?! It seems a shoo in to be among the pantheon of platforms we hold in the highest regard, except maybe it was a little on the hideous side. Alas, so few were made, no wonder it never showed up on our radar.

This white example on Bring a Trailer looks fairly clean and well-kept, with a few blemishes but just 104k miles on the odometer and wearing an understated white over a black interior. The rubber accordion shift boot and crazy gauge hood buttons never let you forget for a moment you're in a creature of the early 1990s. These rarely come up for sale, and many have rough histories with abusive previous owners. If you're interested in bidding, we highly recommend having it inspected by a specialist. Frankly, we recommend that for any auction purchase, but for something as uncommon as this it's an even better idea.