Letters To The Editor - In Box 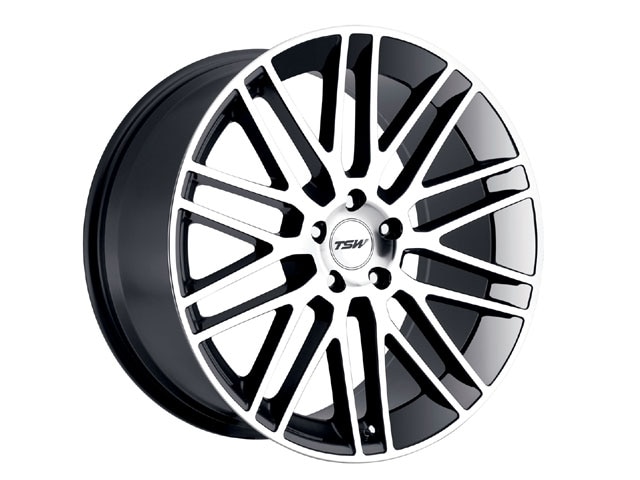 OK, wise-ass, so you need some space to vent. Here it is. Direct letters to the editor to sccnews@sourceinterlink.com and we'll do our best to come up with a snide response. Or completely ignore you. But hey, at least you've got a voice.

Free Stuff!
This month, we're buffering Micah Starr's 'Forbidden Zone' with a set of 18-inch Croft wheels from TSW Alloy Wheels. The Croft is available with a smooth mirror-cut face and a gunmetal or brilliant chrome finish. The Croft also features a hub-centric design for a smooth, vibration-free ride. For more info and applications, visit www.tsw.com. To follow in Micah's footsteps, send us your feedback to sccnews@sourceinterlink.com, or to Sport Compact Car - Inbox, 2400 E. Katella Ave. - 11th Floor, Anaheim, CA, 92806. 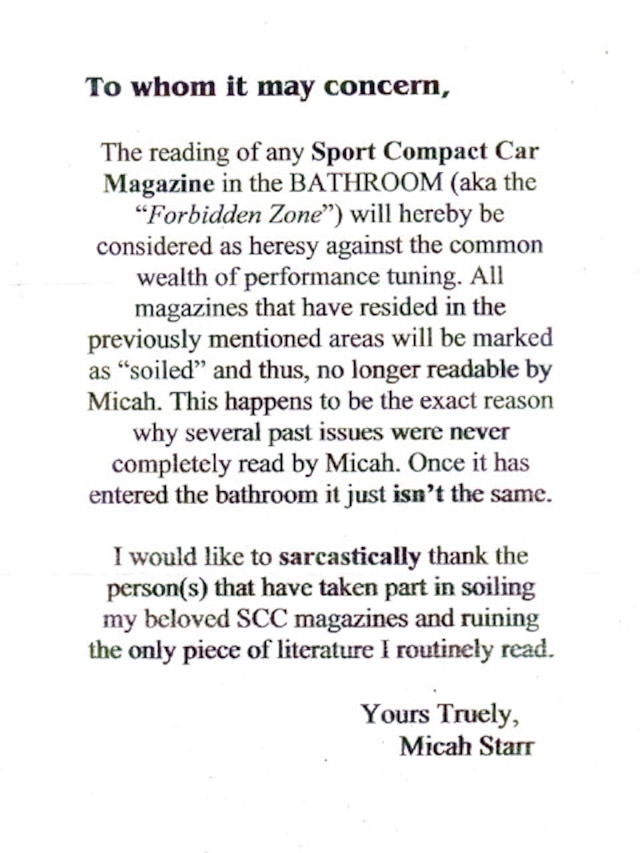 Letter Of The Month
Enclosed is a copy of a note my son, Micah, fastened to the bathroom door. I thought SCC would enjoy his devotion to your magazine. Micah has been a subscriber for close to four years. He recently graduated from high school, is attending college and works for Jason Hoover Motorsports. He, along with his three brothers, have inherited a love of cars from their father. As he states in his note, your magazine is his favorite form of literature. Once, as a freshman in high school, Micah informed me that he thought writing articles for Sport Compact Car magazine would be a good career. I agreed.

His note remains posted in the downstairs bathroom for all to enjoy.
Jo Ann Starr
Somerset, CA 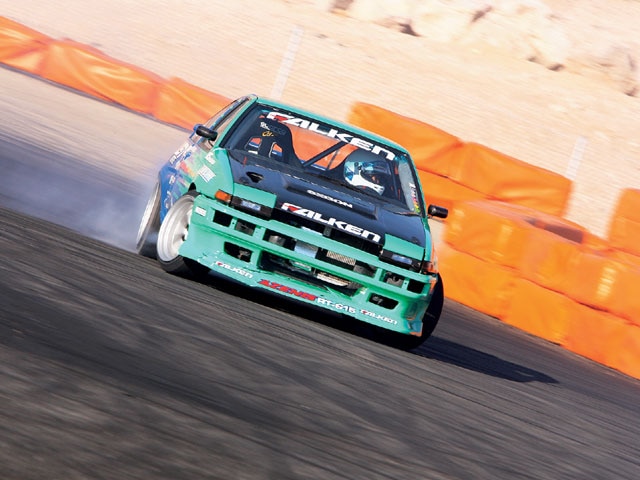 Initial SCC
One car I've kept an eye on for a while is the AE86 Corolla GTS. I'm a fan of Initial D and, even though some people might laugh, that show is what first got me into auto customization. I have a few questions. First, what is the difference between the American AE86 Corolla GTS and the Japanese Trueno? I really want to get a proper Trueno but, as it seems they're hard to find, I'd settle for a conversion. Also, I like the rims that were used on the car in Initial D and was wondering what the 'real-life' equivalent would be. And lastly, they talked in the show about a Formula Atlantic engine that could supposedly put out 240hp at 11,000rpm and is naturally aspirated. Whether or not this engine exists is a question I've been seeing in forums for quite some time, but nobody seems to have the answer. Is there really an engine that could do that? I'm still new to the tuner world, so please forgive me if any of my questions sound dumb (or if admitting that I enjoy Initial D makes me an outcast).
Chris Lingle
Plainfield, IN

Don't bother converting the bodywork or tracking down Initial D wheels for your AE86. Take a look at Project Corolla: the point of the AE86 is cheap, featherweight, rear-drive performance. Focus on the suspension and maybe an engine swap (the term 'power' is relative with an AE86). While the engine they refer to in the show is not an Atlantic engine, the Formula Atlantic 4AGE is real and dates back a few years to Toyota's involvement with the open-wheel racing series. Check out our April 2008 issue for more details; we tested Formula D driver Taka Aono's AE86 on the ghymkhana course, 11,000rpm 1.6-liter screamer and all. -JL

Beyond The Numbers
This letter is a bit of an oldie, but.... JL

I really enjoyed the 'Apex Predator' article in the October 2006 issue. The piece was well written, as always, but what caught my attention this time was a bit different from most. It wasn't the numbers, although 263hp is a lot of power and 155mph is really fast. And it wasn't the humor, although just seeing a new issue in the mailbox is enough to make me grin like a fool. What caught my attention was a single sentence toward the end: There is a deep sense of passion surrounding the Mazdaspeed3 that is absent in almost every modern car, factory tuned or otherwise.

Now, I like numbers; they're easy to understand, categorize, rank, prove or disprove. I use them at work as a software developer to describe the performance of programs. I get as excited as anyone else when it comes to measuring and comparing the performance of cars. It's just that numbers don't always tell the whole story and it's nice to read a review written by someone who agrees.

Since I'll soon be in the market for a new car-and since it garnered so much praise-I decided a Mazdaspeed3 would be worth a test drive, even though I really wanted something other than front-wheel drive. I've been dealing with the understeer from my Jetta for too long and I get a huge kick out of rally, so I was leaning heavily toward a Subaru. But that test drive totally changed my mind. I agree that the Mazdaspeed folks have a winning combination on their hands. You really can feel the difference between that car and, say, a new WRX. Keep that passion in your engineering.
Jason Porritt
Grand Rapids, MI

It's completely true that many cars are more than the sum of their spec sheets. The Miata is a perfect example. The little sports car that could is more fun to drive than cars costing two to three times as much. That's what test drives are for. Whether new or used, take that new project for a spin around the block and get a feel for the power, response, steering and everything else that adds up to a driving experience. Then make up your mind about what car is really for you. -JL

Safety first
I've been following your Project Evo IX, as I have an IX, and I'm doing a lot of the same mods. For instance, I put in a Sparco harness bar and harness (only mine is with the stock seats plus a four-point). In your last article, you stated that it was best to mount the lap belt to the floor with i-hooks and not to the factory mounting points. On the Evo, the factory mounting point is the seat bracket frame, on the buckle side. Why would I not attach it to the same place the factory did?
Paul Hignutt
Nashville, TN

As per Takata's recommendation, if a car has a seatbelt mounting point that is higher up on the seat bracket and not on the car's frame or body, there might not be enough adjustment or room for the harness lap belt to function properly. In the case of the Evo, the seatbelt is mounted to the seat bracket and thus one would need to mount the lap belt to the car's body. This is simple enough for the outer side, as the eyebolt replaces the lower seatbelt mounting bolt through the rocker. But on the inner side, all chassis mounting points are hidden by the Evo's center console, necessitating a bolt through the transmission tunnel. Also, be sure to use an adequately large backing plate on the underside of the car. -JL

Truly nuked
After reading your update of Project SVT Focus in the November 2007 issue, I think your perception is a little off. I have one of these little machines and, like you, also applied boost to the stock 10.2:1-compression motor, via a Procharger. Although I was only running 10psi of boost, I had a similar result as Mr. Holstein. I was going through the gears and, at the top of second gear, my car decided to lean itself out to a nice 17(ish):1 air/fuel ratio. This resulted in a noise no one ever wants to hear, an expensive noise. You say: A postmortem examination found completely nuked pistons. I have included a picture to improve your perception of the word 'nuked'. This is what used to be a piston.
Kevin Lewis
O'Fallon, MO

Project SVT Focus did not fare well from the copious amounts of detonation that originally trashed the engine but, after disassembling it, we knew we had seen worse damage. After seeing the photo of your own SVT project, we have indeed have seen worse. Our hats are off to you, sir, that is nuked. -JL

Contact Us
Letters to the Editor
Our e-mail address is sccnews@sourceinterlink.com.
Our fax number is (714) 978-6390.

Letters To The Editor - In Box
Photo /