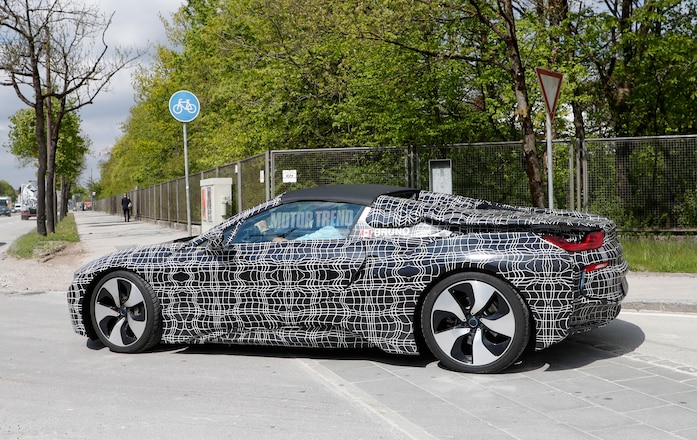 Years after the arrival of the coupe, the much-delayed BMW i8 Spyder appears to be ready to make its debut, at least if this prototype that was recently spied cruising German city streets is any indication.

Visually, there are a few subtle changes in the grille, side skirts, and rear. Given that the i8 is about due for a facelift, it's not certain if these are specific to the convertible.

The key difference is, of course, the roof, which is now made out of a fabric material. It's styled to look more like a targa-top than a traditional convertible, with the canvas roof likely sliding beneath the rear cover. 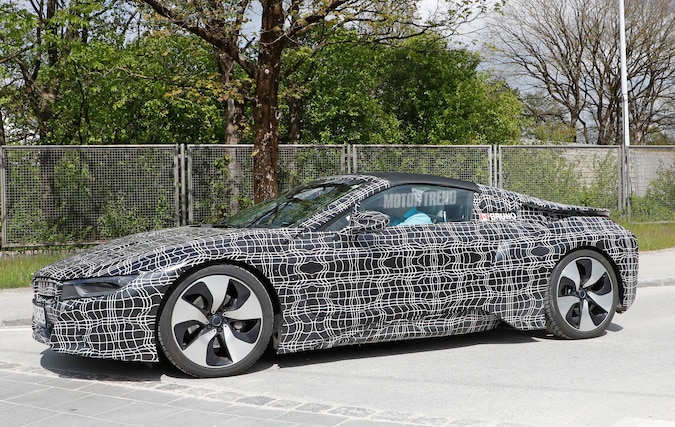 One open question revolves around the i8 Spyder's doors. Although the Spyder uses a frameless window design instead of the coupe's fully framed side glass, it retains the front part of the window frame. As such, it's possible that the removable-roof i8 will keep its fixed-roof sibling's fancy butterfly doors.

Currently, the BMW i8 is powered by a turbocharged 1.5-liter I-3 good for 228 hp and 236 lb-ft of torque and an electric motor that makes 129 hp and 184 lb-ft of torque. The powertrain enables the hybrid sports car to hit 60 mph in 4.2 seconds. There have been rumors of BMW is working on a power upgrade of roughly 10 percent for the i8. If that's accurate, we should see that reflected in the i8 Spyder's specs when it is finally unveiled, possibly in September at the 2017 Frankfurt auto show. 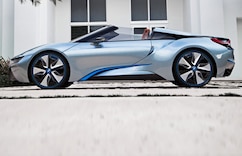 A BMW i8 roadster is planned for 2018, while a highly autonomous new "i" series model will arrive early next decade. 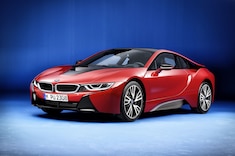 BMW has revealed a limited-production model of its PHEV sports coupe dubbed the BMW i8 Protonic Red Edition with unique interior and exterior details. 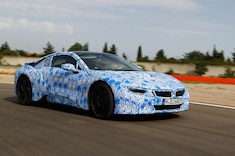 The preproduction 2014 BMW i8 is nearly silent, a slight whine from the front-mounted electric drivetrain makes it into the cabin.

Come with us as get some seat time in a 2015 BMW i8, a hybrid vehicle that we wouldn't mind commuting in.