Home  |  Features  |  News  |  Spied! Could This be a Prototype for a Future Ferrari Dino?
Subscribe to the Free

Spied! Could This be a Prototype for a Future Ferrari Dino? 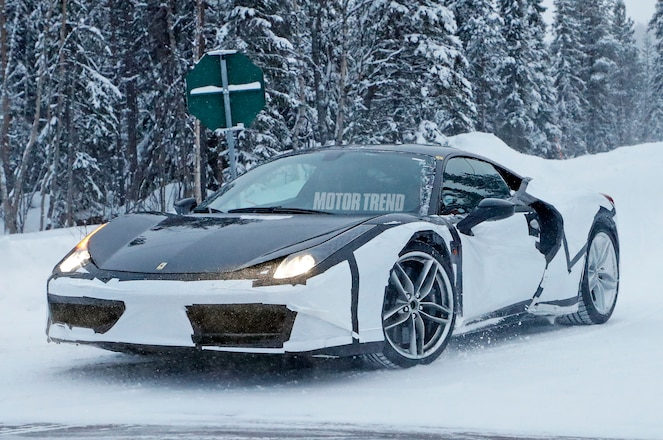 A mystery Ferrari bearing elements from both the 458 Italia and 488 GTB was spied recently during cold-weather testing in Sweden, a possible sign that the long-rumored return of the Dino may be upon us.

Up front, the hood and headlights appear to be taken directly from the 458. However, the taped-up bumper features a solid center element absent on the 458 and 488 alike.

Move over to the side and you'll first notice the 488-sourced wheels before your the large intake in the quarter panel catches your eye. The 458 doesn't have a quarter panel intake period, while the size and position of the 488's is completely different. 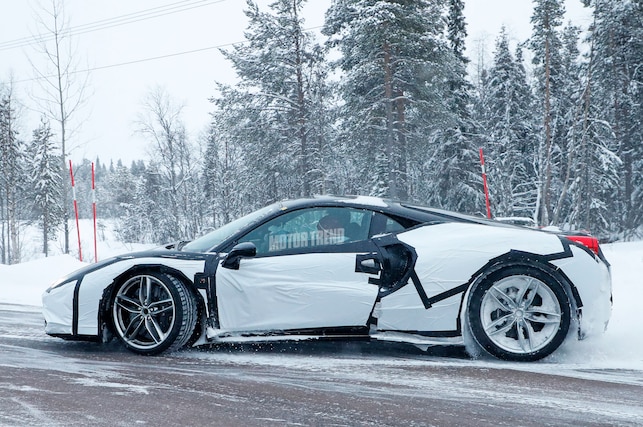 Around back, the car also looks much like a 458 save for the lower fascia and exhaust configuration. Instead of the 458's center-mounted tri-tip exhaust, this car features a more conventional dual exhaust. The design also appears to be more aggressive, with snow finding some space to pile up, though it's also possible that the bumper is simply unfinished and not ready for primetime.

According to our spy photographer, the test mule didn't sound like it had V-8 power, further hinting that this could be the Dino, a car that's historically been V-6-powered. Alfa Romeo's 2.9-liter twin-turbo V-6, which was designed by Ferrari and is closely related to the F154 V-8 used in the 488, California T, and GTC4Lusso, is one potential candidate. The mill has both the output (505 hp and 443 lb-ft of torque in the Giulia Quadrifoglio) and sound (courtesy of its 90-degree configuration) necessary for duty in a prancing horse. Reusing existing hardware is one way to get the price down to the Dino's rumored $200,000 range, so sourcing a twin-turbo engine from Alfa and other parts from the 458 and 488 could make sense. 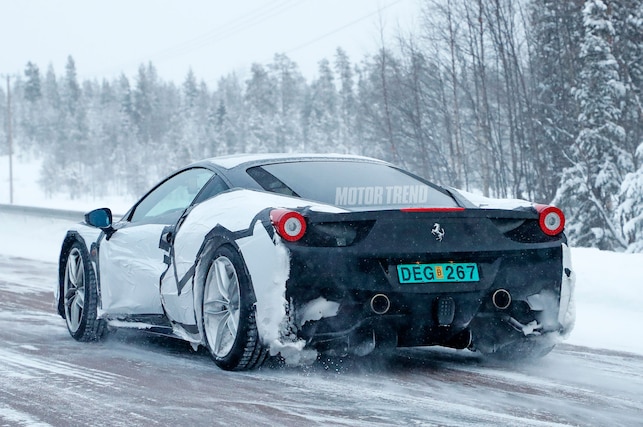 The Dino is also said to be shorter and slightly narrower than the 488, but it's impossible to determine this car's without a frame of reference.

Given the fairly lightcamouflage on this car, it may be just about ready for its auto show close-up. Back in 2015, Fiat Chrysler CEO Sergio Marchionne said it was "not a question of if but when" we would see a new Dino. If this is that car, the "when" could be very soon.

Spied! Could This be a Prototype for a Future Ferrari Dino?
Photo /