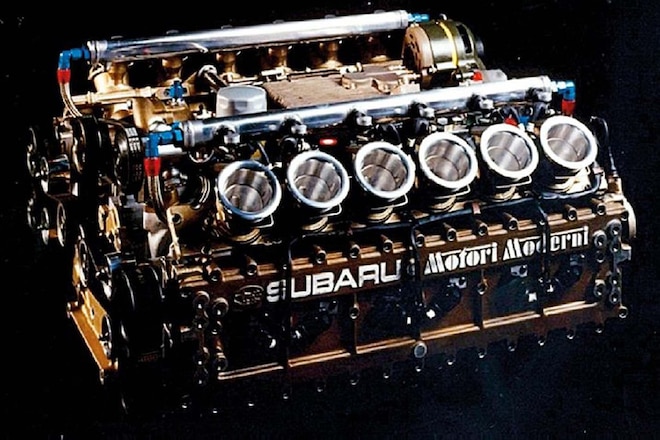 Super Street: Sounds pretty incredible, right? Who wouldn't be interested in seeing what could be created with a giant blank check to support a flat 12 with individual throttle bodies and as much technology as Motori Moderni could pack into it for competition use? More importantly, why haven't you heard about this 12-cylinder marvel prior to this written piece? Well, part of the mystery revolves around miscalculation by the powers that be but more specifically, throwing dollars at something that was all but doomed from the start, at least in technical terms and competitive functionality.

MotorTrend: Subaru's racing efforts are renowned by enthusiasts far and wide, as the underdog Japanese brand scored legions of fans—and championships—during the 1990s and 2000s as one of the dominant players in World Rally Championship (WRC) competition. (Its wide lineup in the Gran Turismo PlayStation game series didn't hurt, either.) In short order, four-wheel drifting glory became a key part of its identity, fostering tons of press and boosting global sales of the company's all-wheel-drive turbo sedans and wagons.

Far less ink has been spilled about the automaker's less successful bid to shine in the context of a different motorsports institution. In fact, well before rally ever entered the picture, Subaru was determined to highlight its engineering prowess and turn the heads of enthusiasts who had largely written off the quirky brand—by cracking the ranks of Formula 1.

To get started, all it needed was an engine. Unfortunately, that powerplant turned out to be the Subaru flat-12, the largest and ultimately least-successful design in the company's history. 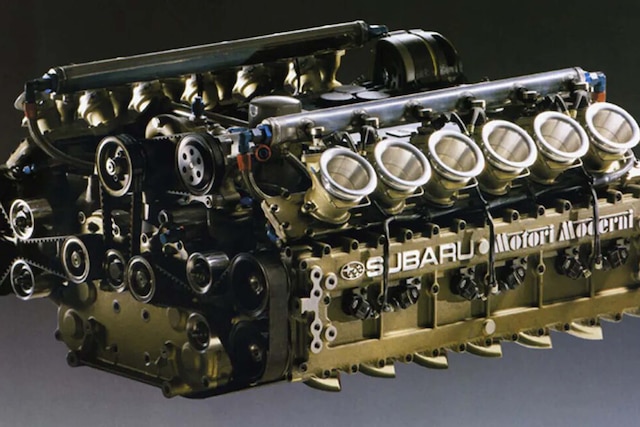 The late '80s were a boom time for the Japanese economy, and its auto industry celebrated the island's financial windfall with all manner of expensive expansions, branding schemes, sports cars, and racing teams. Eager to get involved, Subaru realized that it couldn't match Mazda's upcoming RX-7 or Honda's nascent NSX in the showroom. Yet, there was no reason why it couldn't underwrite a fledgling F1 team as an engine supplier.

Of course, 'supplier' came with an asterisk. With virtually no experience in the world of high-end competition, Subaru contracted Motori Moderni to serve as its chaperone into the F1 scene. The firm came with an open-wheel pedigree established by Alfa Romeo, as Moderni's owner and manager, Carlo Chiti, had enjoyed racing success as the Italian marque's chief engineer before parlaying his reputation into serving as a private engine builder for the Minardi and AGS teams

Although recent rule changes had Chiti shopping a 3.5-liter V-12 to F1 teams at the time, Moderni was all too happy to switch things up and build a "boxer" engine that would bolster Subaru's brand at the pinnacle of racing. With nothing but flat-fours and flat-sixes in its portfolio, a flat-12 seemed like the next logical step, as it would embody many of the same engineering principles (particularly a low center of gravity) that the company touted when advertising its street lineup.

Unfortunately, the 3.5-liter flat-12 developed by the Subaru/Motori Moderni partnership ended up emphasizing the boxer engine's negatives rather than the positives when employed in a high-performance environment. The first issue was weight: When fully dressed with its accessories, the motor was almost 250 pounds heavier than a comparable Formula 1 V-8. That issue was compounded by the fact Moderni was never able to squeeze more than 550 hp or so out of the unit, which meant it was down by as many as 100 horses compared to some of its rivals on the qualifying grid.

When outfitted to the Subaru works car, a Coloni C3B designed by Christian Vanderpleyn, the porky, wheezy 12-cylinder motor posed yet another problem. It seems that the dimensions of the engine (which had been dubbed the Subaru 1235) were such they required the use of side-pod air ducts rather than the original airbox the C3 had been designed for. Not only did the ponderous motor placement disturb the aerodynamics of the chassis, but it also made it impossible to take advantage of venturi tunnels sculpted into the underside of the car, further reducing the Coloni's downforce. 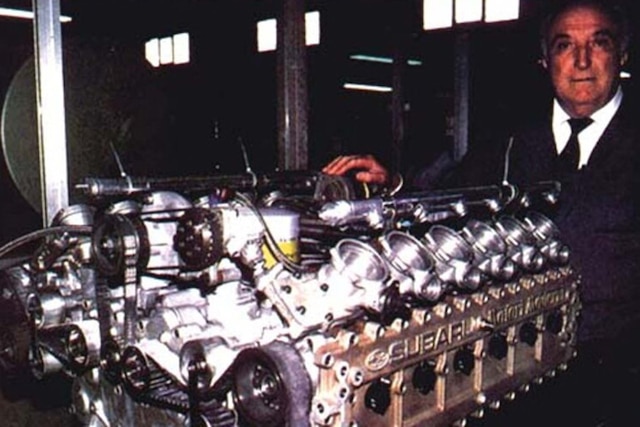 Predictably, a Subaru/Coloni package that was overweight, underpowered, and not nearly as sticky as the competition had great difficulty even making it onto an F1 starting grid. After a mere eight races of trying, and failing, to pre-qualify for an event during the 1990 season, Subaru would cut ties with Motori Moderni, leaving Coloni to swap in the previous year's Cosworth V-8 for the remainder of the schedule. This, too, would be a failure, resulting in a lost year for the team and a dodged bullet for Minardi, which had originally tested the engine before its agreement with Subaru fell through.

The Subaru 1235 story didn't end in F1 ignominy. As with any exotic powerplant abandoned by the upper echelon of motorsports, there was no shortage of suitors game to leverage the automaker's huge investment to their own gain. The first was Alba Engineering's Giorgio Stirano, who counted himself lucky to stumble across a viable 3.5-liter powerplant for his Group C prototype program in a year where recent rule changes from the FIA had forced out many manufacturers and teams. The same problems that had plagued Coloni would also haunt Alba throughout 1990, with poor aero and a terrible power-to-weight ratio rendering the Alba Formula Team entry regularly 20 to 30 seconds off the pace before imploding at Spa.

Group C would be the final nail in the competition coffin for the Subaru 1235, but there were still potential clients out there in the world of bespoke luxury automobiles. Both Dome (famed builders of the Zero, as well as numerous Toyota race cars) and Christian von Koenigsegg would give the flat-12 a try-out in the Jiotto Caspita and the original Koenigsegg prototype, respectively. Built for Jiotto Design Studio, Dome's mid-engined marvel actually pre-dated the Subaru engine's F1 appearance, with initial models equipped with the 3.5-liter engine shown off at the Tokyo Auto Show in 1989. Subaru axing its F1 program quickly put an end to Dome's interest in repurposing the flat-12 for the Caspita, with Jiotto boss Kunihisa Ito turning to a more conventional V-10 power plant.

Divorced from its disastrous on-track returns, the engine had a much better chance in Sweden, where it caught Koenigsegg's attention thanks to a chance encounter with a friend of Carlo Chiti. Bored out to 3.8 liters, the engine was now pushing out 580 hp at 9,000 rpm. After striking a deal with Motori Moderni, the unit replaced the Audi V-8 that had motivated the original Koenigsegg prototype in 1996. The death of Carlo Chiti soon after the flat-12 was installed in the car spelled an end to Motori Moderni and Koenigsegg's supply of engines. While Koenigsegg bought designs and tooling for the Subaru 1235 at auction, he ultimately deemed it too complicated to produce in-house.

For Subaru, staying on-brand meant sacrificing any chance to be competitive in F1. The issues surrounding the 1235's weight and difficult placement in the F1 monocoque of the era could have easily been predicted, not to mention the fact it had been nearly a decade since any other team had successfully fronted a flat-12 engine. Ignoring all of these details and choosing to govern the Coloni team by decree rather than the realities of the sport guaranteed a poor showing for Subaru and made its boxer design the laughingstock of the circuit—the net opposite of what had been hoped for by company executives.

Although the 1235 flat-12 remains a sore spot in Subaru's history, it could be argued that the company got off easy compared to some of its in-country rivals during the bubble era. Subaru would never again commission a bespoke engine or compete in anything resembling the upper echelons of open-wheel racing. Then again, the company did not have to deal with the fall-out from developing luxury brands that never saw the light of day or dump huge sums into high-tech sports cars that were quickly crushed by the rising yen and then hollowed out by the crashing economy.

Three years after the F1 disaster, Subaru would debut its Impreza-based rally team and discover that showroom-based cars offered a much more successful outreach into motorsports. Specifically, rally racing tied the company directly to customers who could show up at a dealer following the latest victory and drive home in nearly the same car they had seen on TV the weekend before. Embracing this successful philosophy guided the next two decades of Subaru's product planning and competition and took a bit of sting out of the flat-12 debacle.

The Legend of the high-revving Honda S2000 Roadster
SuperStreetOnline features