The Year of the Clutch - Terminal Victory 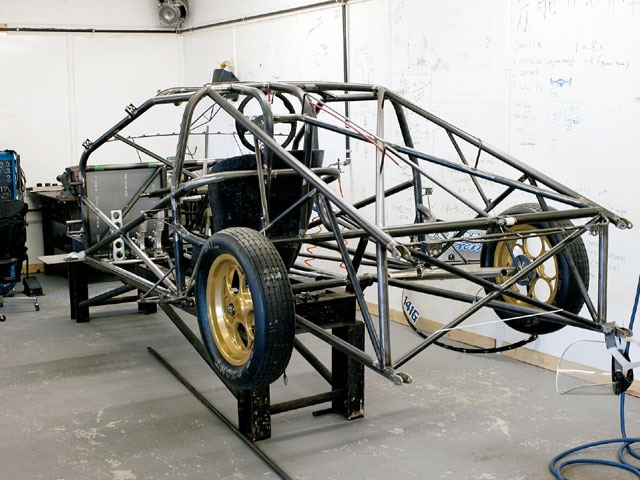 I watched hundreds and hundreds of front-wheel-drive Hot Rods and Pro front-wheel drive cars in 2003. It was reminiscent of the late '60's Top Fuel cars: no clutch technology and spinning the tires as a means of getting the car launched and down the track.

The problem is that while you're spinning the hides, you ain't going to cut a decent 60-foot time and the car will be hard to set up with any predictability. The narrow powerband and high-revving nature of our engines just makes the problem harder to solve.

I figured you could just bolt bigger tires on and fix the traction problems. Wham! The 60 ft. times should plummet.

So, we put 12-inch tires on Chris' car and went to a sticky track near my shop in Rockwall Texas for a solid day of testing. Chris's 2003 Celica runs a standard Tilton three-disc carbon clutch with high spring pressure (a good piece) and he uses a state-of-the-art Motec computer/data logger. I thought we should be able to make some changes and get the tires to work. Wrong.

Over an extensive test session, we softened the clutch and tried all kinds of air pressure and tire compounds. It would simply spin, bog or shake your guts out on every pass. We never got a single, good 60-ft. time.

I was wrong. But I knew that there had to be an answer.

Then I got it: Everybody is slipping the tire to get a good launch. We put the 9-inch tires back on the car, worked with the data, and late in the year in Fontana we ran in the teens. It's definitely a hit-or-miss deal as track conditions, temperature and tire pressure all play a part. Now I understood why most of the faster cars' e.t.s weren't very consistent.

Obviously, spinning the tires is not the ideal way to launch, but when you're running a big tire, you have to have some slippage in the drivetrain to avoid tire shake. The answer has to be a reliable and predictable "slipper" clutch system.

I predict 2004 will be "The Year of the Clutch" because a slipper clutch is really the only way to control the launch with any predictability. Guys like Sean Carlson and a few others are experimenting with slipper clutches and once someone figures it out, we'll see big improvements in 60-ft times and consistency.

After each run, we look at the feedback from the computer and make the necessary adjustments. Over time our database will enable us to set up the clutch release accurately and the system will enable us to run much bigger tires than we ever have in the past.

As a result, we should see much better e.t.s due to improved traction.

Top Fuel and alcohol domestic race cars have perfected this deal with C02 and timers. The NHRA doesn't allow computers to control the systems, but you can bet your last dollar these systems have been modeled with a computer and are data logged with a computer.

That's one of the great things about the sport compact racing scene. We can use modern technologies to look for answers to our very unique issues. The physics of a front-wheel-drive racecar demand a different approach and I'm sure we'll see massive advances in 2004.

The Pro-FWD Class will see several new and radically different cars debut this year. The question is, who's going to be the first to figure out the dynamics of controlling the launch?

One thing I can guarantee is I'll be working as hard as I can to make 2004 "The Year of the Clutch."

The Year of the Clutch - Terminal Victory
Photo /