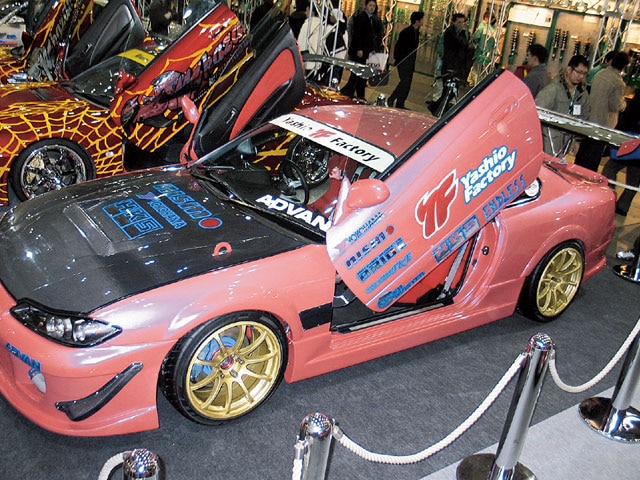 Best Motoring: FujiFastBest Motoring International has long produced some of the finer import videos, so we had high expectations for this DVD and thankfully we were not disappointed. "FujiFast" is a reference to Japan's legendary circuit track that opened in 1966. After 37 years of continuous operation it is closing its doors for a two-year renovation that will produce a new layout and facility upgrades. The Fuji track is considered Japan's fastest track due to its 1.4-km straightaway. Having heard about this famous track, the DVD provided a nice inside peek into the track's operation and history. Several retired Japanese racecar drivers are interviewed about their memories and impressions of the Fuji track.

The most interesting tidbit was a discussion regarding one-lap tires. We know race crews go through a lot of tires but we never heard of tires good for only one lap! They also discussed the merits of the 1990's Group C racecars that ran up to 1200 hp (at a speed of up to 390 km/h), which is impressive considering current F1 cars run about 800-plus hp. Something else we didn't know about the Fuji track was that the best track time was run in 1993. It is always interesting to me that even with the advances in automotive technology, 10 years later we still can't beat that track time. BMI concludes this portion of the DVD by taking the legendary Hakasuka GT-R out on Fuji for its final run on the track.

In the second section, BMI recounts the past battles it has filmed since 1998, often on the Fuji track. In the history of BMI's battles we learn that a Ferrari F355 posted both the best track time and fastest kilometer per hour. As a final farewell run on the Fuji track, BMI runs a battle between an R34, EVO VIII, WRX STi Spec-C, NSX Type-R (second-gen.), Ferrari 355 F1, Ferrari 360 Modena F1 and a Porsche GT3.

The third section features two JDM sport driving platforms, the Nismo S-tuned Z33 (our 350Z) and the TRD-tuned Altezza Super Street Model (our IS300). While the S-tuned Z33 is for the street, we would like to see how the R-tuned model for track performs.

Probably my favorite feature of this DVD was the JGTC (All-Japan Grand Touring Car Championship) coverage of the 2003 season opener. Getting the behind-the-scenes footage of the action in the pits as well as drivers' comments is really cool. It was a great race to watch with all of these GT-Rs and Supras battling it out on the course.

For all you drifting fans out there, there is plenty of that too. "Hot Version" magazine brings you "Touge Showdown Max." Hitting the mountain roads are the Manubu Orido (GT500 driver; judge in the U.S. D1 Grand Prix), Nobuteru Taniguchi (GT300 driver and pro drifter) and, of course, the Drift King himself, Keiichi Tsuchiya. Competing in the "touge" (pronounced toe-gay) are three Nissan Silvias: Kei Office, Champ and the daily-driven Yashio Factory. Also in the competition are an FD RX-7 by Yomekobo, EVO VII by Boss, EVO VII by Mines and an Espirit NSX. There's great drifting footage although the outcome looks rigged.

To conclude the drifting segment Orido and Tsuchiya go heads up in the NSX and Kei S15 with Taniguchi following in the S2000 camera car. They run "Initial D" style back and forth until a winner is declared. What you see in this touge racing is that it requires a higher level of tuning since there is less of a margin of error than in track racing, where you can just spin out when things go wrong.

The second to last feature is of the Mazora and Tom's Spirit Altezza racecar. It is the most heavily modified IS 300 we have ever seen.

The DVD concludes with bonus footage of the 2003 Tokyo Motor Show with a tour of highlights given by Professor Nakaya. Among the highlights are the new Subaru Legacy motor, Honda HSC model with a horizontally mounted V6 engine, Nissan Fuga, Peugeot Tarmac Spyder, Mitsubishi EVO VIII MR, Harrier SU HV1 hybrid (our RX 330) and the Mazda RX-8 Hydrogen RE. Finally, we get an tour of the new Porsche Carrera GT with a cool 360 km/h speedo.

This is the best Best Motoring DVD we've seen. It has loads of footage and a wide array of features. Unlike a lot of their videos in which we just see a battle, in this one we see JGTC, touge, and more. BMI shows cars and events we care about and presents them in a professionally produced product. No bumpy hand-held camcorders here. They win with both quality and quantity. Check out www.bestmotoringvideo.com for more information.