Like Molten Lava From A Dormant Volcano, Brandon Lee's AE86 Is Set To Blow The Top Off The Island's Drift And Racing Scene. 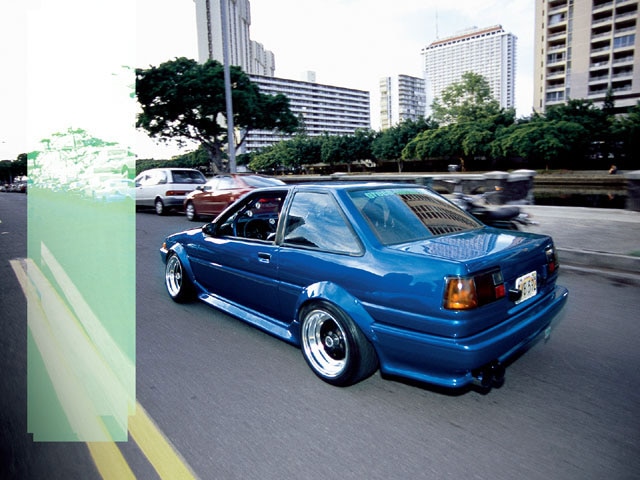 Although known as interstate highways, the roads around Hawaii don't connect to another state. While stretches of American "superslab" roll on for what seems like an eternity, Oahu's interstate circles the island like some sort of giant racetrack. It was here on a stretch of slightly moist tarmac on the windward side of the island that Brandon Lee got a chance to toy with us in his 1984Toyota Corolla GT-S.

Lush vegetation climbed the hill to the right of us while a rocky outcrop led out to sea on the right. The Big Wave surfing competition a few days earlier had been just that, with thirty-footers pounding well past the shore and leaving a fair amount of debris across our two-lane track as it rounded it's way around the island in a series of esses.

Without warning, Brandon pulled a Scandinavian flick, weighting up the rear and sending us into a diabolical drift. Man, machine and nature came together in a fabulous triad as he clipped the foliage at the apex and got a rear wheel off at the exit.

"I have a hatchback but I find the coupe easier to control," says Brandon casually over the din of the spinning tires and force-fed inline four as we rocket toward the next curve. "I just wanted a coupe because everybody else seemed to want the hatch."

Unless you've been living in a cave the past four years, you know that vintage (pre '84) Toyota Corollas have gotten hotter than a Hawaiian golf course. Just take a look at this recent exchange from an enthusiast Web site.

Ricer 2: DAMN DAWG, you're gonna be the best drifter in Kansas!

Before we go making light of the AE86's newfound popularity, a brief history lesson is in order.

The rear-wheel drive Toyota Corolla was first introduced in Japan in 1966. Two years later it was brought to the United States to replace the unpopular and barely noticed Crown.

It lasted only two years with its original 1.1-liter engine, when a larger 1970 model appeared, powered by a "much larger" 1.2-liter engine. This new model actually became the second highest-selling import car in 1970. For 1971, the engine was pushed out to 1.6 liters to be more in tune with American tastes.

The Corolla's strongest popularity came in 1974, with the third generation, including the inexpensive Corolla Tercel. It was the best-selling vehicle in the world from 1974 to 1977. Five years later, in 1979, the fourth generation appeared, still with rear-wheel drive.

When the fifth generation Corolla appeared in 1984 it came with front-wheel drive and a coupe version, the GT-S, with a 16-valve engine. The GT-S remained in production through 1991.

It was before this FWD model that delivery drivers like the one in the anime series "Initial D" started looking for quicker routes around the corners of the various mountain passes they had to navigate. The AE86 proved to be as proficient a drifter then as it is now.

While the RWD platform stopped production in '84, Brandon acquired his first Hachi Roku around 10 years later when he first learned to drive. It was an '84 SR5 Corolla.

At first he started to build the Corolla like most others employing mostly bolt-ons such as headers, exhaust, MSD coils and bigger cams. Another bolt-on came in the form of a $600 T-25 turbo from a friend.

A risky proposition for an engine with 220,000 miles and stock blue top bottom end. The engine ran for about three weeks before the #4 piston cracked. Cylinder #1 responded to the cracking by melting. When there's a crack party like that it's time to go to rehab.

"I thought about just putting in another stock block but I decided to do it the right way. I downed the car for a year and started to buy parts like crazy," said Brandon.

One of the first parts he acquired was an AE101 block from a Japan-only FWD '91 Corolla. It is a seven-rib block with incorporated oil squirters as opposed to the USDM five-rib '84 block. The AE101 was built to handle the extra power made by the supercharger found on the aforementioned Japan-only 16-valve Corolla.

The blue-top (pre '84 Corolla) heads have better flow characteristics than those found on the AE101 so Brandon had one ported and polished before attaching it to the short block.

At this point, Brandon decided he wanted to go with individual throttle bodies. The problem was, all of the accompanying manifolds looked like crap.

This is where his friend Brandon Murikami comes into the story. Being a machinist, Murikami became a key character in the development of the Corolla's new engine. He and Brandon designed the manifold to fit the individual throttle bodies from a '91 Corolla.

To get a finished piece, the process took about three months from drawing board to CNC machine. It had to be remade a few times as it was off by a few millimeters the first few times. Of course, all of this was done in Brandon's spare time when wasn't working at Pearl Harbor.

With the manifold in place, Brandon could install the turbo. At first, he went with a T-3 J-Spec turbo from Malaysia as it was the only one he could find. This, combined with the SDS ECU, proved to be a real hassle to tune. In the end the problems they encountered appeared to be a factory glitch occurring at the same boost level and rpm on another Corolla.

Before all of this balderdash, Brandon drove an SR5 with no intercooler and piping of no more than a foot and a half from the intake to the turbo manifold.

"I loved that setup," said Brandon. "That thing spooled up at like 2000 rpm. It was after that that I decided I had to go turbo."

Presently, the engine is running a Garrett T-28 ball-bearing turbo with a few other custom parts like the downpipe and custom manifold. A 264-degree cam is used at the intake while a 258-degree bumpstick is employed at the exhaust. These Kamikazee units are meant for mid-range power in an N/A motor but they seem to suit the forced-inducted setup quite well.

Currently, the car is running an Autronic ECU with an accompanying wiring harness. Purportedly, this Australian-based company is run by the main designer of Motec.

"This system that Justin Izumi installed for me along with the new harness is amazing," says Brandon. "You can do just about anything with it."

As of press time, the Corolla has yet to be dynoed with the new Autronic. But with the SDS and 6 psi, it made 200 hp at the wheels. By the time this issue hits the newsstands, Brandon and Co. will have run the engine at 1 bar, considered the point to which the T-28 is reliable. Should everything fall into place, the engine should churn out close to 300 hp.

Hawaii is replete with awesome forces. From potentially powerful volcanoes to monster swells that can churn a man like a sock in a washing machine. Brandon's AE86 personifies the rugged side of the islands with big power, an excess of JDM styling goodies and a high degree of attention to detail and it's easy to see how he owns the islands, either going straight or sliding sideways.

Brandon would like to thank everyone at:
Endless Garage: Marcus, Arron, Justin, Mike, Barry, Brandon F, Brandon M. Ryan and Jay at Tech One Customs. Grant at FateImports.com. Scott, for all the parts I got from you over the years. My Mom, Dad and Christina for putting up with everything.