Watch a Ferrari 488 GTB Drift Around the Streets of Barcelona

Empty streets make the perfect playground for the Ferrari 488 GTB. 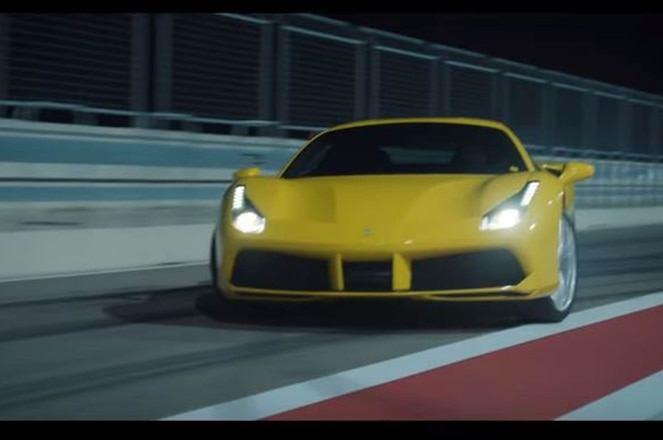 Pennzoil has kicked off a new video series set to showcase underground automotive enthusiasts called "Joyriders" that are constantly pushing the boundaries of performance. The first video features a yellow Ferrari 488 GTB drifting in the heart of Spain.

The video has a secret-agent vibe, with the driver going to a locker, finding keys to the car and a location written on the back of a business card. The mystery man then fires up the Ferrari, and shreds a racetrack in the dead of night before hitting the streets of Barcelona. Though we see the well-dressed joyrider get into the car, it's actually racer and stunt driver Rhys Millen that's drifting the snot out of the quarter-million-dollar Ferrari.

The video itself showcases Millen's skills and the raw power and performance of the latest Ferrari. Speeding under a gate arm is no issue for the low 488 GTB. Blue flames escape the exhaust as he hits the empty streets of Barcelona and we see the performance figures climb higher on the data logger.

Pennzoil teased the new series with a prequel released late last year, with a Dodge Challenger as the star of the short video. Like with the Ferrari 488 GTB, the Challenger carves up an empty city after hours, with the joyrider testing the performance and capabilities of the muscle car.

If you've ever wondered what it would be like to drive all-out on empty city streets in either one of these powerful machines, watch the videos below to see all the crazy action and hear some amazing engine notes.