Home  |  Features  |  News  |  Watch the Koenigsegg One:1 Return to the Nurburgring
Subscribe to the Free

Watch the Koenigsegg One:1 Return to the Nurburgring 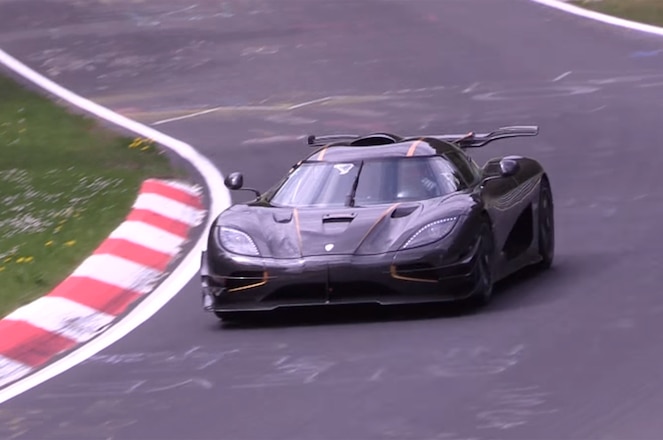 After entirely too long, Koenigsegg could be in the process of staging a world record run at the Nrburgring in the almighty One:1. Following araft of setbacks in 2015, the Swedish supercar-maker was recently caught testing on the grueling circuit in an example of its genre-defining hypercar.

Following the tragic crash of a Nissan GT-R Nismo GT3 earlier last year, the governing body overseeing the usually free-for-all Nrburgringimposed a list of speed limitsfor certain areas of the track and suspended any attempts at setting a lap record. Koenigsegg, who was geared-up and ready to make a strong sprint for the world record for fastest production lap, was caught in the crossfire, unable to get clearance to run without the imposed speed limits.

Now that the Nrburgring has returned to an unrestricted state, the One:1 was caught on video blitzing through a portion of the 150-odd corners on the lengthy track. In the video, the One: 1 makes a mighty sound and appears downright menacing as it slices through the circuit.

The return of 'Segg is no surprise as the automakerannounced earlier this yearthat eagle-eyed attendees would likely see the One:1 stalking the track. It warned, however, it might not be in the capacity in which fans would like. Instead, the One:1 must undergo rigorous testing before the official run is made. After testing is complete, the car needs a hugely talented driver who is intimately familiar with the 'Ring, and one who is comfortable behind the wheel of the 1,341-hp car.

For now, you won't get the pleasure of seeing the full-bore One:1 lap run, but seeing and hearing the car back on the 'Ring is heartening enough.

Take a look at the Koenigsegg One:1 return to the Green Hell in the video below.

Watch the Koenigsegg One:1 Return to the Nurburgring
Photo /