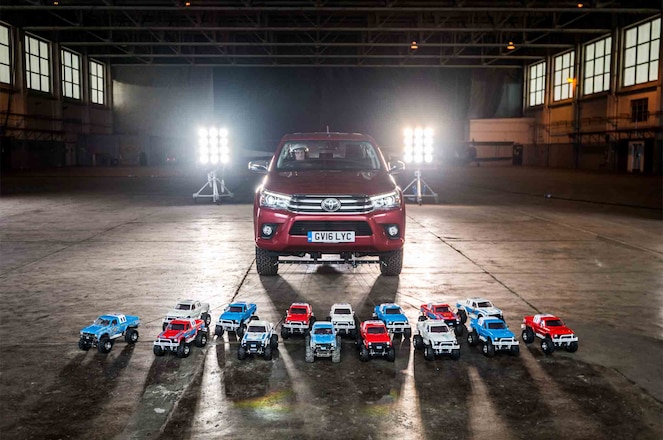 Toyota has made a short video demonstrating that, yes, 15 miniature toy cars can tow a real-life pickup truck.

Taking inspiration from a similar stunt performed in the 1980s, Toyota strapped up its Hilux pickup to a group of Tamiya Bruiser remote-controlled trucks. With a gross vehicle weight of more than 7,000 pounds, the Hilux has become heavierover the years, making the towing challenge even more difficult for the little cars this time around. Fortunately, each Bruiser can create 4.4 pounds of pulling force, which proved enough to get the Toyota truck moving. The Tamiya Bruiser is a 1:10 scale model based on an earlier design of the Hilux and weighs just 7 pounds, but its 4x4 capability proved size is no obstacle for tough tasks. 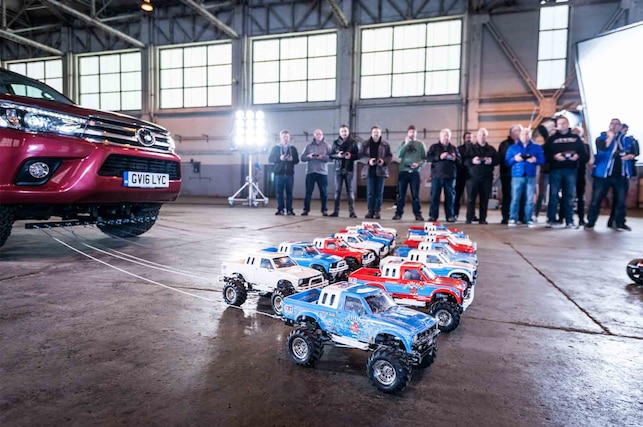 For added traction, testers placed a small weight behind the cab section of each Bruiser. A special towing bar with 15 separate eyelets was bolted to the Hilux's standard front tow points, allowing the truck to connect with the model vehicles. Once hooked up, the Hilux engine was shut off and the transmission was placed in neutral.

Toyota says it didn't resort to any special tricks and that the towshows off the truecapabilities of the Hilux and Bruiser. The only difference is the Bruisers, of course, were operated by radio-control model experts that synchronized the movement of the cars and ensured optimal power delivery for the tow.

Watch the video below to see the tiny Tamiyas tow a Hilux pickup. And check out the Toyota UK YouTube channel where you'll see the Hilux and its miniature companions tackling other tasks such as mud and water. 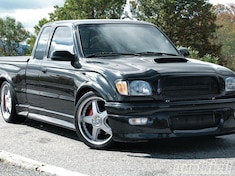 In this edition we have Rick Emerson’s 2003 Toyota Tacoma S-Runner from beaters to show-winners to drag cars, we don't discriminate. So send us your submissions, but make sure to include the information below and at least one picture of your car's exterior, interior and engine bay. - Modified Magazine