An uncommon matchup in an abandoned theme park. 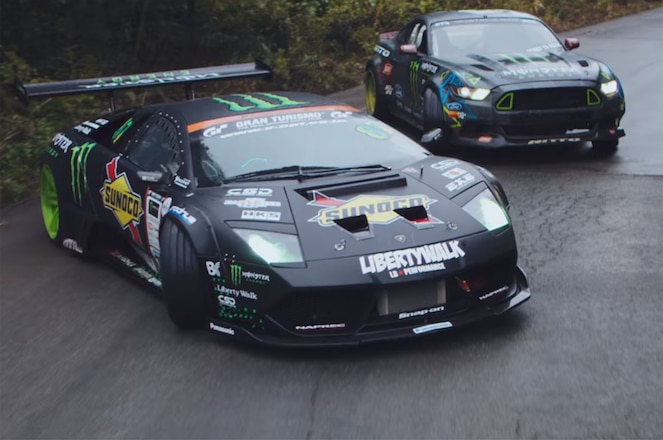 There are automotive duels you expect to see Mustang versus Camaro, BRZ versus Miata, etc. and then there are those less common matchups that you wouldn't have expected, but at the end of the day you're glad they happened. This video is an example of the Latter. In it, Vaughn Gittin Jr. squares off against fellow drifter Daigo Saito in a sideways battle through an abandoned Russian-themed village in Niigata, Japan. Gittin hops behind the wheel of his 2016 Ford Mustang RTR, while Saito pilots a Lamborghini Murcielago.

The 2016 Ford Mustang RTR is powered by a 550-hp Ford Performance 5.0-liter Aluminator V-8 crate engine, while the Lamborghini Murcielago is powered by a 650-hp 6.2-liter V-12 engine. That powerplant drives the rear wheels exclusively thanks to modifications performed by Liberty Walk and Phat Five Racing.

Gittin Jr. and Saito head out to the abandoned Niigata Russian Village for some exhibition vehicular mayhem. That venue, located in the Niigata prefecture of Japan, is a failed Russian-themed village and amusement park -e an eerily fitting place for a high-powered drift battle.

Although the battle ensues during daylight hours, the two drifters end up navigating the theme park's streets in the dark, making it harder to avoid obstacles including other cars.

Check out the video below to see the two pro drifters attack the abandoned theme park and tells us who you think put on the better show.