It's been over 24 hours since Nissan's big Z proto announcement burst onto your newsfeed and brought with it thousands of angry commenters, offended by every angle of the new sportscar. It was to be expected, as anytime a new car is introduced in the digital age it's met with disdain and angry cries (I'm using the word "cries" here, as it's fitting) to "fire the design team!" and "burn it with fire, start over!" But the reality is, this is an early prototype and the final product is still, at the very least, a year away.

In the meantime, here's a rundown of what each of the 3 Super Street Network staff members think about Nissan's latest and greatest:

Prototypes are necessarily design exercises, and the Z Proto is exactly that, but can I say it kinda misses the mark? Yeah, this meshing of old and new language feels half-baked. I can still identify basic 350Z/370Z proportions, but the dark color of the canopy makes the car's top look inordinately small. You can totally see classic Z in the roof, hood and taillights, but modernizing the throwback elements falls flat because the platform looks stubbier, whereas old Z did naturally seem pretty long and thin, especially in the nose. Additionally, that maw looks huge (maybe for an intercooler?) and the headlights dinky. It doesn't help that this thing is a neon-ish color, which is a bit distracting, but if we're being honest, we're in for the power plant - as in, how big will it be? And will it be turbocharged? We're not totally worried about the Z Proto's look (yet) because, again, this is just a concept, but if this thing is going to resonate with enthusiasts, Nissan product planners need to pick a side: old or new?

It's about time! We've been getting too used to Nissan's sixth generation Z34 since the production model 370Z broke ground at the LA Auto Show in 2008. The 370Z, while not as popular as the rawer 350Z in the aftermarket world, was a damn good-looking car with refined aesthetics, premium interior, wider body, bigger engine, better brakes and so on. Twelve years later it's a relief to hear Nissan has finally heard our cries for a seventh generation Z, but did they measure up with this prototype? I'm very inclined to say no... My biggest gripe is that this new Z Proto tries too hard to be an ode to vintage Datsun models instead of being a successor to the 370Z. The rear-end shares design cues from the 300ZX/Z32 (the taillights even look a bit S14 240SX-ish). The front grille opening is a perfectly squared off rectangle - what were they thinking there? The average body shop could've come up with that. I'm also not a fan of the Chevron-style hood, the chrome stripping between the roofline and windows and the slanted rear emblem. The positives? Well, I have no doubt the new Z is going to be a fun-to-drive, rear-wheel-drive sports car with a manual option, and if paying homage to the Z32 means there's a turbo model in the works, I'm down with that, too. Overall, this Z concept still needs a lot of TLC before a production model is even close (perhaps Nissan is sandbagging, so they don't make the concept look too good like what Toyota did with the FT-1). As of now though, I don't see this seventh-gen fairing too well with the tuning community. I had high hopes the next-gen Z might be a future candidate for the next Super Street project car. It's not out the question yet, but it's going to take a lot of imagination and modifications to make it look pleasing to the eyes.

A few weeks prior to writing up the original story for Nissan's Proto reveal, I had the images in hand and would regularly sift through them here and there. At first, I didn't like a few things, most notably the blunt, rectangular front bumper opening and the headlights that seem to float on either side of that front end. What got me to look beyond those "styling cues" that still don't sit quite right with me is the car's hood line, roof line and most importantly, it's profile.

Zoomed in from a distance, hired gun Dino Dalle Carbonare did a great a job on getting a low, long angle of the car that sold me on the design direction as a whole. Sure, the front end is vital to the look of the entire car, but this is a prototype that'll ultimately see some shuffling around over the next several months. Back to the profile - the far more sculpted rear haunches and shredded physique compared to the previous model really caught my attention and Ryan Lugo and John Sibal's renderings helped completely sell me on the vision. 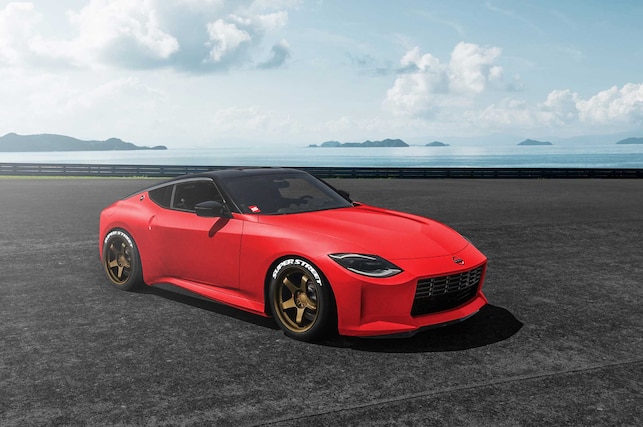 I don't hate the old-meets-new collab, but I do think oftentimes it can feel more like a cheap trick rather than paying homage. Here, I feel like Nissan did a good job taking elements from various eras and combining them into something more than just the next Z, which I assumed would be nothing more than a slightly reworked 370Z with more power. I'm excited to see how this plays out for better or for worse. Rather than complaining, we should be celebrating the fact that Japanese manufacturers are putting out sports cars once again rather than more SUVs and EVs.

Relive the entire Nissan/Datsun Z-car bloodline with some of Super Street's past feature car stories:

Weighing In on the Nissan 400Z Proto
Photo /