Does the name "TotalCreate E.PRiME" sound familiar? Chances are you are recalling our 2017 feature on the small shop's Toyota Corolla AE86 race car. Unlike the ultra-bespoke, RB-powered Nissan S13 Silvia show car we'll be discussing today, Eiji Daito's Hachiroku track machine was completely devoid of creature comforts in order to be as lightweight as possible, along with rocking a turbocharged 4A-GE that threw down 300 ponies. Despite the two vehicles being polar opposites, one thing has not changed, and that is Daito-san's belief that he was put on this planet to, "make things that do not exist." 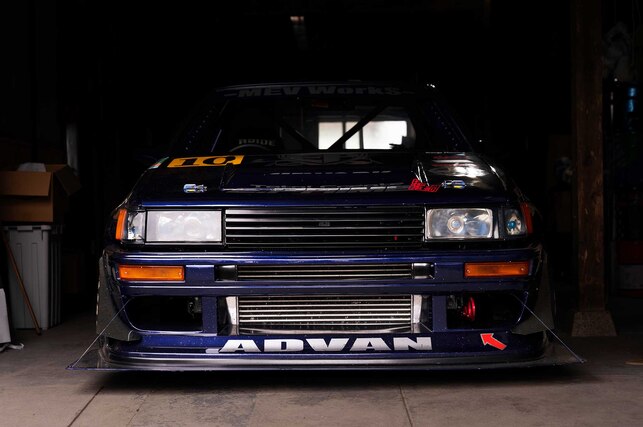 If you ever find yourself aboard a train, riding the "Geibi Line" north of Hiroshima, you'll notice that there is a brief stop at a mountain town called "Ibaraichi." Farm paraphernalia, rice paddies, scenic mountain views, fruit trees, and a rapidly aging demographic all spell the same thing: country living. But forget local produce, because for us petrolheads, one of Japan's premier fabricators is located here.

Much like our previous visit with Masataka Ikeda-san of Inazuma Worx to feature his AE86 Trueno and AE70 Corolla Sedan (who's also located in the middle of nowhere), TotalCreate E.PRiME is pretty much a one-man show. The parallels between the two men are very similar. Daito-san lives in his childhood home and he's the owner, creator, fabricator, designer, driver and spokesman for his company. During our photoshoot, his mom even came out of the house to offer us freshly sliced pears. The quintessential grandma, apron and all.

Another interesting side note is the sizable garage standing next to the avant-garde aftermarket tuner's childhood home, where everything, save for paint is, applied to E.PRiME projects. When asked for further detail, Daito-san tells us that outside of the concrete slab underneath, the entire two-story structure was constructed with his own two hands, further proving that making things is what this man does best. 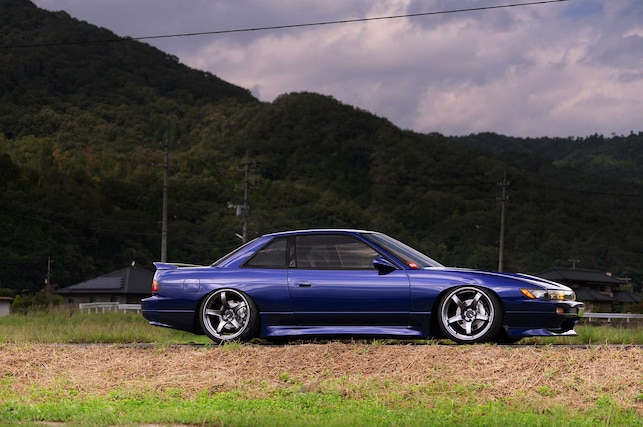 Despite remaining in the rural mountain town where he was raised, much has changed since Eiji Daito's early days. Like many kids in Japan, farm life in Ibaraichi caused a craving for a fast-paced life, and toy cars eventually gave way to teenage dreams of owning full-blown race machines. By the time Daito-san was 18, a modified AE86 was already in his possession, which he proceeded to thrash until it was time to move on to the next build. However, where many grow wearisome of the tuner life and pursue other interests, this country boy never moved away from modding, which is how TotalCreate E.PRiME was created in 2015. Specializing in all manner of fabrication, from exhaust manifolds to custom-formed, one-off fenders and everything in between, Daito-san's passion is his craft, with this car being a huge crowning jewel.

Emerging from the dark cavern of his hand-built garage, comes this S13 Silvia, a car unlike anything else E.PRiME has produced to date (and quite frankly one of the most well-executed S13s we've seen to date - SD). Daito-san's latest creation proves how well-rounded the fabricator has evolved, showing off a vehicle that focuses on form just as much as it does functionality. Something with a show vibe, yet secretly packing enough performance enhancing products to make it pretty damn quick (as we saw him rip it a couple times during our shoot - SD). 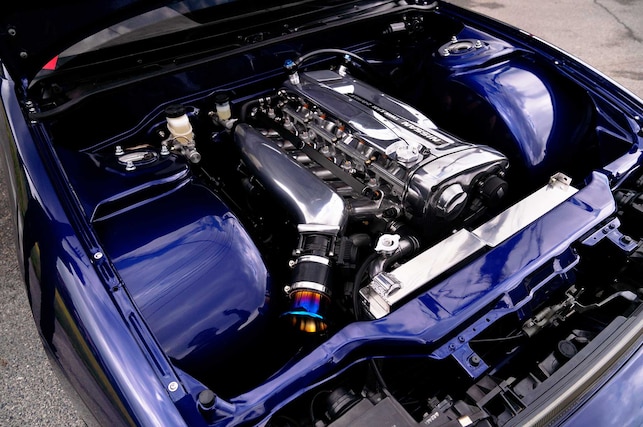 Forgoing forced induction and the factory four-cylinder, Daito-san has given this S13 a naturally aspirated RB25DE NEO swap, and stocked it full of mods. On the OEM upgrade end, you'll find an electronic throttle setup from a Z33, a fuel pump out of an R32, an RB26 valve cover, and VQ37 injectors. The aftermarket side of the show stars a shaved and polished TRUST intake manifold, SARD fuel pressure regulator, SPAL electric fan, Davies Craig electric water pump, and a one-off header and exhaust Daito-san sculpted himself. The aluminum radiator is probably this engine's biggest oddball—a custom unit from an old Mazda FD3S RX-7.

Relying upon a five-speed R32 Skyline manual transmission, the E.PRiME Silvia comes loaded with not only a NISMO flywheel and clutch, but a matching limited-slip differential and 4.7 final gear as well. A Link G4+ ECU out of a Z32 controls the engine, while a custom harness ties it all together and keeps the bay ultra-tidy.

Despite a set of 18-inch Yokohama ADVAN TC4 alloys setting things off in the style department, it's what is behind those rollers that captured our interest. Although the car's R32 Skyline brake conversion and one-off rotors are indeed pretty nifty, the suspension on this S13 is the main attraction. It's not often that you see two different kinds of damper on a car, so Daito-san's decision to run a TEIN front and A'PEXi rear setup is quite curious, even if all four are matched with RS-R springs. His reasoning? Daito-san says he liked the way TEIN's stiffest dampers rode, while the A'PEXi rears were just the right balance between comfort and control.

Hubs and knuckles also receive this same treatment, with OEM S14 parts gracing the Silvia's front, while a knuckle/hub combo out of an R32 covers the rear. Ikeya Formula tie rods and a series of fully adjustable CUSCO goods, which include tension rods, rear upper control arms and toe rods, wrap-up the suspension tour of the S13.

Body alterations are simple, and include OEM front and rear spoilers, TBO side skirts, East Bear Sports mirrors, FRP hood, and a coating of Subaru Violet Blue paint. Beauty is more than skin-deep with this one, as one glimpse of the S13's immaculately shaved and tucked engine bay is sure to emphasize.

Arguably the most unique touch bestowed upon this Silvia, everything save for the paint on the bay, was constructed and completed in-house by Daito-san. While all of that shaving, tucking, and plumbing is pretty impressive, it's those super-smooth rounded inner fender tubs that grab the most attention. Being that TotalCreate E.PRiME also fabricates motorcycle components, a split rear fender from a Harley Davidson was the trick to achieving this seamless look. 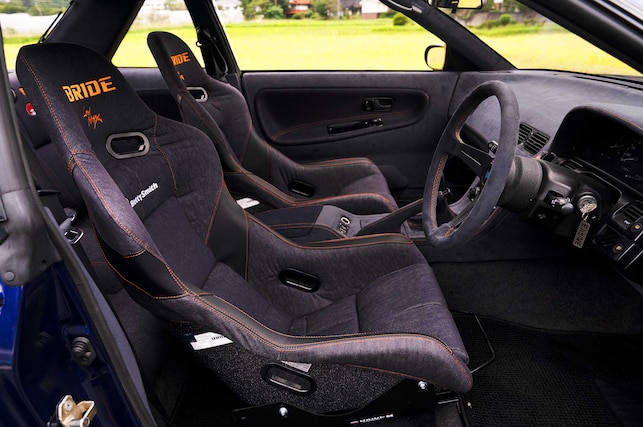 This topic of one-off exclusivity continues within the car's cabin, where a set of Betty Smith Edition Bride Low Max seats reside (Betty Smith is a famous Japanese denim brand). These ultra rare blue jean buckets made such an impression on Daito-san, that he shipped the S13's rear bench off to Bride's upholstery division in Nagoya in order to have it clad in the same material. To match this theme, the remainder of the cabin was given the Betty Smith denim treatment, courtesy of upholstery specialist 9010design.

Reupholstering the entire interior of the vehicle so that it matched the front two seats may have been time consuming and expensive, but the Z32's Link system was easily the most hair-pulling process. Adding further pressure was the fact that Daito-san had less than three months to finish the car in preparation for Wekfest Japan, which in true car show prep fashion, required quite a few sleepless nights. Finally finished, yet not street legal, Daito-san says that the car will be inspected and registered soon.

So what's next for TotalCreate E.PRiME now that the Betty Smith denim-wearing, naturally aspirated RB25-powered, tubbed and tucked Nissan Silvia S13 is complete? Rumor has it, Daito-san has a wild throwback build in the works. We'll be sure to have more on that as E.PRIME continues to "make things that do not exist."

Finding a naturally aspirated RB25 project car is few and far between. One of our top picks would have to be Paul Bischoff's 1971 Nissan "Hakosuka" Skyline featured ten years ago.

This Voltex Subaru WRX STI On Gold TE37 Is The Perfect Grassroots Example Of AWD Track-Ready Performance That Looks Good, Too
SuperStreetOnline features