Audi technician from Belgium follows his dream to finish this R32 Skyline GTS-T despite the many woes...and haters. 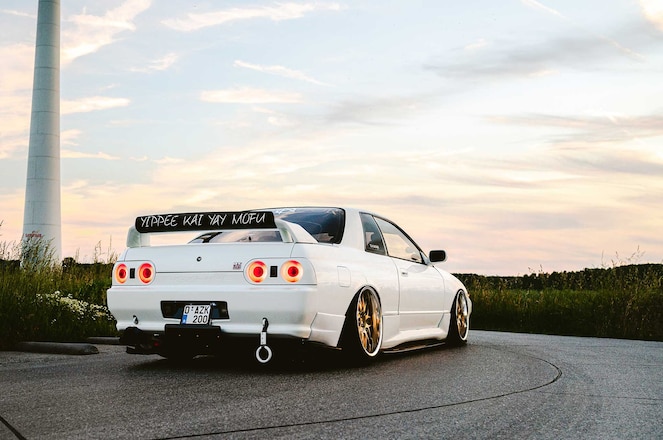 The R32 before you is a far cry from your typical Skyline; however, that's exactly what makes it so special. First of all, it's not the iconic, all-wheel-drive GT-R we've all idolized for decades, but instead a more affordable, rear-wheel-drive model known as the GTS-T. As you can probably guess, it's also not powered by the esteemed twin-turbo RB26DETT, yet it still runs a straight-six RB in the form of a boosted 2.0-liter RB20DET. To add insult to injury (especially to the purists), this R32 is dumped on air suspension.

Air ride feels a bit unusual to install on a car under the Skyline lineage, but that's exactly what owner Ken Leemans didn't care about. He was motivated to create something completely unique in his home country of Belgium, where the Euro and stance scenes reign supreme. His Skyline, while unconventional, is a breath of fresh air, which is why it caught our attention from 5,000 miles away. 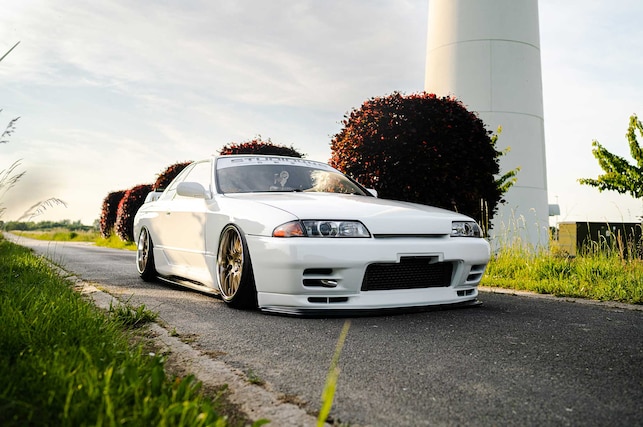 We have our Europe-based photographer Jack Howells to thank for tracking down Ken's R32 for us. Jack recently helped us discover the U.K. 's own Jay Pescaglini and his gorgeous Emerald green Nissan S14, also slammed on air.

TURN THE TV OFF

I don't know about you, but when I was growing up, I was glued to the TV, either watching cartoons and WWF wrestling or playing Super Mario. As for Ken, he was hardcore into cars since he could remember. "My father was always in the garage while my mom was inside watching TV. I didn't like TV. Cars were life. My dad and I were always busy with cars even until today, but now he's helping me instead of me helping him. Being a mechanic was in my bones." A long history of wrenching on cars at home with his dad eventually led Ken to become a full-time master technician at Audi.

WORKS FOR THE VAG BUT LOVES JDM

This was another interesting tidbit about Ken's story that didn't quite add up when I met him but made it that much cooler... He lives and breathes Audis every day. Also, being from Belgium, Volkswagens, Audis and Mercedes take up the majority of the road, which is why owning a Nissan made perfect sense! "I've always wanted something else, different than what the heard would pick. Working for Audi only made it easier for me to get a Skyline. I didn't want to be next in a row of guys with an Audi or something like that. It wasn't what my boss was expecting and being different is just what I always strived to be!"

In the beginning, being different meant getting Ken's feet wet with a few Astra Coupes as well as a Nissan 200SX. While he emphatically loved his S-chassis, the motor had its share of issues with blown seals and a cracked turbo and at that point, Ken began his pursuit of finding his next project car. "I was searching for a car like my friend's 180SX but I couldn't find what I was looking for. But during this search, the last man I visited was Nico Baelen from BN-Performance Cars. He could import me a 180 from Japan if necessary, but during our conversation we spoke about Skyline. He found this white R32 GTS-T for sale and I didn't know this could even be true for the budget I had. He said he could do it for me at a very fair price, a price that nowadays would just be enough for a rolling shell. So, I jumped into it." And the rest was history. 9 out of 10 times, we'd pick an R32 over a S13 for the same price as well, so kudos, Ken!

Have questions about importing a JDM car like the R32 Skyline? Brush up on a buyer's guide we published a few years ago. 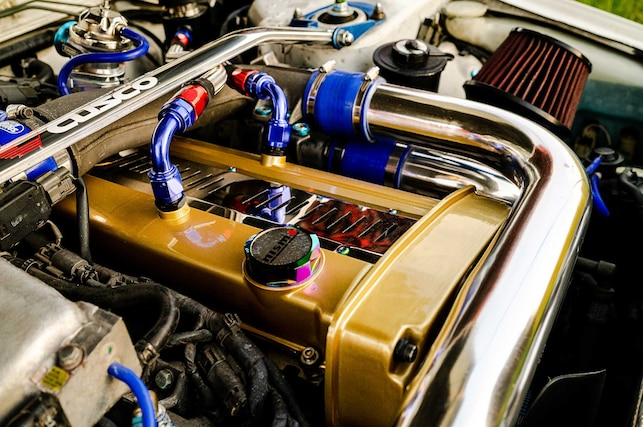 We know you're quite the expert when it comes the GT-R's RB26DETT and even its younger sibling, RB25DET... But how about the RB20? The smallest member of the RB family was introduced in 1985 as the successor to the 'ol L20. The 2.0-liter was commonly found in whips like the Laurel, Cefiro and, of course, the R32 Skyline. The particular model in Ken's Skyline is the twin-cam, turbocharged RB20DET. It makes 212hp and 195 lb-ft of torque out of the box which really shares the same output as the SR20DET. However, at the time, it was still a well-respected powertrain thanks to its 8,000RPM redline and ability to crank up boost with a bigger turbo, which as you can guess, Ken did along with an arsenal of other bolt-ons such as the Autobahn88 test pipe, Japspeed exhaust and intercooler, and GReddy blow-off valve. The end result is a reliable 314whp and 290 lb-ft of torque. "The RB20DET in my car is the engine I really wanted, the rawest of all the RBs. The RB20 is a very sophisticated engine for its time—electronic injection, coilpacks, lots of other electronics—very strong when handled with care. When this engine came out, they were still using carburetors in Europe. Personally, I would never swap to an RB26DETT. The RB20 is so sharp, smooth and great sounding - just perfect in combination with the rear-wheel-drive, at least for me."

What easily sets Ken's R32 apart from all others in this universe is the suspension set up, which was no small feat to accomplish. Taking his existing Racing Logic coilovers, he sent them to Kean Suspensions where they developed air struts using the existing suspension bodies. "I wanted to create a stance look that was also drivable for Belgium roads. That's why air was my best way out of not killing the front lip over and over again. It's honestly half show and half functional. Hate was the first thing that came out of it, and that's why I always say my car is a 'no-go bagged R32'. People always say things like, 'a true Japanese legend doesn't sit on bags'. Those are the kind of stereotypical comments I get, but this air setup isn't cheaply made like those from 15 years ago. It drives stiff and it keeps the car very much alive!"

Ken was quick to point out to me that his project car was built all at home, minus the suspension. Mostly everything was imported from Japan or made by hand with his friend Jeroen. All the aero is a mix of OEM and JDM components, but the side skirt extensions are completely custom, which he tells us didn't exist for the R32. The Fujimura Auto Rocket Dancer gurney flaps were probably the hardest parts to come by. Overall, we especially dig how everything simply comes together with the GT-R bumper and rear wing, Abflug front spoiler and Top Secret rear diffuser—a mish mash of parts but it's smooth like buttah. The gold Weds wheels aren't custom but getting them in Belgium wasn't easy. Ken had to go through a U.K. distributor and waited seven months for them to arrive.

"This is not a build made with tons of money. It's a home-built car with the money I had—nothing more, nothing less. I even had to rebuild it from a car accident. It was a hard time choosing either to keep the car or let it go 'cause it was a total financial loss with many setbacks. I lost 'friends' I never knew I could and lost a relationship I thought I had all sorted out. There was daily arguing with family, but I kept my head up. This car helped me learn a lot in life, what's important and what's not, fighting for what you want, and keeping your dream alive." 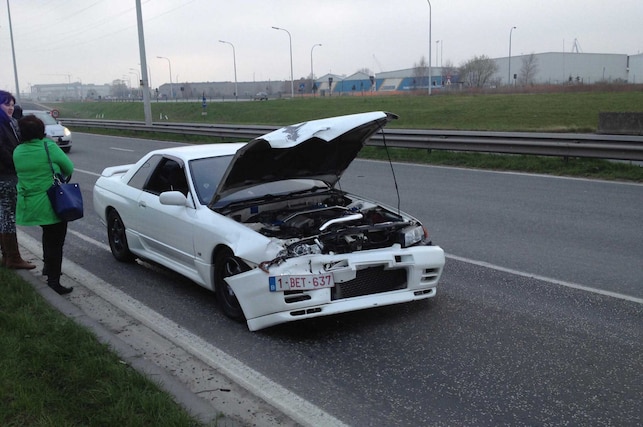