Builds like this EG6 have the ability to save lives. And no, we're not talking seat belts or crash ratings here

This 1992 Honda Civic SiR falls into an interesting category of the used car market. Cars like these are sometimes blasted for being overpriced, overhyped, all too common, impractical, ugly... the hate sprayed toward retro Civic builds is pretty damn fierce. Yet despite all of the hate, many still find these little FWD wonders to be attractive and incredibly agile once modified. But whereas some people enjoy completely redesigning the Civic hatch, many prefer to forego rendering it unrecognizable and instead opt for a more mellow approach. Cameron Vogel's EG6 is a perfect example of what the latter of these two mindsets looks like, and it is his attention to detail and willingness to fix things himself that make his OEM+ build so special.

HEADED DOWN THE WRONG ROAD

Vogel wasn't always a car guy. Hell, back in high school he couldn't even tell you what kind of oil his Civic needed, and he honestly didn't care, for drug abuse had sent him down a perilous path. But just as things started to spiral out of control, he became hooked on something even more expensive and adrenaline rich: CARS.

A good friend had just purchased a Phoenix Yellow CTR clone, which sat on PIC selects and brand-new Axis OG wheels. All it took was one cruise in that little rascal one evening, and a feeling more sublime than any other drug on earth, had Cameron Vogel fiending for more. Blame it on the crisp, high-revving B16, the sound of the Buddy Club Spec 2 exhaust, or the way in which VTEC snapped, but Cameron Vogel became addicted that very night.

Vogel cleaned up, cut ties with toxic people, and surrounded himself with genuine friends and supportive family members as he slowly returned to being a "normal" person once more. For once in his life, he had goals, and holy shit was he driven to modify his bone stock '92 DX hatchback. Sure, there were mods made in those early days that would leave seasoned enthusiasts shaking their heads, but as tuners, most of us have been there, and know that the only way forward is to evolve. Thus, the D-series was dumped for a B18C, which was then upgraded to an H2B set up, and as the vehicle evolved, he slowly began to win awards. Despite all of these evolutionary steps and achievements, Vogel eventually grew tired of his extensive, 9-year build, and parted it out in the hopes of securing something even more meaningful. For years he had secretly daydreamed of owning an EG6, never once thinking that it would someday materialize.

CUTTING THROUGH THE RED TAPE

The realization that he actually obtained one of these coveted EGs didn't dawn on him until a friend asked for assistance in importing a 1985 Toyota Corolla Levin. Neither import enthusiast wanted to deal with the red tape and financial headache associated with using a third-party importer. So, they decided to take a stab at importing the vehicle on their own and were shocked by how easy it was to do so. After finding, bidding, winning, and shipping the car from an online auction site, the two tackled all of the necessary import papers, customs declarations, taxes, and inspection red tape. Upon seeing the ease of this process firsthand, Cameron decided it might be high time he got his SiR, a vehicle that would not be so easily obtained.

For the better part of a year, Vogel perused various auction websites, with one EG6 after another failing to make the grade. All of the potential cars that surfaced were either gutted and reinforced to fuck-all, had been compromised due to a crash, were entirely too pricey, or had been relentlessly raced around Osaka's Kanjo loop. Finding a low mileage, unmolested version wasn't the only challenge, either, because even when one would surface, Vogel says he would lose the bidding war by just a few hundred bucks. 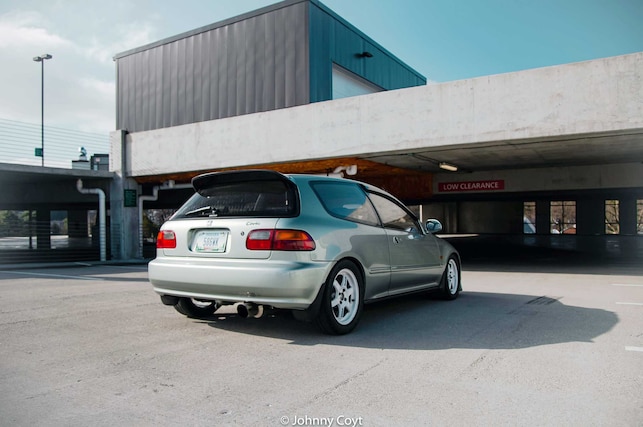 Coincidently, the Civic that Vogel did eventually purchase didn't come to him from overseas or off a bidding block, but stateside, from a seller in Clemson, South Carolina. The car ended up being a vehicle that he had bid on and failed to win just two months prior, with the winning bidder sorely disappointed in his purchase.

Upon contacting the vehicle's owner and explaining how he had always dreamed of owning a legitimate EG6, the owner agreed to let Vogel take a look at the car. Frustrated by the condition of the car's paint and all of the little dents and dings across its shell from its 30 years of existence, the winning bidder was eager to hand-off his purchase, and Vogel was more than willing to fork over some cash in exchange.

As a certified collision repair technician, all of the little cosmetic flaws were of little concern to the new owner. The car was a genuine, bone stock JDM SiR with 122,000km/77,000 miles on its odometer, and due to this fact, was in solid mechanical shape. After driving the car home and enjoying it in OEM form for a few months, he parked his new purchase and turned toward the process of procuring parts.

Even months ahead of pulling the trigger, he'd been busy sourcing and hoarding hard-to-find, discontinued OEM parts, all in anticipation of finding the right chassis. With the car safely in his clutches, and little else to do in the winter, the process of turning his hatch into the ultimate OEM+ build evolved into even more research, sourcing and hoarding. 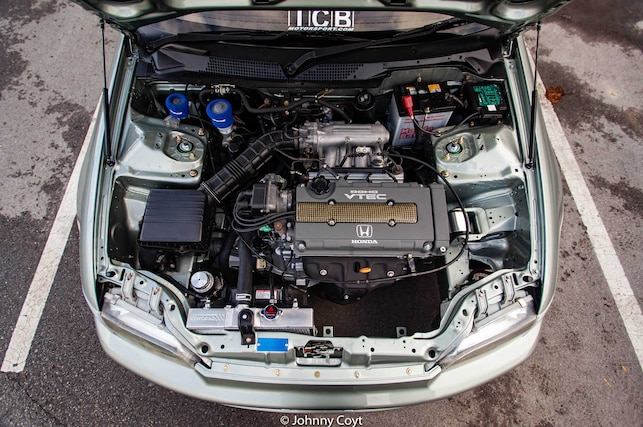 During the span of the next year, Vogel managed to find every single decal, molding, garnish, rubber component, clip, and obscure OEM knick-knack that he needed for the project. Being that most of these items were discontinued, Cameron had to spend much of his free time cross-referencing part numbers on different search engines, with Japan's "Yahoo Auctions" yielding the greatest results. His goal was simple: replace every small part of the car regardless as to whether it needed it or not.

Alone, in his cramped two-car garage, he stripped the car down to its bare bones and rebuilt it with brand-new OEM replacement parts. As luck would have it, the body wasn't in nearly as bad of shape as the car's previous owner had implied. Sure, there were a few dings here and there, and the clear coat had delaminated significantly beneath the Okinawan sun, but outside of that, it was the picture of perfect health.

Nearing the end of this paint preparation process, Cameron made the last-minute decision to conduct a full color change in order to further personalize the car to his liking. Opting for a hue that would evoke strong emotions every time he looked at it, Cameron said goodbye to the faded Granada Black Pearl paint, and replaced it with Toyota's Light Green Mica.

While it may be a mild shade of green, this color would complement the gold zinc-plated factory hardware spread throughout the chassis beautifully, something that Cameron is proud to point out. He has every right to be proud too. The man has replaced every single bolt and fastener with the freshly plated hardware—a process that few people undertake. 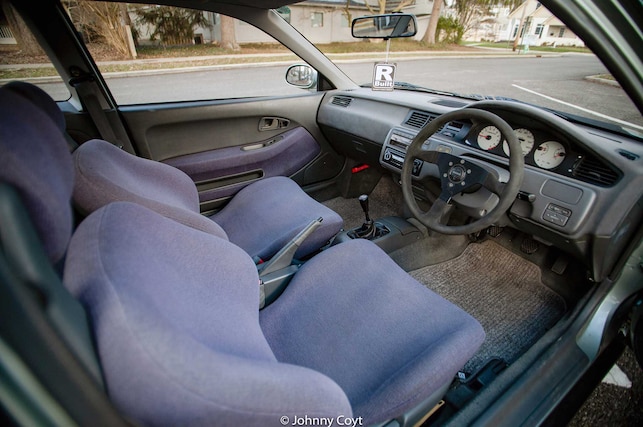 Restorations and aesthetics acknowledged, we turn toward performance perks which, much like the rest of this little EG, are OEM+ by design. While the engine and trans feature brand-new factory replacement parts aplenty but very few aftermarket enhancements, it's the suspension/handling department that's received the most love. These include a set of Fortune Auto Gen 7 500-Series dampers complete with Swift springs, Hardrace bushings all around and J's Racing front upper control arms. There are also brand-new OEM bearings, hubs, tie rods, rebuilt brake calipers, and brake lines throughout. Meanwhile, wheels are an old school set of 15x6.5" Volk TE37 in original Championship White.

OEM+ restomod complete, Vogel looks forward to driving and enjoying his Civic as much as possible. Being that he held onto his last build for 9 long years, we get the feeling he'll keep this green machine around for at least just as long. Now we just wait and see what he plans on doing with the car once he feels some more mods are needed. 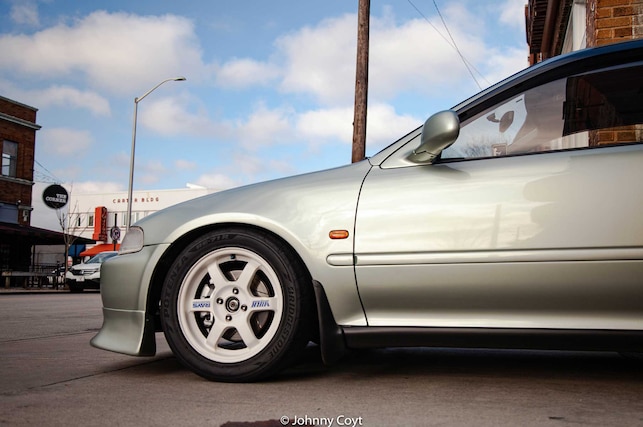 The first car Cameron ever worked on as a collision repair technician was a Light Green Mica 2007 Toyota Avalon, which was owned by a very talkative older woman. The grannie eventually became a repeat customer, talking Cameron's ear off during visits and leaving cash tips here and there. With each visit, Cameron slowly fell a little more in love with this light shade of green.

But by the time he obtained his EG6 and was ready to send it off to paint, Cameron learned that the grannie had passed away. He made a last minute decision to paint his hatchback the same color as her 2007 Avalon, because it felt like the right thing to do. Some may cringe at the thought of conducting a complete color change to a legit SiR, but Cameron builds his cars around his preferences, rather than the opinion or approval of others.

Honda Tuning
2021 Acura TLX And A Return To Form With Type S Performance
With the Type S making its return in a major way with the 2021 TLX, we're hoping this is just the beginning of things to come for Honda's performance off shoot.
Rodrez – May 29, 2020

Honda Tuning
Cruisin' for a Bruisin': Driving the 1969 Toyota Corolla IS F V-8
From the outside, this looks to be a pristine vintage Corolla. But a closer look reveals so much more.
Miguel Cortina – May 28, 2020