If you've ever been in the midst of a long-term project car build like this 2000 Acura Integra GS-R sedan and felt overwhelmed, under-funded, absolutely discouraged, or what I like to refer to as "the trifecta" - a combination of all three - then the only thing worse would be two projects to multiply the effect. In the case of Todd Grant, even with more than one project in his garage, he was able to make peace and embraced the long game to work toward the finish line as money and time allowed. It might sound obvious to some, but in an age defined by getting any and all "new stuff" in hand as quickly as possible before moving on to something else, his story is one that takes a far more patient approach.

"I've never had the money to drop $20K all at once on parts or have stacks of unopened packages strewn about the garage. The process of anything that's come out of my garage is a long one," explains Todd. This is something that won't sit well with some builders that expect a project to be complete at Amazon-delivery type speeds, which might be why so many now refer to a set of wheels and a suspension drop as a "build." This Integra project actually started out as another chassis altogether. It was mildly modded and set up as a daily driver on behalf of his girlfriend at the time. After seeing some significant wear and tear, the sedan's final straw was the result of being backed into while in a parking lot. Insurance totaled the car and paid it off before Todd bought it right back for just $400, but there was more damage in store. A few mods to get it back into service wasn't a problem but the icy street that Todd pulled into on his way home one fateful evening certainly was. "I slid right into a parked car. Perfect excuse for a Japanese ITR front end." 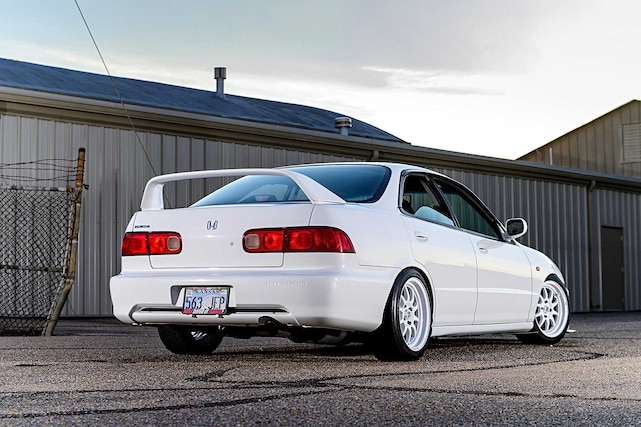 Taking a step back after installing the facelift, Todd realized investing any more time and money into the rough chassis didn't make much sense, so he decided to find a new foundation to build upon and his search ended with the GS-R you see pictured - a theft recovery shell with just 67K miles on the chassis. This is where it gets a little confusing, being that Todd had a handful of projects to contend with.

First, the newly acquired Integra's OBDII harness was in shambles - a hack job of epic proportions. "This caused me to pause, my ADHD kicked in, and I began focusing on my '96 Civic" (We'll get into that build in part two). Having purchased a TSX in the meantime as a daily driver, the new GS-R shell was pushed to the back burner and sat in his yard collecting dust while the original Integra lay silent in the garage next to the aforementioned '96 coupe, and a'94 hatchback that was a previous build. Phew. After totaling the TSX, it was time to make the GS-R project happen, so one of the Civics went to his dad's house to store and both GS-R sedans were then parked inside his garage and completely stripped down.

To those not in the know, the Integra looks like a clean and simple build, but to those that often get their hands dirty working on Acura's once-entry-level sedan, they can appreciate how tedious this project is and just how much detail went into making it happen. Todd runs down the completed to-do list like a seasoned surgeon after a major procedure.

"I installed the ITR core support on the new shell, painted the engine bay, deleted ABS using all OEM lines/prop valve, and de-pinned the ABS harness to remove the unused wires. I deep cleaned the interior sheet metal, left the sound deadening because I'm anti-road noise, organized and routed the OBD-I car harness using every wire from the donor car, and cleaned the grease off every visible connector using a small brush with brake parts cleaner, and made sure to maintain original placement of all brackets, clips, harnesses etc." Any worn suspension bushings were replaced before installing the ITR "big 4" conversion with Prelude 11.1-inch rotors and Legend dual-piston calipers up front and Accord 10.3-inch rear rotors combined with calipers from a DC5 ITR in the rear. All-white GAB Sports in 16x8 fill the refreshed wheel wells. 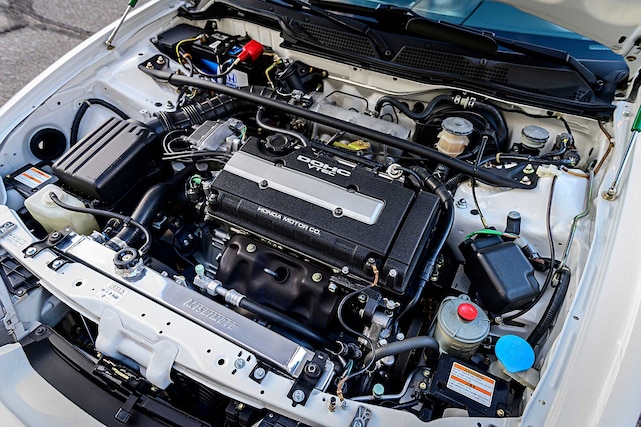 Under the hood is exactly what you'd expect to find in the form of arguably the most versatile of the B-series family. There're no power adders, no boiling high compression ratio or finicky individual throttles. Instead, an almost completely stock B18C1 that was meticulously cleaned inside and out is nestled between spotless sheet metal. Even the ITR header is covered by a factory heat shield that looks like it was just pulled off the parts counter and unwrapped. No shaved bits, nothing tucked - it's the type of engine bay that will put a smile on an enthusiast's face 10 years down the line as its classic grey and black valve cover magically harken back to those "good ol' days."

When it came to paint the car, it wasn't a simple "drop off and pick up" affair. Being 100 percent hands-on, Todd shaved the door moldings himself and also cleaned the up the body, and really only needed a hand with some paintless dent removal done by his friend Ricky after the DB8 had seen some hail damage. Todd painted the removable panels in his garage while the rest of the body and the hood he painted in a rented booth. About that trip to the booth - since most everything was pulled off of the car to paint at home, he drove the car to and from the paint booth with no doors, trunk lid, bumpers, sunroof etc. "I figured if a Jeep can do it, then so can I." 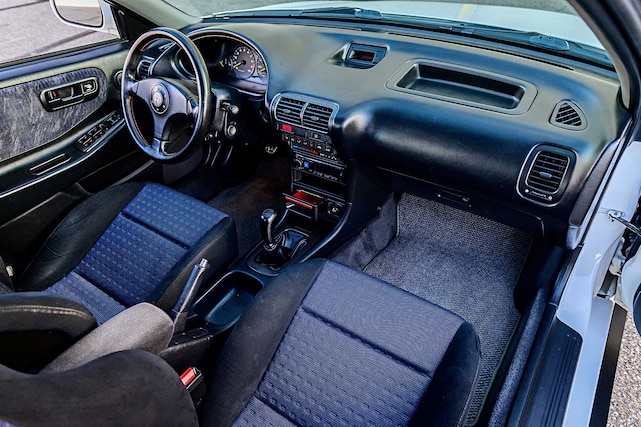 Unless he told you, you'd never know that the carpet inside this sedan was once destined to rot away in a random junkyard. A deep cleaning session combined with a fresh dash, JDM DC2 steering wheel (with custom integrated cruise control buttons), ITR switch panel trim and a pair of Recaros from an Evo 8 revitalize the 20-year-old interior and keep things as utilitarian as they are sporty, but we're confident you won't find too many DB cabins in this sort of condition.

You see more than enough wild, in-your-face, extreme builds peppering your social feeds every day. So much so, that something subtle and timeless, like Todd Grant's OEM+ GS-R sedan, which has been given a whole new life, can't help but stand out in a crowd. See it zoom by you on the street and it's just another lowered Integra but take the time to look a little closer and you have to respect the level of effort and obsessive detail that went into completing this project.