Looking to buy a limited production or one-off dream car from Japan? Phase9 may be able to help. 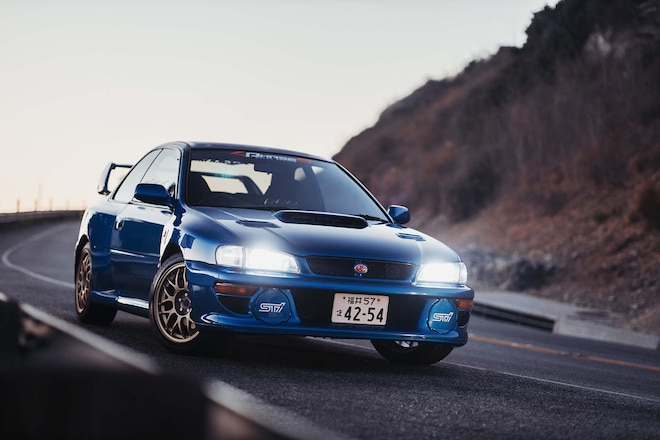 Before American enthusiasts got their taste of the rally racing-bred WRX STi in the bugeye/blob-eye/hawk-eye Impreza of the 2000s, Subaru gave us the 2.5RS a generation prior to satisfy U.S. buyers' appetites for a performance AWD. The RS went on to become a cult classic and led the way for the WRX to follow, but you know the Japanese will always have a hotter version (or in some cases, multiple hotter versions) that we never got, which is where the 22B STi enters the picture. Drawing inspiration from the extremely successful works World Rally Car GC-chassis Impreza - a platform that Subaru ran in the FIA's World Rally Championship and won the manufacturer's title with from '95 to '97 - fewer than 425 22B STi were ever produced, making it about as forbidden a JDM fruit as they come. When it comes to cars, though, we've found there's always a way to make dreams happen, provided your desire and pockets are deep enough.

If you didn't know what a 22B was, you might mistake it for a more run of the mill first gen. Impreza coupe. This one in particular, imported to America by Phase9 Motorsports out of Torrance, Calif., happens to be an exceptionally clean '98 two-door that outwardly looks like it might be modified. In fact, the flared hips and shoulders, adjustable aero and iconic rally colorway all come standard on the 22B STi.

A Subie Kind of Love 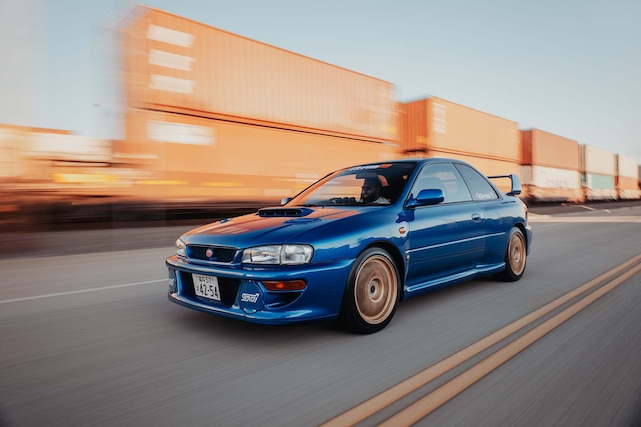 Let's start with the body and in particular the fenders we just mentioned; they add another 40mm to each side of the vehicle. The 22B STi also came outfitted in a unique aluminum hood with vents and a scoop that mimics the one found on WRC Impreza, as well as a composite front bumper cover that looks lifted from the race car. It even came with a big ol' rear wing that had a changeable angle of attack, which is still pretty unusual for a mass-produced car. Gold-colored BBS 17-inch forged aluminum wheels and a limited edition Sonic Blue Mica finish complete the old-school rally car look, in the process destroying the notion that this is just another Impreza.

What's under the hood might also appear deceiving to untrained eyes. In Impreza, Subaru's horizontally opposed EJ flat-4 workhorse is what should be motivating the car, in some variant, and the 22B STi obliges, but like the coupe's exterior, the engine and drivetrain are far from ordinary. At the core of the turbocharged power plant is an EJ22G engine block, a 2.2L iteration of the EJ similar to the 2.0L but with a closed deck and an almost 97mm bore (up from the 2.0L's 92mm bore). Subaru rated the car at 276 horsepower and 268 lbs.-ft. of torque at the wheels, but it appears to be widely believed those figures grossly undersell the 22B STi's potential. From the looks of the bay on this example, whoever owned it previously in Japan did indeed make a couple of mods, but the engine room looks largely unchanged (albeit in need of a more thorough tidying). 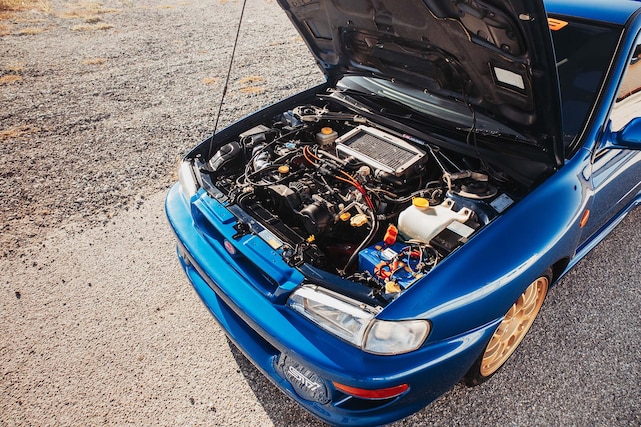 Power is handed off to a specially reinforced close-ratio 5-speed gearbox via standard twin-plate clutch, and like modern Subaru the 22B came with a driver-controlled center differential. It also features specially tuned Bilstein dampers with Eibach springs akin to the World Rally car, four-pot front/two-pot rear brake calipers, and a "Super Quick Steering Gearbox" that gave the 22B a steering gear ratio of 13:1. As far as late-'90s performance AWD platforms go, the 22B STi was built for more than your average commute.

To get something super rare and super JDM like this 22B STi that was never offered stateside, you pretty much have to go to a vehicle importer like Phase9. In fact, Phase9 are probably among the best in the biz, a family-run business founded and managed by Franz Tissera that has been importing cars for over 20 years and has offices in both the U.S. and Japan. The dealer specializes in sourcing premium pre-owned Japanese "barn finds" and importing them for sale to America, either under the Federally exempt National Highway Traffic Safety Administration's (NHTSA) so-called "25-year rule" or via the Show and Display exemption, as Phase9 did with this Subaru.

Being longtime car collectors themselves, Phase9 has built a network of strategic alliances on both sides of the Pacific to streamline the process of bringing a vehicle over as well as remove the worry from the procedure. The models they import tend to be limited production, however they also bring over a fair amount of one-off builds from the likes of Japanese shops Omori Factory, Top-Secret, Kansai Service, Auto Gallery Yokohama, and Midori. If you sense a bit of a Nissan bias, you're not wrong, as Franz himself has been a diehard fan for years and owned his share of rare Nissan machinery, among them a trio of Omori groomed Skyline GT-R (from R32 to R34). Most of Phase9's business is word of mouth and they've been able to exist as long as they have through equal parts repeat business and new customers. 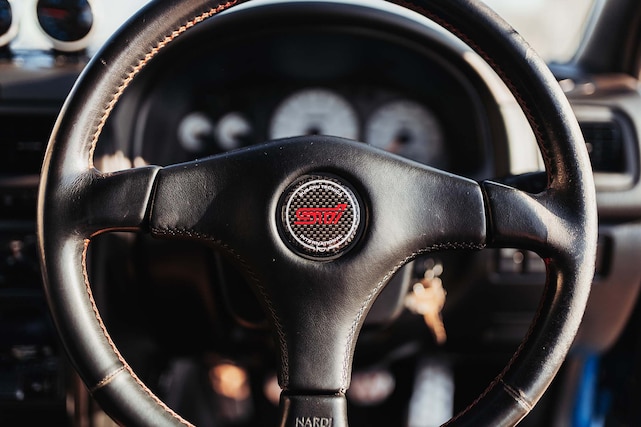 This 22B STi was imported to the U.S. earlier this year for a Lieutenant Colonel in the United States Air Force who had previously purchased NISMO 1990 Nissan Skyline R32 GT-R no. 444 through Phase9. He made the request for the 22B and within days Phase9 had found a car, procured it with their own capital, and had it ready for international shipping via enclosed container. At the same time on the U.S. side, Phase9 orchestrated the transfer with all the government agencies to make the car legit once it hit American soil, a process that generally takes a few months. To provide some piece of mind for their clientele, Phase9 make it their goal to maintain detailed records in addition to providing buyers up-to-date status reports in as real time as humanly possible during the sourcing, procuring and shipping stages.

J Cars and the Collector Market

As for how much something like a 22B STi costs, there are a couple variables to consider first. For starters, models with limited worldwide production numbers are necessarily going to command a premium for their rarity, but right now Japanese market cars in particular are seeing an uptick in perceived value, a point we've been hammering home every time we see a '90s Civic Si sell for a crazy amount of dough or an NSX nabbing a higher closing bid at auction than a Ferrari. Franz tells us prices have soared and continue to do so due to the influence in auction pricing across legendary vehicles like the R34 GT-R, Honda's NSX-R, and now, apparently, even the 22B STi. Depending on condition, Phase9 are seeing asking prices for '98 22B STi anywhere from $250k to over $500k U.S.; Franz even indicated there was another 22B in Japan currently at a dealership that wanted close to half a million bucks for the Subaru widebody coupe.

We've featured a Phase9 car before - namely an R32 that belongs to Franz's brother, Fredrick, and has gone on to be one of the most popular Skyline GT-R we've ever featured - and can speak to the excellence each one embodies. They bring in some truly remarkable rides in amazing condition, and more are on the way Franz promises, Phase9 currently working on importing both a '96 Le Mans edition R33 GT-R and a '00 R34 GT-R in Midnight Purple III, which is supposedly rarer than the Midnight Purple II. As for the new proprietor of this '98 Subaru Impreza 22B STi, they're now the owners of a little piece of JDM Subaru history, one that's worth a pretty penny and will likely continue to be that way for years to come.