It's not always about the most boost and biggest turbo for this former street racer. 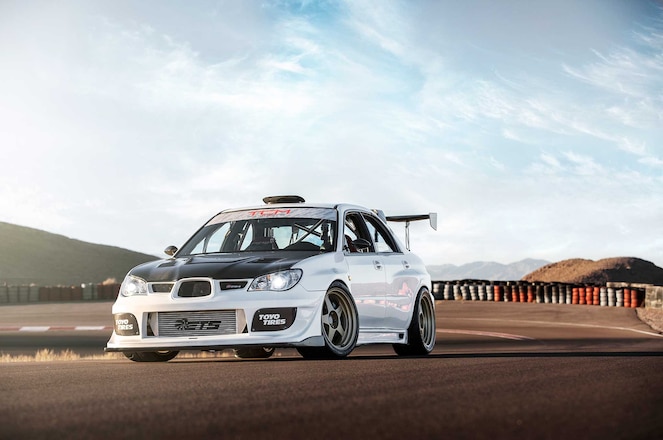 I always felt the STI is one of the more underrated Japanese performance cars of our time, especially in the States. Introduced in America in 2004, it was only offered in four-door form, a turbocharged four-cylinder (all the bigger players were six-cylinder), and in the motorsports world, it was touted for its excellence in rally, which quite frankly was about as watched as the sixth season of Jersey Shore. But on paper, the boosted Subaru sedan was a bargain and still is today; just take a look at the 2006 STI for good measure. 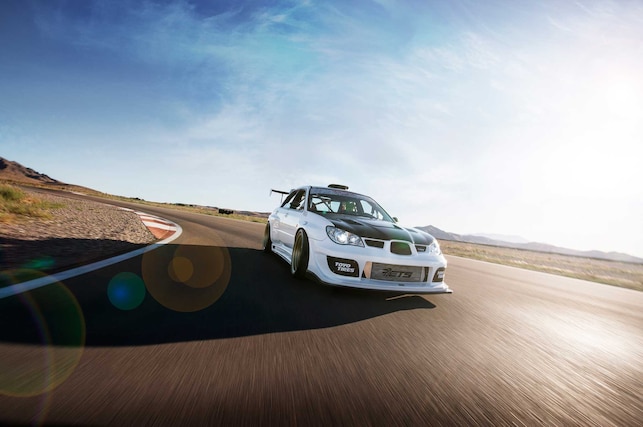 Nearly 15 years old but powered by a 300hp, 300 lb-ft 2.5-liter Boxer matched with a six-speed manual, it's still a thrill to drive with a huge catalog of tried and true aftermarket parts to get you faster and to look fly'er, which is exactly what Ronne Medina of Las Vegas has accomplished.

What I like most about the 2006 model is the newer front-end with a three-section mesh-type grille and sleeker headlight design—a nice departure from the "blob/peanut" and "bugeye" designs of previous years. Ronne kept his build more or less true to its roots, meaning it uses nothing but high quality JDM parts, but he does so in a fashion that doesn't look dated. The car looks fresh on the scene, ready to take on the track, but also has a lot of personal touches which only a trained eye will spot. During a recent visit to Las Vegas, I was able to catch up with him as well as photograph his car on the exotics racetrack at SpeedVegas. Looks quite at home on the track with nearly 100hp more than stock and tons of goodies geared toward going fast and you're likely to see his STI hitting local Vegas track days for years to come. 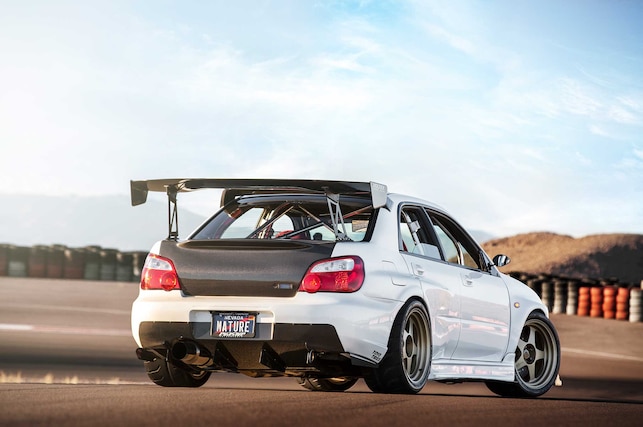 1-ON-1 INTERVIEW WITH RONNE

How'd you get into modified cars in the first place?

Cars were my gateway out of some bad habits I was getting into during my late adolescent years with drug use and getting busted from the cops. I first got into automotive building when I got my license at 16. Many "OG's" of Vegas are familiar with Thursday and Saturday night illegal races down Arville Road by the Orleans Casino, or Sunset/Valley View before the greater logistics warehouses were built. This was to test who actually backed up what they spoke of when it came to their cars. As funny and cliche it may sound, Las Vegas was like the first Fast & Furious: You gained your respect by racing some of the fastest cars in Vegas. From that point on, it led to road courses and now show car building. All fun stuff that comes with a shiny penny.

What drew you to Subaru and this particular STI?

Newer Subarus were just not my taste. I am more of a simple car guy who likes older models, rather than trying to keep up with the latest and greatest. I've always had a soft spot for the GD Chassis (2002-2007) but particularly, for the 2006/2007. From my first actual track car, the Acura RSX Type-S, I've always been into modifying halogen headlights and retrofitting projectors into them. The 2006 Subaru STi specifically was equipped with a HID projector from the factory, and as weird as it may seem, that was the reason for my liking. It wasn't an engine specification or specific year; it was the headlights that drew me into it.

Well that's definitely odd but it worked out! How long have you owned it?

In 2015, I took ownership of this car. My friend Devin had owned it for some time and I've always kept a close eye on it. Unfortunately for him, he had to move to Alaska due to a move in duty (USAF). Fortunately for me, the car became available, so things worked out perfect.

What was your overall plan for the build?

The theme is pretty simple: Japan inspired with a USDM left-hand-drive chassis. Genuine products, low (but reliable) horsepower, and enough goodies in any angle to continue and support the original products of Japan. Many older Japanese cars were my inspiration and I have a lot of older and discontinued parts from Zero/Sports, ARC and some other particulars that were collected during my ownership. 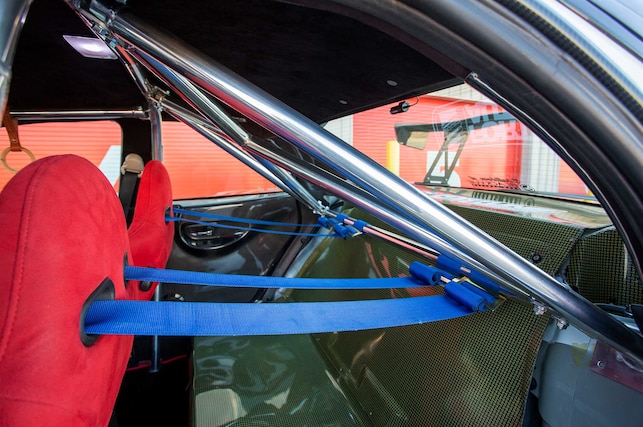 Most rare bits on the car?

Good question! I would have to say the Okuyama 11-point roll bar. Not too many know the company as Okuyama, they know it as Carbing; however, the funny story with my roll bar is that it went into its discontinued phase while my roll bar was being produced. So, it's safe to say, I have the last and final one that went to production. To my knowledge, only four of us in the world have it.

Second favorite and rare part would probably be a tie between my Prodrive rear differential cover and ARC blow-off valve. ARC did not make too many great performance products, but this was a bit special to me because it was gifted by one of my clients, who is now a really good friend. It's not your ordinary, off the shelf blow-off valve. The Prodrive rear differential cover probably isn't all that amazing to most people, but it's also kind of overlooked because of its location. My rear diffuser covers it for the most part, but the fact that I know it exists on my car is special enough to me. 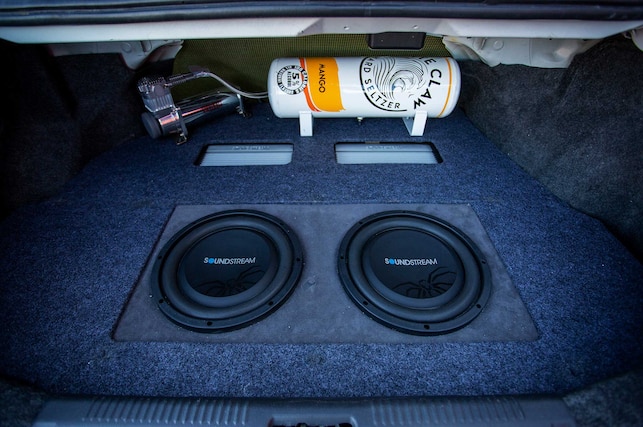 What did you feel was most challenging about building this GD-chassis Subaru?

I think the challenging context has its play in every aspect of large items on my car. From formulating the widebody to making the overall appearance of the car look "stock", was something that raised a lot of my anxiety throughout the process. James Anderson in Las Vegas put this widebody together in the most specific format I requested. Although it may have taken some time, he had completed the canvas as I imagined. Another challenging aspect was ensuring all the carbon fiber flowed together. John Panem of Detailed by Panem helped me compass the wave patterns properly in the many carbon products. Lastly, the trunk was built by my 14-year-old son and I. I'm somewhat familiar with audio and wiring in general but creating an entire trunk setup with little to no knowledge, we managed to get it done together. Jeferson, my son did research on how false floors work, found different rigid and lightweight wood options, figured out how to give enough room for my sub-box to fit, and basically came up with the entire formula, all within a couple days. Your average 14-year-old is probably researching how to be the best at Fortnite or Call of Duty. He was staring at that trunk until it was complete.

We see a lot of U.S.-built STIs with larger turbos? Reason for keeping yours stock?

It's a JDM-inspired build. Most of the cars I used to read back in Option magazine only produced about 400 horsepower. They were about building an overall car, not just the engine. Frankly, if I invested some of my money into the engine as I did with the overall aspect, I don't think I would have made my personal masterpiece. I speak to a lot of guys who are engine builders and "go-fast" enthusiasts, and to them, it's always changing turbos and wanting more, blowing the motor and starting all over. For me, it's changing wheels and wanting a different look every six months, and I'm at that age where I just want to enjoy the ride, have an okay amount of power when I need it, and master its current state. Maybe later down the road I'll chase some higher numbers but I'll continue to enjoy myself right here. 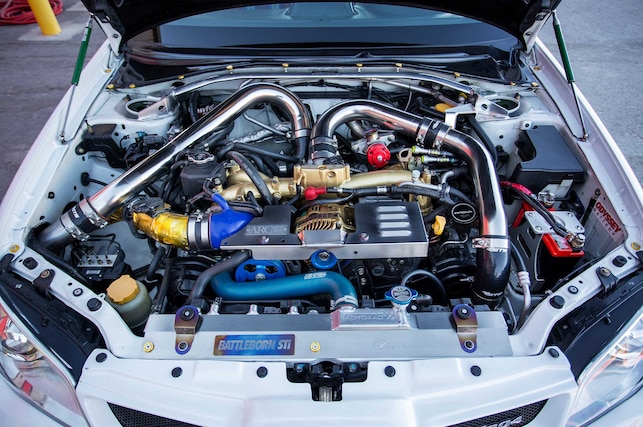 So, the drivability must be pretty good?

Honestly, it's great! As I've mentioned earlier that ARC never really made great performance products and I sort of had a hiccup at the track where we did the shoot—the O-ring on the ARC blow-off valve caused a leak. Other than that, I've driven spirited here and there and plan to seek some seat time on some road courses. I've taken it to our local track twice, and it's safe to say, I'm craving more.

Well it's a relief to see something other than TE37s. Reasoning behind the Regamasters?

When you think Regamasters, you think Honda. I'm a Honda guy at heart. But another reasoning behind that was because it's a collector's item. I just have a soft spot for parts you can't find on any ordinary e-commerce website. The specific specs I have were the widest made and one of the rarest to find. So, when my mentor and business partner Lou Bautista told me that we had a set in Japan waiting for me to claim it, I didn't hesitate.

You're one of the only Subie guys I've seen with L'aunsport aero. What was special about them to you?

Eita Suzuki, son of L'aunsport owner has been a great friend to me. They are one of the only authorized companies to produce genuine replica World Rally Championship widebodies in the world. When I say replica, I mean a 1:1 of the genuine WRC products, and they're authorized to do so. They are not your average replica knockoff company, and doing so, I still believe they are a genuine Japanese original product. Another reason why it's so special to me is because it's different. I took a rally-imaged body kit and turned it into a track-themed street car. Most of the time you'll see a WRC body kit on a car that is about to dive into gravel or dirt. When you see my car, you see a more stock-looking 2006 Subaru STi, but take a closer look and it's much wider. 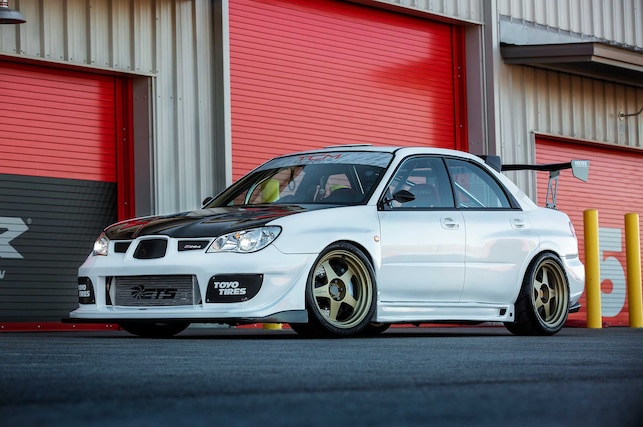 What's the next step for you, Ronne?

I have a few more things from L'aunsport that I want to put on the car before I can move on to the next phase. At the moment, my next big goal is more seat time on the track, but we'll see how the state of racing events are after this pandemic has passed. Also, as my son keeps bugging me to teach him how to drive stick shift, I think it's best he gets some seat time in this car as well. After all, he put some hours into its current state and I think he deserves a few adrenaline rushes behind the wheel. 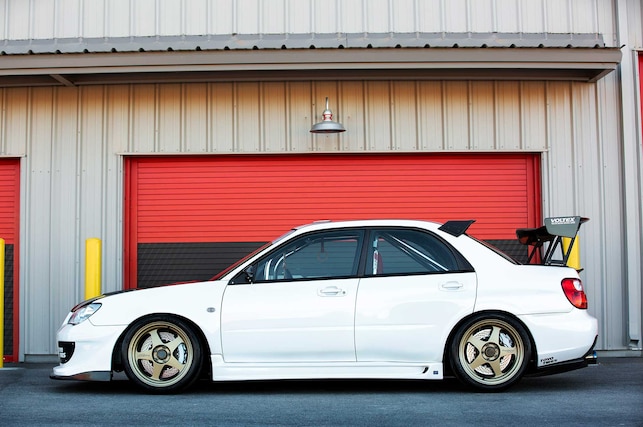 MORE FEATURES TO CHECK OUT