How do you top a Ferrari V-8-powered Toyota 86? How about swapping a screamier Judd Le Mans V-10 into a Mk5 Supra? 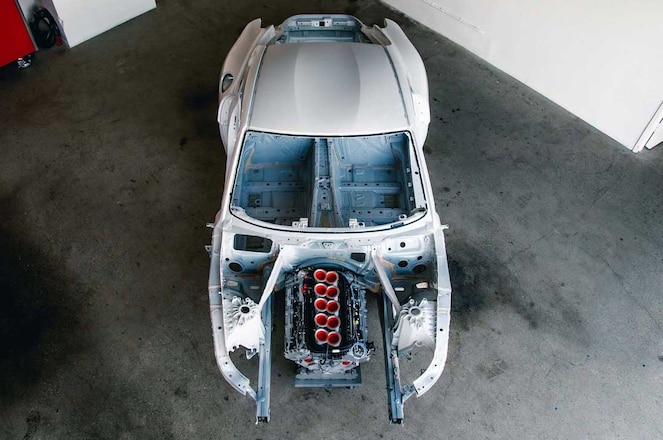 The idea of swapping an exotic engine into a street car is nothing new for professional driver and video personality Ryan Tuerck. One of his claims to fame is the so-called "GT4586," an extremely rowdy widebody Toyota 86 that received a 4.5-liter Ferrari F136 V-8 engine swap back in 2016. Content emerged, the internet got hyped on it, and Ryan became a rock star for both coming up with the concept and driving the piss out of the car in videos and demos. That entire experience seemed like a once-in-a-lifetime opportunity, but it looks like Tuerck is at it again with an even crazier build coming up in the weeks ahead, this time pairing a V-10 racing engine with the latest variant of Toyota's iconic sportscar: the A90 GR Supra.

Tuerck has dubbed the project "Formula Supra," and in the debut video for the YouTube series he characterizes the endeavor as a "dream come true." The mill is a Judd GV4 power unit, which is a 4.0L naturally aspirated engine used most recently in select Le Mans prototypes over the last couple of decades. In Le Mans-spec, the engine spins to 11k rpm and makes about 750 horsepower; it's also fairly small, compact and lightweight, weighing only about 320 pounds. It appears as though Ryan and his crew are going to try to mount the engine as low as possible in the car for a low center of gravity and hopefully improved balance and stability; in fact, weight is going to be one of the main goals of the project, Tuerck indicating be wants to lop some 900 lbs. from the 3,400-lb. Mk5, which seems like a really tall order.

Once complete, the car will apparently live life as another demo steed for Ryan to drift, time attack and hill climb. He hopes to take some of the lessons he learned from the GT4586 and apply them to this new build, and while there were very few details disclosed in Episode 1 about what's going into the car, he did mention a custom Inconel header was one of the things on the way. The debut video was basically a little background on the project and engine and a tease of what's coming next.

Do yourself a favor—YouTube "Judd V10 sound" and watch a few of the videos that come back; the engine is a legit screamer, and its note at full song reminds us of the insane video a few months back of David Mazzei's 4-rotor FD3S RX-7 sounding like an F1 car on the dyno. We're ready to see where Ryan's project goes and pretty confident it's going to come out tits. Episodes of the Formula Supra build series drop every other Sunday on his YouTube channel, so expect a new update to hit November 1st.