Home  |  Features  |  2013 Scion FR-S: Don't Forget About The Toyota 86/Subaru BRZ As This Builder Evolves His Project Car Into A 400hp Turbocharged Track Toy
Subscribe to the Free

It's hard to believe the Scion FR-S and Subaru BRZ hit the scene eight years ago. Rear-wheel-drive, relatively light (about 2,800 lbs) and powered by a 200hp, 151lb-ft Subaru-engineered, 2.0-liter four-cylinder Boxer engine known as the FA20—the two-door coupe was respected around the world by driving enthusiasts from 16 to 60 years-old. Of course, today, the original FR-S is old news with Toyota introducing a 255hp four-cylinder Supra that's set to hit dealerships later this year, as well as rumors of a 260hp 2.4-liter turbocharged Toyota 86 and Subaru BRZ to replace the existing models.

However, that doesn't mean the 86/BRZ/FR-S community is dead by many means. With used car prices dipping below $10K for these vehicles, we're bound to see more enthusiasts getting their hands on them as well and more interesting project cars coming out of the woodwork. Franchel "Frnch" Villanueva of Southern California is one such man who isn't about to let the original FR-S be forgotten, which is why we're ecstatic to share his titanium-dressed and turbocharged creation.

If you're familiar with the FR-S/BRZ/86, then you should know its true spirit stems from the Toyota Corolla AE86, also known as the "Hachiroku". Affordable, rear-wheel-drive and truly something sporty that handles well, all but begging for canyon 'n touge-style roads. The FR-S and AE86 didn't have a whole lotta power as both were equipped with a naturally aspirated four bangers, but they had the right driving dynamics to make 'em fun to throw into a corner. Frnch understood this all too well, and while he didn't get the chance to own one of Toyota's older Hachirokus, he did get his feet wet with a similar Japanese car in Nissan's 240SX. The S13 was his first-ever project car at 15 years old and he'd often wrench together with his dad. His '91 coupe was also a four-cylinder (2.4-liter KA24DE) with a five-speed manual transmission. The car served every purpose Frnch asked of it —street, show and drift. "The FR-S reminded me of my previous build. That chapter closed and I took a five-year hiatus from the scene, but now, the build of my 240 goes on to be lived through my FR-S." 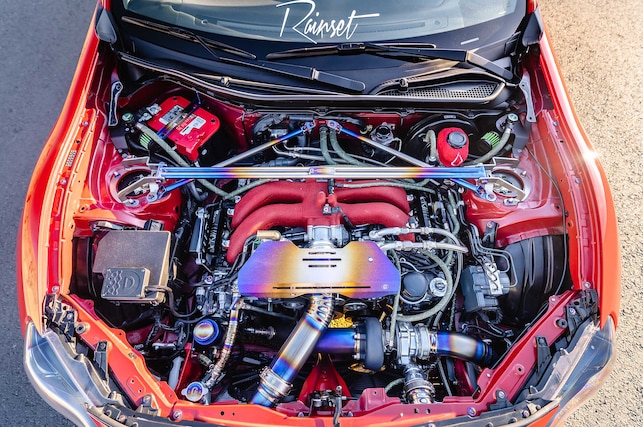 Like a Nissan 240, a Scion FR-S can be tailored to whatever the hell it is you want it to be. You can make it a dope daily driver, widebody and slam it into a show car, or beef up the power and chassis to serve as a drift toy or time attack contender. Better yet... why not all of the above? "I started autocrossing it, then TRD Cup time attack, and then Slide Factory drift clinics, all with the stock engine setup to get a better understanding of the FR-S. Now, I would like to have a mixture of time attack and drifting—where I get the most adrenaline and enjoyment from the car."

NO WIDEBODY, NO PROBLEM

Frnch started off with the basics like wheels and suspension. The 18x9.5" Work Emotion CR wheels were picked up before he even took possession of the car in 2013. He continued to upgrade the chassis with things like Project Mu brake pads, Whiteline sway bar and Stance control arms and coilovers which feature stiffer 8K spring rates all around. And unlike many highly modified 86/BRZ builds over the years, you won't find any riveted-on fenders or big wings here; just subtle exterior additions from brands like HT Autos and FIVE:AD. "I kept the body stock form and just added a lip kit. Widebodies became too common. The interior and exterior are pretty close to OEM. It's not until you pop the hood open...then it looks like Christmas."

Having an FR-S project car of our own, we know exactly what it's like to stomp on the pedal and feel the energy from a boosted FA20. Albeit, ours is supercharged by HKS, it made 255whp on 91-octane pump gas—not enough to scare anyone at a stoplight but a much needed bump in power from the factory. As for Frnch's setup, he's running an off-the-shelf JDL turbo manifold which mates to a Garrett GT2860RS turbo, and is tuned using an EcuTek ECU and Delicious Tuning flex fuel kit and map. Several other components such as the front-mount intercooler, wastegate, blow-off valve, clutch, stronger axles and larger injectors were added to the mix for an overall combination that throws down 280whp on 91 pump, and 340whp on E85. "It still has a well-balanced powerband and it's not overdone. Too much power isn't always the best route if it's not balanced for what you built it for. And all in all, it's the best feeling when you hear that baby spool!" 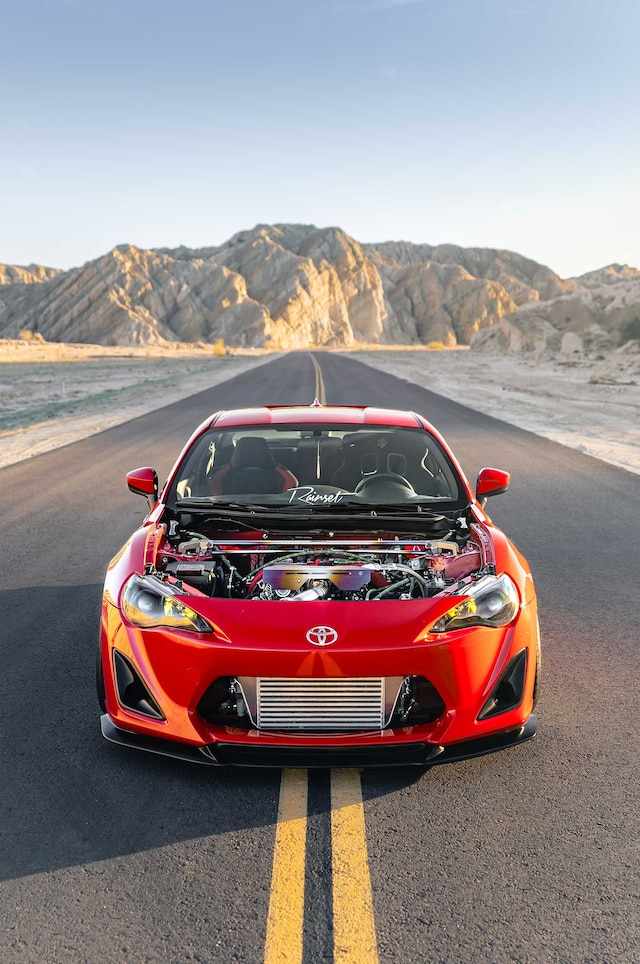 The exclamation point is in the details. Frnch could've just made his whip fast but he didn't want the engine bay to look like poo. "I noticed that titanium piping was never really done on our platform other than by JDL Auto Design. I decided to jump on a titanium setup and came across Anthony Gonzales of AMG Fuel & Design and one of his S2000 builds. I felt it was just right for the FR-S to have the ultimate aesthetic, quality, and strength of titanium, and have it executed in the best functional way." Under the hood is nothing but high-quality titanium bits now with the charge pipe, intake, radiator and radiator piping all fabricated by AMG Fuel & Design. Then Frnch added more titanium by swapping all of the nuts 'n bolts, radiator cap, coolant overflow pulley cover and hood prop for Chasing JS pieces. The final touch was hoses with quick-disconnect clamps from XRP—quality stuff you'd normally only see on high level racecars.

Frnch mentioned to us that he wants to redo everything now that he's got it to this point and has enjoyed this stage for many years. A different lip kit is in the works, plus side mirrors, a vented hood, big brake kit and even a custom rollcage. But one thing is for sure, Frnch deserves a lot of credit in this day and age. You're looking at one of the few 2013 Scion FR-S project cars that is still taken care of by its original owner, and he's modified it to a high caliber without succumbing to popular trends, but with a boosted powertrain, tuned chassis and unique details to back it up.

2013 Scion FR-S: Don't Forget About The Toyota 86/Subaru BRZ As This Builder Evolves His Project Car Into A 400hp Turbocharged Track Toy
Photo /

VIEW SLIDESHOW
1 - 9 OF
2013 Scion FR-S: Don't Forget About The Toyota 86/Subaru BRZ As This Builder Evolves His Project Car Into A 400hp Turbocharged Track Toy