Turbocharged IS300 Reveals The Science Of Speed, Stopping, Suspension, And Style 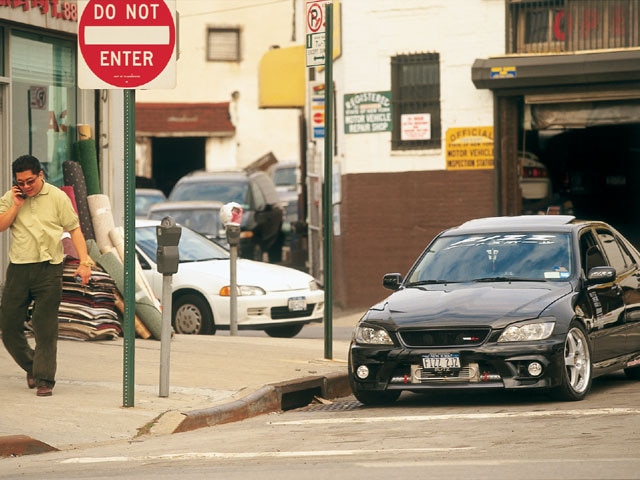 There's a dirty little secret behind this monster IS300. It's nothing as bad as Editor Nads' private collection of Dixie Chicks autographs, but not too long ago, owner Charles Park actually held the pink slip to a '90 Ford Mustang. Don't worry, there is a happy ending to this horror story. It was during this time with the Mustang that Charles really honed his philosophy of fixing up cars into what he now calls "The Complete Package." When I spoke with him before the photo shoot, he recited the breakdown of this goal like a tongue twister: speed, stop, suspension, and style. And it was obvious from the outset that he couldn't achieve this goal with the wobbly domestic.

"I got speed with the Mustang, but I couldn't get stop because the thing was so damn nose-heavy," Charles explains. "I was having problems with stopping, suspension, and this and that. And I got tired of just drag racing the car. The ideal car for me is a complete car that's not just fast, but something that I'd be able to take to a quarter-mile track and get respect, and then hop the same car over-without changing tires, nothing-to a road race course and just go all-out."

When Charles got his domestic-stained hands on the Lexus, he immediately went to work maxing out his philosophy. In terms of style, he wanted to keep everything JDM. As any card-carrying Super Streeter knows, going strictly JDM is as cash-heavy as a bad week in Vegas, and Charles estimates that he's dropped more than $50,000 into the car-not including discounts and the parts he's received from sponsors. But he wasn't going let anything get between him and his goal of addressing every aspect of the car's performance and styling. Has he succeeded in building the complete package? You be the judge.

The Supremo Engine Tuners At SwiftRacing Technologies (SRT) in Maryland get the credit for the insane boost work. They dropped in a custom-spec Turbonetics T62-1 turbocharger with a T-304 stainless steel turbo manifold, and an assortment of custom mandrel-bent piping. There are two Blitz blow-off valves, severely tuned to be noticed, along with a wide Spearco intercooler core. The entire turbo setup fills the engine bay like Anna Nicole in a Wonderbra, and the full effect is even scarier. On SRT's chassis dyno, the IS300 has put out max power and torque ratings of 503.3 hp at 5,750 rpm and 472.1 lb-ft @ 5,250 rpm without nitrous. On the bottle, the car has reached 561 hp and change.

With that much raw, molten, mouthwatering force steaming underneath the carbon-fiber hood, SRT was worried that the factory automatic tranny would bend and melt inside Charles' IS300, so the tuners built a custom automatic race transmission to handle the strain. They pulled the entire transmission, blueprinted it, and then beefed up the internals. They also added a triple-plate racing torque converter with Kevlar clutch plates. "The SRT race tranny shifts harder and a lot quicker, so it's more responsive," Charles says of the results. "And most importantly, it holds all the horsepower. I don't have to worry about my tranny breaking. I mean, I can just floor that thing and not worry about it."

Stop And SuspensionFor a guy with a 500hp car, it's surprising how much Charles talks about his brakes, which is usually a clear sign to back up and slowly walk away. But then I took a good look at the StopTech setup and wept with joy, like I did at the end of Juwanna Man (Did you actually see this movie? No one else did. -PB). Charles originally wanted to stick with the JDM theme, but then he went with StopTech after discovering that the top braking cars in the Ultimate Street Car Challenge were using its products. He proceeded to fill the gaps in his tasty 18-inch Work VS wheels with 14-inch cross-drilled rotors and mighty four-piston calipers, which come within an eyelash of rubbing the delicious spokes. Sniff.

Charles, who takes the car out on the autocross and open track dates whenever he can bust out of work, has put just as much attention into the suspension. The Tein HA coilovers are a JDM version, which means they have 22 different adjustable settings (six more than what we get with the USDM versions). To stiffen the chassis, Charles reinforced the undercarriage with a jungle gym of bars and braces. Slide underneath the car and you'll find a full JDM Tanabe Sustec system, which includes front and rear sway bars, a front three-point lower chassis brace, a rear four-point lower chassis brace, and a rear upper strut tower bar. You'll also find a Tom's front lower control bar, rear control link bars (left and right traction bars), and rear lower control bar.

For grip, Charles decided to stick with what works on the racecourse, remaining loyal to Kumho's DOT-approved V700 autocross tires-and for good reason. With the way Charles rips around New York City, the tires don't keep their grip for very long, but like a reckless night in Roppongi on a car maker's expense budget, they're a lot of fun while they last.

StyleThese days, saying that your car is JDM means as much as saying you've had sex with Christina Aguilera in one of her "music" videos. But Charles' body treatment is as fresh as Daisy Dukes on Sasha Singleton. The lines are clean and simple, with all the right touches (if you know where to look), like the Toyota Neo-Custom Sports front bumper, Modellista rear bumper and side skirts (Modellista is Toyota's high-end accessory line in Japan), Griffin rear roof liner lip, black encased Altezza taillights (instead of chrome), and JDM smoked trunk lights. The stock antenna was also swapped out for a shorter JDM Altezza antenna. This is the sort of attention to detail that separates Charles' JDM ride from the rest of the wannabes. Even the VIS carbon-fiber hood was sanded, smoothed out, and covered with three layers of clear coat.

Inside, the cockpit features TRD Sports race seats with TRD brackets (Charles went with TRD Sports only after pronouncing the Bride seats too tight for his body), a full lineup of Omori gauges on the center console, Blitz SBC-ID boost controller, Power Meter, and FATT Turbo Timer, and a clean nitrous control setup in place of the stock coin holders, just left of the steering wheel. Very tasty.

Charles gets most of his JDM parts from Fizz Autosport in Queens. And 50 large ones later, Charles says he's still not done. Next up: Ugo carbon-fiber side mirrors, a six-point rollcage, a full engine buildup (including blueprinting and balancing and replacing the internals), a T-88 turbo upgrade with all the right fixings (courtesy of SRT, of course), and a custom widebody kit, which will most likely require new wheels and tires to fill out the arches.Tissues, please.