TRA Kyoto's Kei Muira And His Very Own Civic EF 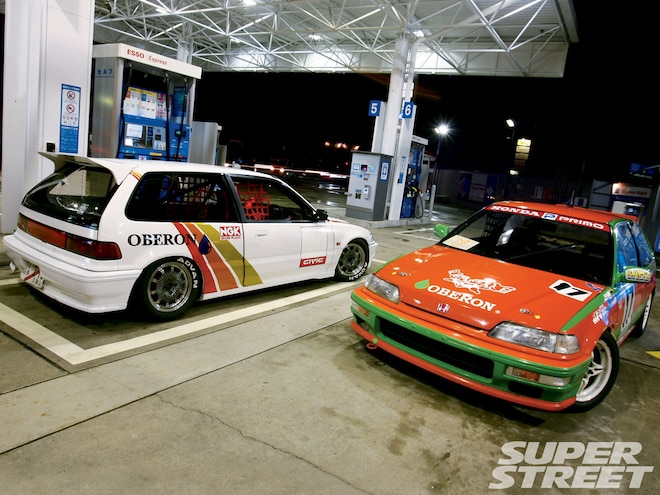 Get Off In Two Pages What is TRA Kyoto? Who is Kei Muira? TRA Kyoto (Top Resin Art) is a company based out of Kyoto, South Japan towards Osaka. Known mostly for their fiberglass work, TRA has a few other product lines - 6666 Customs, Rocket Bunny and Number 6 - that produce aero parts, wheels and a few other custom parts. Kei Muira, the owner of TRA, designs all of the aero and wheels from CAD software and machining. His CAD design skills have even landed him contract work doing fiberglass work for everything from drift kits, to VIP kits to off-road 4x4 projects. Some of the companies that get in line for his services include Supermade, D-Max, NKB, B-Spark, Schmieden, Top Rankaz and Quadruped. The first time I noticed TRA was from an ad for their wheels. They offer some of the sickest wheels for K-cars. These things look like old American wheels from the 80's and look completely gross. So wrong, it's right. That's what I love about old school wheels. They're so ugly and distinctively unique, nothing like any modern design. Unfortunately, all their wheels are made for K-cars, meaning they're small and come in four-lug only.

TRA most notably got everyone's attention when they built a couple S13s and a S14. With style and swagger no one else in Japan could do, they mixed NASCAR style wings, Goodyear tires, deep dish BBS RS mesh, wild 6666 Customs aero parts, all with gangsta low stance.

Muira is a bosozoku rider. More or less, a punk, rebel or outlaw. Bosozuku is similar to the rockabilly scene here. They dress similar and love styles of previous generations. Typically the bosozoku guys ride around making painfully loud exhaust noise with their wild bikes (like choppers but not really) or in their old '70s and '80s Japanese cars, like Nissan Cedrics and Toyota Crestas. But Muira is not from Tokyo, Kanto, or the north. He's from the south side of Japan. In the Kyoto-Kansai region the bosozoku scene has been changing into newer '80s and '90s cars. The S13s and S14 that Muira built to showoff his 6666 Customs line are a testament of the Kansai bosozoku style. Muira-san is a fan of old school race cars, drifting, the '60s, '70s, '80s and everything American of those eras. And liking American fads includes Civics, which aren't nearly as popular in Japan.

For his EF Civic build, Muira designed an all new 6666 Customs body kit like no other. A set of old 14" Mugen CF-48 rims were mounted with a set of stenciled Advan tires. And to complete that '80s look, custom gold, orange and red graphics were added. On the inside, thermal barrier tape replaces the carpet, while a rollcage replaces all passenger seating. Both sides of the car is equipped with window nets not only because they're cool and remind Muira of NASCAR, but they also have another purpose. Top speed runs on the Osaka kanjo (highway loop) are illegal. To avoid being caught, they used to wear Jason masks to cover their identity. The window nets help to cover their face relieving them of wearing the bosozuko style mask. To add to the menace, their cars don't have license plates and aren't insured or registered either. As with all TRA cars, underneath the hood, the engine bay is a dirty mess. This is all part of the Mad Max street style that Muira grasps so well.

This Civic might not be done with the same style as I would have, but TRA still remains one of my favorite companies from Japan. You just can't go wrong with white cars slammed with gangsta stance.