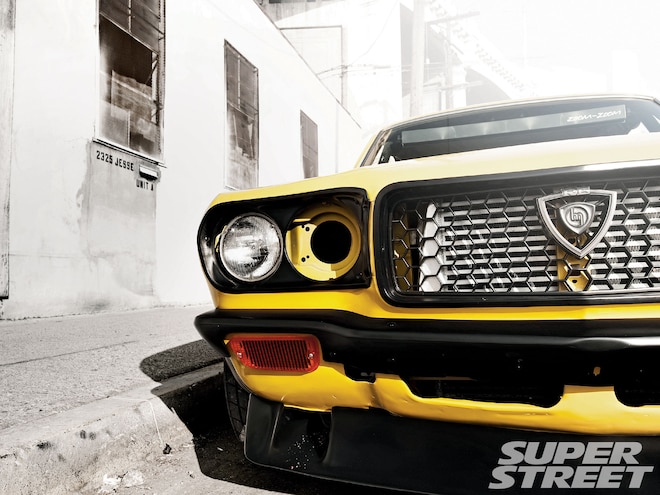 Mazda used the name RX-3 to indicate the third rotary experiment for themselves. And just like Mazda, this was, in a couple ways, Arnel's third rotary experiment. Along with a few other old school cars- an AE86 a TE27 and a 510- he's owned a total of three RX-3s. One of which being a mint virgin, one-owner RX-3 SP that he couldn't bare to modify. The SP is like the 'Type R' or 'V-Spec' for all you younger tuners. And so instead of building that one, he sold it and bought himself a KPGC10 Hakosuka ('box') Skyline. There's more to why he had to buy a Skyline, but I'll get to that in a bit.

Five years ago when Arnel found this RX-3 it was a non-running retired ITA racecar. His original intention was to rebuild the rotary 12A engine, add a downdraft carb and make it a clean, street-going weekend car. But he soon realized that the 13B-REW from the fourth generation FD3S RX-7 was the only engine he wanted in his car. The swap wasn't too difficult, only requiring some other OEM parts, a 12A front cover, GSL-SE oil pan and FC3S Turbo II transmission for an almost bolt-in swap. Wiring the standalone EMS was probably the most difficult part, but that wasn't a problem for a guy who's already had experience with that on previous cars. Soon after, the car was back on the track at Willow Springs Raceway only to come home on a trailer with a blown motor. Another motor was quickly purchased and again he rebuilt it, this time with a street port. But like the title of the story and the name of the car indicates, that motor quickly blew up, too, and Arnel had to rebuild the 13B-REW and go for a third setup. With 550cc primary injectors and 1000cc secondary injectors, the new motor was only able to safely pull off 312whp. Arnel has just picked up a set of 1600cc injectors and will be heading back to the dyno at Rotary Reliability Racing, in hopes to make it to at least the 350whp mark.

Back to the Hakosuka portion of our story: in 1971, the Hakosuka Skyline dominated the racetracks in Japan, winning just about every race it entered. Almost reaching a consecutive 50 wins, it was stopped by Mazda's newly-released Savanna RX-3. Taking the win away from the Skyline at the Fuji 500, the RX-3 quickly became the Hakosuka's nemesis rival. Together the two would dominate racing in Japan, taking turns at the podium.

Being a big fan of the classic racecars Arnel knew he had to have two things in this world; one, a Hakosuka Skyline in his garage next to his RX-3, and two, huge flares on his RX-3 to resemble the battles that took place in the Japan GT races. A generous offer was made for his mint RX-3 SP and so a 1971 Skyline was soon purchased in its place. As for flares on the RX-3, no aftermarket companies offer the huge GT style flares he was looking for. Arnel knew had he had to do it himself like everything else on this project. Having no experience with fiberglass, he turned to the Hybrid Z forum where the S30 Z-car owners are known for all kinds of custom car fabrication. Soon blocks of foam were glued to the fenders and then slowly shaved into shape. Once he had it just right, fiberglass was laid on top to create the one-off pieces you now see before you.

This is not your typical old school car and Arnel is not just a random guy who built an old school car. Having done most of the work himself he's definitely earned more street cred than most. And with a plethora of old school car builds under his belt and in his garage we can't wait to see him finish his 510 and the Skyline. As for this RX-3, after the dyno and a new tune, Arnel and the car will be back home on the track again soon.

Audio nothing beats the music of a rotary engine

Thanks You Neil at Rotary Reliability Racing and his crew, the guys at RX7Club.com, my brother Nixon, Jerry and Romell, most of all thanks to my wife and kids for their support, I couldn'thave done it without them.