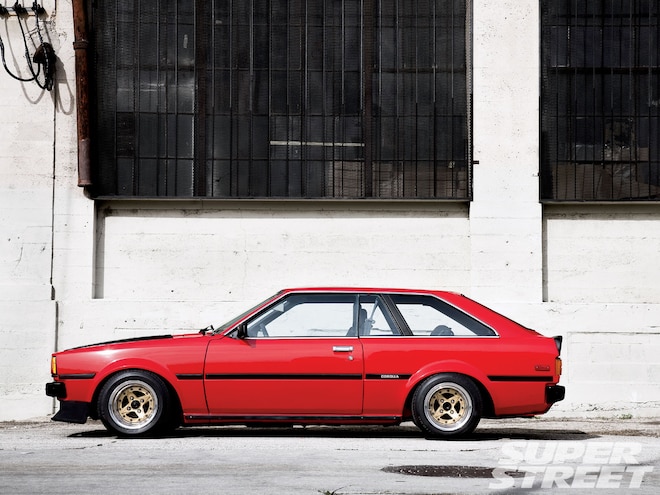 When you think of the older RWD Corollas, you automatically think about the fifth generation from '84-87, more commonly referred to as the AE86. Hands down, that is the most popular Corolla of all time. Second in line would probably be the second or third generation Corolla. It wasn't until guys like Motor Fix came around that people really started noticing the '79-84 fourth generation Corolla. And like Motor Fix (motorfix.jp), or Cesar Fernandez (see '09 September issue of Super Street), people preferred to modify the four-door sedan. The four-door sedan is just one of the eight models of the Corolla offered by Toyota. Crazy to think they offered so many variations but times were good and the Japanese auto industry was blowing up. The Corolla was offered as a four-door sedan, two-door sedan, four-door wagon, two-door wagon, hardtop, convertible, coupe (hatchback) and Liftback (hatchback) like this one before you. 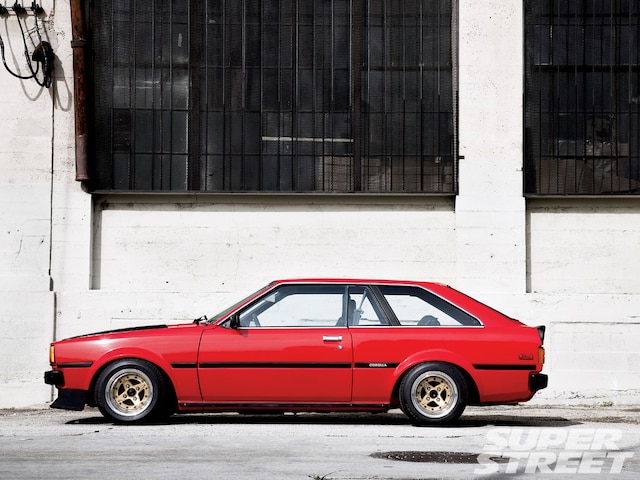 I'll admit it. I too once thought that the E70 Corolla was the ugliest generation of all Corollas, with the Liftback version being the worst of the E70 bunch. I thought the only reason anyone should build an E70 was because AE86 parts are interchangeable, while the chassis was much cheaper than the AE86. But after seeing some gnarly-ass KE70 builds I wanted more. And as more people get into older cars, I kept searching for less popular and more unique cars. The Liftback Corolla is one of those cars that you hardly see.

Mon Rivera has had several old Toyotas in the past, but two years ago he set out to build one of his best builds yet, a Liftback Corolla.

"Back in the 80's, in the Philippines, Greensville was a creekside parking lot where auto nuts met and showed off their rides," Mon tells us. "The Liftback was one of the 'it' cars. When you say 'old school ride' to Filipinos, the first cars that come to mind are the Mango Corolla, Celica, Starlet or the Liftback."

A few years back Mon met some fellow old school guys and started attending shows and meets. But the whole time he never saw a Liftback that he was satisfied with. So he decided that a Liftback was going to be his next build. Adding to that Mon says, "I grew up with the car - the body style is not that popular here stateside - and I wanted to represent the Greenhills Filipino style."

We definitely don't get to see many of these Liftbacks fixed up properly here, and even I didn't really care for them until just now. This is now probably my favorite E70 body style just after the hardtop. Mon clearly demonstrates that with older cars you've never known existed, can be really badass and unique. It's shown in a whole new light, with JDM bumpers, old school kicks and the car sitting on the floor.

Thanks You I would like to thank first and foremost my family: Jenny, Justin, Danica, Jian, Ta Z for allowing me the time, money and patience to pursue and enjoy my passion. Marvin David, Kuya Mon and Raymond de la Cruz for their endless effort, hardwork and space for the build. JD Recto and TNT Motorsports for the countless favors. Alan of Rev Hard for fabrication needs. Artesia Garage and Gamma Lubis for hard to find parts. Morro Interiors. PJ Bonifacio Auto Design. JMP Auto - Jerick, Paul, James, Rey, Bo, John, Josh and Jason. KP61.net, 3TCgarage.com, JapaneseNostalgicCars.com, Club4ag.com and OldSchoolPilipinas.org for keeping the old school alive!