The Super Street S13 Gets A Final Makeover 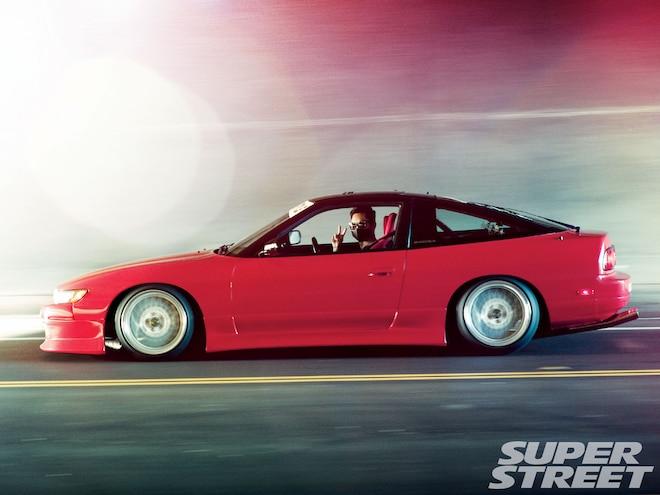 Yes, it's back again for one last update. For those who don't know or can't tell, this was originally ex-editor (part of the original SS regime) Brent Roman's 240SX. He had it years ago and swapped in the SR20DET. Without even finishing the swap, he decided to get rid of the project. From there it was sold to editor Jonathan Wong, who turned this SR20DET from a chump to a champ. 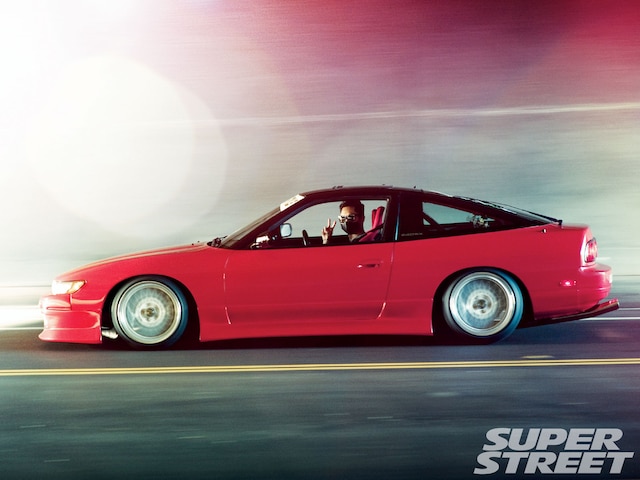 With an artillery of HKS goodies the motor was running and easily doing over 300whp. The infamous HKS GT-RS turbo now sits under the HKS stainless steel manifold. Along with the HKS turbo upgrade a huge HKS intercooler was installed behind the front end. Keeping everything under control is the F-Con V Pro. More HKS electronics come in the form of a turbo timer, boost controller and a full set of gauges. On the outside, the car was converted to a Sileighty with the Silvia front end. Finishing off the car was the aero bumper and custom red/black roof paint by MOB Works. You might remember project '2Fizzle' in back issues of Super Street, with its final feature in 2008.

After it was done, Jonathan decided to sell the car and rekindle his first love with an EF Civic. The car was sold to our company where it was used to help create a similar car for EA's Need For Speed:ProStreet. After that project the car was somewhat neglected and waiting for a revival.

When I got the car, the aero bumper, brick headlights, Corbeau seats and Volks were all gone. In replacement were the factory Silvia bumper, projector headlights, stock seats and some other 5Zigen wheels. With the HKS plethora of parts still intact, I purchased this car with the intent of scavenging the engine parts for my S14 project. I do love S13s but don't care for Sileighties or black roofs. They're trends of the past that I never really liked. But once the car was in my garage, I just couldn't tear it down. Two Super Street editors have built it up and I wasn't going to be the editor to ruin it.

Sileighties look horrible mainly because the factory bumper curves back towards the car and doesn't flow with the sloping rear. I opted for an aftermarket front bumper to extend the front end out more. Side skirts were installed to match, but the rear bumper left alone keeping the rear end thinner looking. Having this kit on made it really hard for me to choose wheels. I'm into old school kicks and parts so finding old school wheels in 18 inches was pretty hard. Instead I went for 17'' SSR Formula Mesh from VR Wheels. I've owned a few sets of these before and never get tired of them. They're probably SSR's most sold wheel, looking good on anything from the 70s to early 90s. Giving it a custom finish, I had the barrels re-polished, faces re-powdercoated and bolts gold plated. Finishing up the exterior, I picked up some brick headlights and half-amber bumper lights.

For the interior, I had to dive into my S14 parts stockpile to finish the S13's old school theme. Discontinued Bride seats, Kevlar Zeta II and Ergo, that I've had for some time now found their way into the mint S13 interior. This car also used up my first gen Nismo 330F steering wheel (with the old logo), Daikei steering hub and Bee Racing steering wheel tilt. I'll admit it, I hoard JDM parts with no real intention of using them.

Engine-wise, the car ran great when I got it and only need some cosmetic work to liven things up. Some of the cooler parts I found were the old HKS purple oil cap and spark plug cover. It sure helps to work with ex-HKS employees.

Now finished, I actually like what I considered an abomination of an S-chassis. The old fad of a Sileighty conversion and black roof works well with all the era-specific parts. Sadly, after this feature I've got to put the car up for sale to fund future projects. Building cars on a limited budget requires recycling funds from car to car. Stay tuned for more awesomeness from Super Street.

Thanks You Jonathan for the car, Sean, Bernice, Gary, Sam, Nate, Peter, Julie, Alina, Phil, Greg, Derrick, Willie, Maria and the rest of the Source Interlink crew; Harry at Nitto; Donny at Versus Motorsport; Jeff at VR Wheels; Gabriel at Evan's Auto Body; Kiyo at Carbonetic; Ray at West Covina Nissan; Andrew at Shutoko Engineering; Thena, Kendall, and Steve for always listening to my car ramblings