How Many 10 Second Supras Have You Seen That Can Also Win Shows And Be Driven Daily? 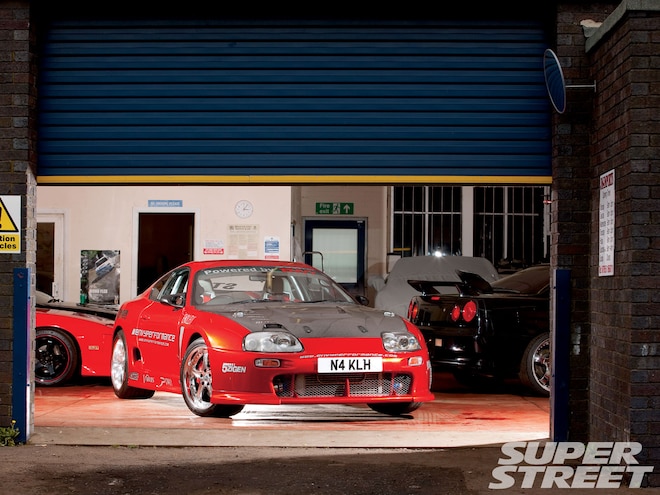 In the grand scheme of things, and without going deep into the philosophical realm, ten seconds is an infinitesimally (That's 'microscopic' in American English. - Staff) small amount of time. I guarantee that most of you won't have even got to the end of this second sentence in ten seconds, and that's only a matter of reading a paltry 54 words. 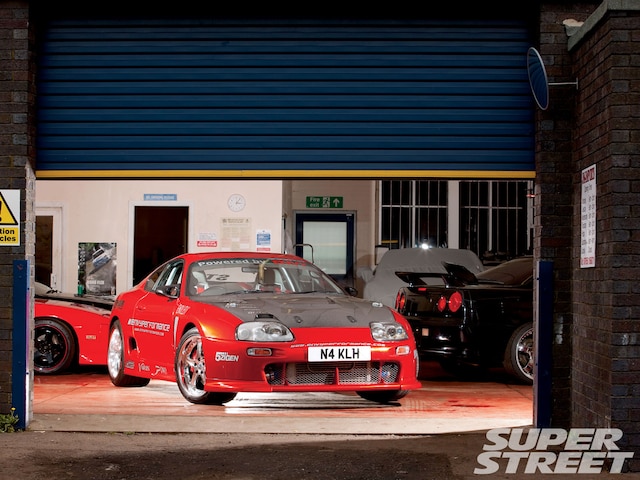 Yet in less time than this, Kevin Huntley's '96 Supra will have launched him a quarter of a mile towards the horizon and on to almost 150mph - impressive by all means. But while covering a dragstrip in 9.865 seconds, Kevin's not strapped into a wafer thin, butt-clenching carbon/Kevlar bucket, he's sat in the comfort of a sumptuously trimmed Konig leather recliner with his stereo on. Whether he can hear it is another matter as the monstrous 945hp inline-six that sits just a couple of feet in front of him spits and snarls, while the four-inch titanium pipe that sits underneath him and pokes out the back is enough to wake the dead.

"I can't describe the sensation of a full power run on the strip, you really feel the Gs pulling at your face. I have to move the seat closer to the steering wheel so I can still reach the gearstick as you get pushed back into the seat so hard - it's absolutely incredible. It's what I imagine it must be like being strapped to a rocket and launched into orbit," Kevin laughs.

But this isn't a dick-swinging contest. It's not just about who's got the biggest motor or the best kit, it's about the man behind the wheel and his reactions, too. Let's look at the process: In 9.865 seconds, Kevin will have depressed and released the heavy-duty carbon clutch seven times and snatched the Stillway sequential shifter on three occasions. He will also have added between 20-30 minute corrections to the steering to keep his 945bhp missile on the straight and narrow.

Lastly after crossing the line he will apply the A&Z/Endless brakes fully to bring his Toyota back down to sub-warp speeds before he pulls off the strip, ready for another go.

When the chunky Mk4 Supra first rolled off the production line in early 1993, it was hardly a featherweight, lithe supercar. Kevin's low mileage UK-spec example came with leather seats, air con and the upgraded stereo package, tipping the scales for the lardy GT contender at around 3,615lbs. And with all the mods counted in, Kevin's now weighs over 3,747lbs, making his astonishing strip times all the more impressive. Sure, the Envy Performance boss pays lip service to the gods of lightweight performance with a carbon-fiber hood and tailgate and a Perspex rear screen, but these are as much stylistic changes as they are weight-saving ones.

"I'm not into full-on show cars. Up until quite recently I still used the car every day and it needs to promote my company - Envy Performance - so it needs to look as good asit can, but I still think about turning it into a full-on drag car. But it's an original UK six-speed and it would tug at the heartstrings too much to strip it all apart and starting cutting metal away just to get those extra tenths," Kevin adds.

"I've had the car for 11 years and it must have cost me over £150k (approx. $234,458) in that time as it's evolved so much. I've had serious money offers from across Europe for the car and it's always been too much of a part of me to sell it, but the time has now come and I don't get to use it enough so it's up for sale.'

But here at Super Street, we admire Kevin's ethic completely. Like a swan, his Supra is swift, beautiful and graceful, but show it an ounce of disrespect and it'll have no problem stepping up to the plate to kick your ass. It will easily destroy even the most extreme of exotica - Enzo, Koenigsegg, Veryon et al - in a drag race, that Sound Performance GT45-79 hybrid turbo cramming air into the fully-built motor like a fat kid in a sweet shop. Yet it is also a surprisingly civilized road car, easily swallowing the 500-mile round trip to the mecca of European motorsport, Santa Pod.

Drawing your eyes away from the planet-sized blower, inside all that chromed spaghetti you've got CP Racing pistons, Ferrea oversize vales with titanium retainers and HKS 272° cams - the list just goes on, and on and on... Built from the ground up by Kevin and the boys at Envy you won't find a stronger, more reliable 1000bhp-plus engine anywhere. "I know that in a purpose-built drag Supra this engine will run high sevens, it's my car's weight and the manual gearbox that slow it down," Kevin points out. "In terms of Supras, I like to think UK tuners are on a par with any in the world and we're still forging forward."

This show/go dichotomy is enough to frazzle my fragile mind as his glittering House of Kolor paint job hoves into view after Kevin takes it for a quick spin round the block - it certainly doesn't look or act like a sprint tool. From the first spark of life it idled perfectly like any other factory fresh Supra, with only the tibia-level shockwaves on each blip of the throttle giving an indication of the power lurking within. When it's revved hard, your leg tendons actually twitch.

But don't be fooled into thinking this Supra is only a straight line machine either; the HKS Hipermax coilovers and TRD anti-roll bars keep it just as flat and stable through the bends, although with over 1100bhp at the flywheel Kevin admits this isn't a car you'd want to track. Even on the straights he's had a few "moments".

With that much power at his disposal, it's good to see the Envy supremo has put some serious safety measures in place to ensure that if it does all go shit-shaped that he walks away intact. "Aside from the harnesses and the 1.5-inch cage there's also a battery cut-off, a flywheel scatter shield and prop-shaft hoops to stop the car flipping if the prop snaps and digs in. You've got to remember the speeds and forces we're dealing with.

"A gearbox designer friend has done the calculations and worked out that with a four-mile straight my top speed is theoretically 240mph; that's consistent with the JUN Supra, which didn't hit 220mph on the salt flats until the three-mile mark..."

And although he mentions 240mph top speeds, the most he's seen is a verified 190mph. "I've installed higher ratio fifth and sixth gears from a later-spec gearbox, but I ran out of road on the 1.8-mile runway at Elvington at 190mph. That was on road tires. With slicks I might get more, but they aren't rated for that sort of speed so it gets pretty nervy."

So there it is: a show-winner that can destroy six-figure supercars with ease, yet is suitable to take your granny out to Sunday lunch in. Does life get any better?

Thanks you Envy Performance; Jurgen at JM Imports 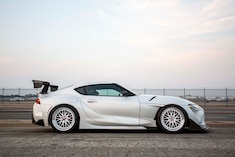