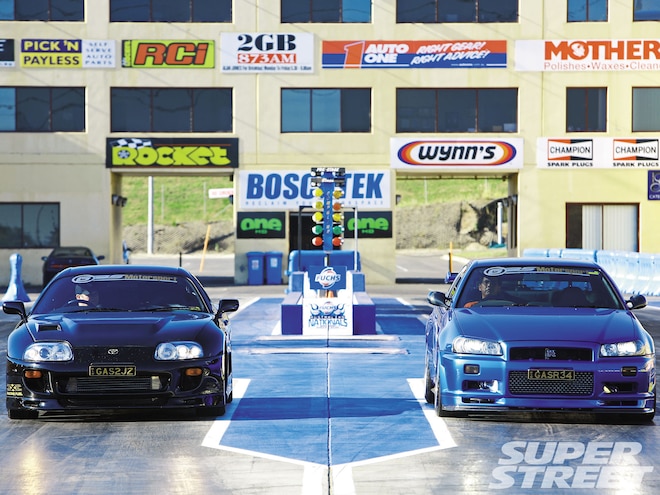 It's always nice to know when you're going to get your ass kicked. At least then there are no unwelcome surprises. When a skinny, five-foot emo beats the crap out of a linebacker, everyone freaks out - like when a Honda Civic beats a WRX. How did it happen? It shouldn't have gone down like that. These competitive anomalies aren't common, but they do happen - and it's just better to know when you're going to be on the uncomfortable end of the beating. You'd know that calling BJ Penn a bitch will finish with you bleeding, probably holding one of your testicles and crying like a little girl, so you wouldn't call the man of bare-knuckle warfare anything negative. In fact, keeping quiet and not making eye contact is probably the safer move. 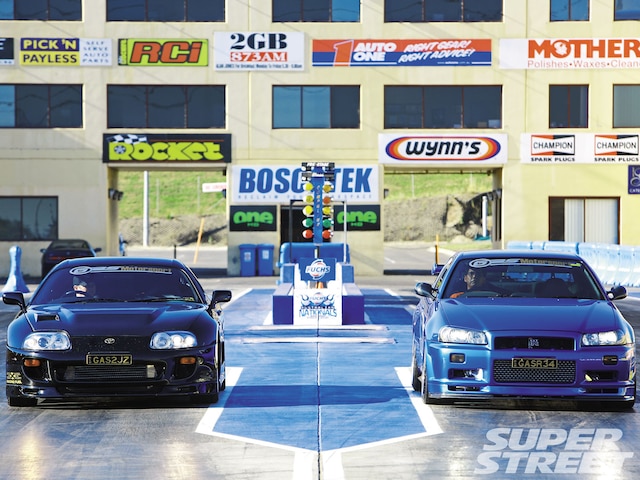 A similar rule applies when taking on either of Aussie Gary Goodman's road-legal weapons - you could wind up being beaten black and blue. This is because the Supra and Skyline you see on these pages pack an extremely powerful punch - a 2400 horsepower haymaker, to be exact. And both of Gary's toys are totally road legal.

The Skyline's the baby of the pair, with a meager 1000 horsepower, but the Supra's 2JZ is packing a jaw-breaking 1400 ponies under its long, sweeping hood. So why does Mr. Goodman have two of the jewels of the Japanese tuning world parked in his garage? Because he's one of the directors of the Australian-based Gas Motorsport, alongside rotary and import drag racing personality, Joe Signorelli.

Team Gas makes some interesting machinery for track and street, and last year when Titan Motorsports visited to race in their savage Scion at the massive annual Jamboree import show and race event, the guys at Gas showed just why they're considered at the top of their game. The Titan Legends had some big problems with the cylinder head on the Scion's 2JZ and needed to find one that could flow some serious air on the strip. Finding a head that fit the bill on a Sunday morning seemed like it was going to be an impossible task - but the one on Gary's street-legal Supra did the trick. There aren't many Supra owners that can brag that their head was fitted to the fastest drag Toyota on the planet.

But back to Gary's toys. The basic concept here is that he set out to produce extreme power from both machines, with a focus on Australia's popular dyno shootout circuit, of which the Supra is currently king. "The R34 is a better road car simply because of the suspension and AWD system," he explains, "and the handling is far superior to the Supra. But the Supra would leave it behind in a straight drag providing it got traction at the start."

So what makes these cars so damn powerful? Let's take a look:

The Supra
Of course, under the hood of the angry black Supra lies Toyota's willing 2JZ engine. With a factory crank tied to Carillo rods and JE forged pistons, the displacement remains at 3 liters. Gas Motorsport's own secret head - which must flow about as much as McLaren's F1 wind tunnel - is home to custom cams, with Ferrera valves, springs and retainers. Feeding this 2JZ is a whopping Presson 98 turbocharger with a 50mm external wastegate and a five-inch Gas-fabricated custom exhaust and muffler at one end and a fuel supply of sufficient dimensions at the other. Fuel is fed to the Hypertune 12-injector race manifold fed by a Weldon DBA fuel pump and a dozen 1600cc Indy Blue injectors. This all gets incinerated by a 16-volt MW CDI ignition with one of Haltech's wildly effective Platinum 2000 ECUs calling the shots.

This all added up to a trio of Outright Power Champion gongs at the big Auto Salon shows three years in a row - with the magic number of 1403hp at 10,430 rpm being the best rolling road run. It was running a plenum-bursting 55psi of boost from the Presson hairdryer.

Obviously, the driveline is under incredible pressure as well, so a six-speed Getrag box was enlisted to try and reign it all in. An Exedy collection takes care of transfer business, with a triple-plate clutch and flywheel with a mega heavy-duty pressure plate. A custom-made carbon-fiber driveshaft takes care of the rest, along with one of Tomei's impressive Trax 2-way diffs.

How do you stop this kind of missile? Gary and the Gas crew picked DBA 4000 slotted rotors, 324mm at the sharp end and 300mm at the rear. Gas Motorsport six pot calipers are fitted to the front, with factory two-pot rears. The car sits comfortably on G4 racing coilovers, dropped on 18-inch BBS Mesh rims, 8.5 inches wide at the front, and 10 inches at the rear coping with the 30-profile, 285-wide Pirelli P-Zero rubber.

The Skyline
Of this dynamic duo, the 2000 R34 is the "girly" option. Relatively speaking, of course - blowing 48psi it still tips the four-wheel-drive dyno at 1018hp at 9000rpm. The RB26 N1 block has been O-ringed for strength, and retains its 2.6 displacement, but now uses a billet Tomei crankshaft. The Tomei catalogue has been milked for this project - and for good, reliable reason. Tomei pistons, titanium piston rings, oil pump and head studs have all been used, as were Tomei valves and springs used in the Gas Motorsport ported and polished head with Gas' custom grind camshafts.

On the puff end, a GT55 turbo feeds a Hypertune inlet manifold with matched 90mm throttle-body via twin GReddy racing intercoolers. They've also bolted on a GFB (Go Fast Bits) 50mm external wastegate and fabricated a custom five-inch exhaust with a Kakimoto Racing titanium muffler hanging off Gas' own exhaust manifold. Like the Supra, the reliable high-volume Weldon DBA1225A fuel pump and filter have been picked, with Gas' trick fuel pick up and Hypertune fuel rail with half a dozen hard-pumping Indy Blue injectors. Again, MW CDI ignition and a Haltech Platinum 2000 ECU dictates when, and how hard, everything gets set fire to. A six-speed PPG gearbox reigns in the monstrous all-wheel-drive torque, with an Exedy twin-plate clutch, pressure plate and flywheel combo and a pair of Tomei's Trax two-way limited slip diffs.

As you can probably guess, you don't want to be facing either of these cars on the track by yourself. You'll get a nice dose of "having your ass handed to you" and then some. When it comes to Gas Motorsport, it's best to just steer clear - unless you like getting served.

Thanks you GAS Motorsport, all the staff; Joe and Danny for panel work; CCU Trimming; ON Q Installations; Haltech; GFB; Motul; MTQ; Hypertune