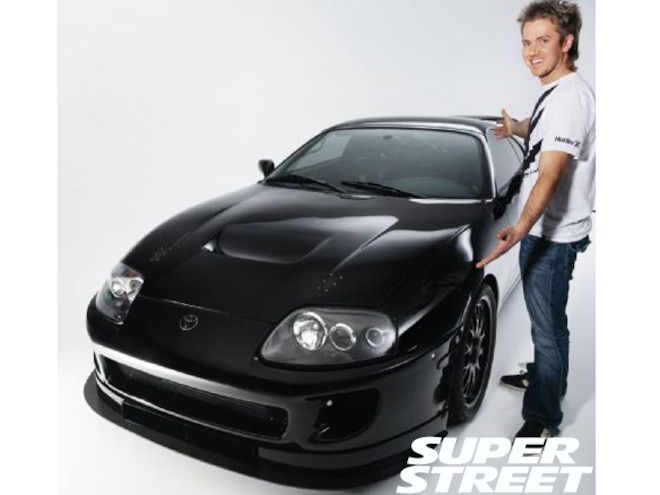 Dan Burkett’s Toyota Supra is a rather perplexing car. On one hand, it’s very similar to nearly every cover car we’ve ever featured, but in many ways it’s like no car we’ve ever seen. The seemingly effortless blend of race parts here, show quality there and subtlety everywhere else has created a very unique Supra. It’s almost as if Twins Turbo has pieced together the dream car that so many of us long for but so often get detoured from along the way.

For the most part, the body on this Supra remains stock and only a trained eye familiar with the lines of a JZA80 would be able to spot the three-quarter-inch expansions on the fender wells. In fact, even to the n00b car enthusiast the site of a Supra with what looks like nothing beyond a set of wheels, a front diffuser and a huge exhaust is nothing out of the ordinary. These days, the Supra is practically a household name thanks to everyone’s favorite movie series. Even kids too young to drive know that the 2JZ is capable of 1000hp+.

During the course of the last decade the Supra formula has typically called upon lots of chrome, huge five spoke wheels and a big honking turbo to create a totally undriveable dyno queen. While he did keep the big turbo intact, Dan decided to take a slightly different route. Instead of chrome, Dan went with black and raw metals. Instead of going with catalog parts, Dan went custom. Instead of form, Dan went with function and the styling is simply a pleasant byproduct.

So what exactly is so special about this JZA80? All the parts and labor that went into the car launch it from ho-hum to hot-damn! In the words of Twins Turbo, it is basically a full-on GT car in a stock-bodied Supra. One peek past the body panels virtually anywhere on the car reveals a plethora of custom one-off fabrication, race-only parts and pure performance. The goal was to build a timid looking Supra capable of lapping with racecars and after some two-and-a-half years the car turned those dreams into reality.

Photo 4/20   |   Instead of form, dan went with function, and the styling is simply a pleasant byproduct.

Starting in the front of the car, disconnecting the quarter-turn fasteners and removing the bumper reveals a series of intricate ductwork designed to channel air to vital areas. With past projects the Twins have learned that good ducting makes all the difference between a car that makes power and a car that is actually reliable for a sustained period of abuse. Marc KOZ Kozeluh has fabricated each duct from raw materials and they are all hung from one-off front-end framework.

In the passenger’s side vent lies a massive K&N air filter surrounded by a partially enclosed duct to prevent starvation should the main passage become blocked by debris. Opposite the air filter is the equally huge Setrab oil cooler also boxed in by sheet metal. Filling the gap in the middle is triple-row series of ducts feeding the custom Garrett intercooler, C&R radiator and heat exchanger making sure no airflow goes to waste. Making big power with a 2JZ is the easy part; keeping everything together on the track takes a lot more effort and this ducting will go a long way to ensure nothing goes boom.

Unlatch the Seibon hood and a seemingly endless sea of vast customization greets you. More of KOZ’s handy work can be seen from the custom intercooler end tanks to the hot and cold piping to Mil-spec connector junction blocks. It’s awe inspiring how much has been packed into the engine compartment and it simply wouldn’t have been possible without custom solutions. Nearly every cavity of the engine bay has been utilized in a well thought out manner to maximize the little available space.

Although most of the electronics and wiring has been well-hidden, a MoTeC E888 expansion box can be seen on the driver’s side fender allowing the car to use six EGT sensors one per cylinder. Following the custom GP Motorsports Mil-spec harness matrix into the interior things get interesting very quickly. None of the factory wiring remains anywhere on the car and with the MoTeC power distribution module the need for fuses and relays has been eliminated. Packed neatly on a custom built floor-mounted bracket behind the passenger seat resides the MoTeC M880 stand alone computer accompanied by an entourage of other modules.

These state-of-the-art electronics keep the monster engine Eric Grim Kozeluh built running like clockwork. As with the rest of the car, the attention to detail that went into the engine is astonishing. Slapping together an engine with off-the-shelf internals is something most tuning shops would do. Tearing everything apart and further customizing aftermarket parts is how Twins rolls. Grim didn’t overlook any part of the engine and further customization like DLC and Top Fuel coatings, widened bearings and expanded oil galleys are all part of the formula. The Twins even went so far as to design a five stage dry sump oiling system for this beast.

Handmade on a Brown and Miller crimp machine, Grim created all the plumbing needed for the oil and fuel systems. Residing in the trunk area is the oil sump for the system. Riding a complex system of hoses the oil makes its way through a series of bulkheads and cooling devices before being pumped through the engine and back around the circuit again. Did we mention that thanks to a C&R diverter valve this Supra could cool the oil via the Setrab cooler or a C&R water-to-oil heat exchanger, or both? It can.

Fuel follows an equally detailed maze. It all starts inside the ATL fuel cell, held in by a custom frame of its own. A Weldon unit rated for over 2000hp then pushes the petrol through a -12 custom line to two filters. Next a Weldon 2040 regulator pressurizes the gas before being fed to the HyperTune rail where it is then spewed into the combustion chamber via ID 1000cc injectors. The cost of running a system of this caliber is greater than owning a used Honda Civic and items like these are seldom seen on anything less than racecars.

In the cockpit are still more race items including a fully-functioning fire suppression system, Steen Chassis roll cage and FIA approved carbon-Kevlar Recaro Profi seats. Hooked directly into the MoTeC complex is an AiM Strada digital display. Combined these items provide a simple and reliable, albeit more expensive, alternative to numerous add-on gauges and controllers. In lieu of a radio head unit is a switch panel with 11-position dials for boost and traction control, and no this isn’t a reference to Spinal Tap, these dials actually do go to eleven.

With all of the go out of the way there was still one area that needed improving to keep the car balanced. We aren’t talking about show but rather the opposite of go, stop. Tucked away behind the black-on-black Fiske wheels are monster Brembo GT calipers in, you guessed it, black. Six piston front and four piston rear calipers squeeze down on 355mm and 345mm rotors respectively. The real magic is in the hydraulics where the Twins utilized a Tilton master cylinder unit that combines the performance of a separately mounted pedal box with the ease of use of factory hung pedals.

In a nutshell this car shares aspects of racecars and streetcars to create the ultimate sleeper blend. It’s the kind of car we all wished we owned but due to budget, the urge to look fast or simply the lack of know how, most of us have to resort to drooling over this one. But if there was ever a car to be envious of it’s this Supra. The man-hours behind the build are astronomical and everything works exactly how it’s supposed to. It’s black, it’s clean, it’s custom and it’s functional. It’s Super Street.

Thanks You I’d like to thank Toyota for building the MKIV Supra, the twins Marc and Eric @ Twins Turbo, Carlos for all his work, my wife Renee for putting up with my car obsession, my Mom for her support in my car hobbies, my Dad who just passed 2/16/2011 I wish you could see my car done. Thanks to G @ GP Motorsports and Shane Tecklenburg, Steen Chassis, Auto Explosion and anyone else that helped with the project. 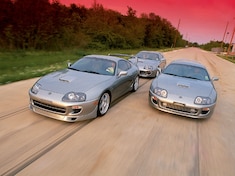