This Drag Racer Reps San Jose To The Fullest In His “Shark” Teal Showstopper. 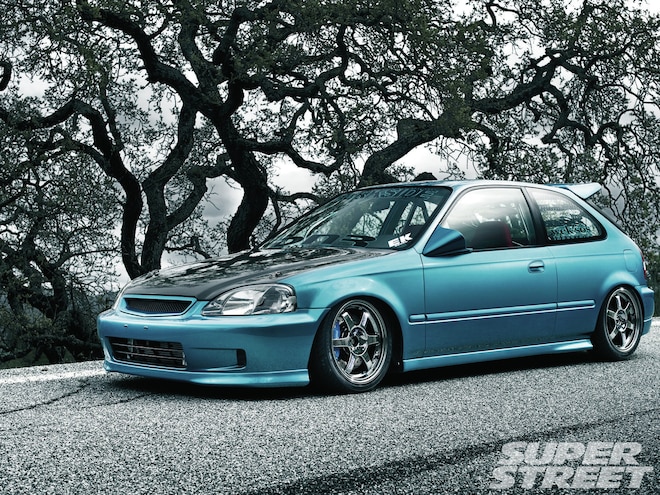 If you’ve been messing around with Hondas for any amount of time, you will have unquestionably noticed the segregation between the drag racing and show/meet car crowd. It may not be as prevalent nowadays because of the new, entirely separate “track guy” crowd. It’s all about doing time attack and full course track events now so drag racing has taken a back seat within the Honda community. With the spawning of the “track guy”, show car guys have started looking for more aggressive Japanese-inspired aero for that race car look. Drifting transitioning to the mainstream may have been the first major blow to the popularity of drag racing, but drifting just isn’t something any Honda guy has to worry about. Drag racing has always been a major part of the import tuning spectrum since the beginning and that stigma between racers and show car guys has existed alongside it. If the Honda community was high school, then these two factions would definitely be separate cliques in the lunch room and you would never catch one guy going over to the other table to share a lunch. 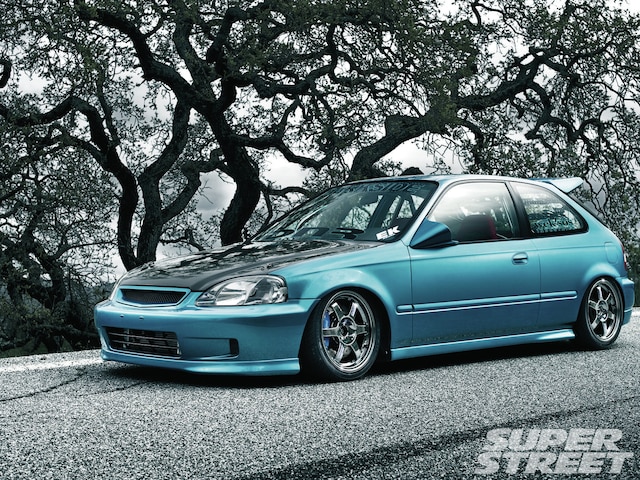 Why this issue exists is definitely debatable but as one “king” who was beat up in the ‘90s would say: “Can’t we all just get along?” It’s a little sad to see animosity between fellow enthusiasts, especially those who share a mutual love for Hondas. Drag racing has definitely dwindled in popularity throughout the last couple years, and though it may still have a dedicated following, you just don’t hear about them as much anymore. Maybe the stigma between the two parties explains why car show attendance is always so low whenever there is a show at a race event. Car shows and meets continue to be strong as ever because style is always fashionable. It’s much easier to make a vehicle look good than it is to make them go fast. Drag racers constantly have to rebuild motors or fix things that break during races, resulting in heavy monetary costs. Enthusiasts who are more into looks don’t have to worry about the same problems that drag guys do. If a show car gets damaged from regular driving, they get “street cred”. If a guy/gal drives their car more than a couple days out of the week, (or possibly even on a daily basis) they’re considered “hardcore”. Is either party right or wrong? No, definitely not. What functionality means is left in the eye of the beholder. People build cars for different reasons and this debate that has dragged-on (pun intended) persists for no good reason. If you share a love for cars then you need to worry less about how to create division amongst fellow enthusiasts.

There are some guys, like Loreto Garcia, who have been on both sides of the coin. He not only built this eye-catching show car; he’s also spent quite a bit of time drag racing. “I’ve always had this (Civic), but from ‘07-09, I spent the majority of my free time building and drag racing a CR-X. At that time, I was still daily driving my Civic 50 miles a day back and forth from my old job at a Honda dealership. Drag racing was a great experience. I ran consistent 11-second passes but soon realized that an 11.4 time slip wasn’t going to make me competitive in the ‘Street Power Class’ so I decided to move on. I wanted to try something new outside of drag racing so I began collecting parts for my Civic. Racing was fun but I felt that it was time to build a more complete project car inside and out.”

“I drew a lot of inspiration from guys like Mark Pollard, Ryan Der and Chris Sakai from ATS Garage. Their builds really showed the potential of this chassis. Another car that really inspired me was a white hatchback that used to just blow the doors off people at the local street races. I actually became pretty good friends with the owner’s brother, who turned out to be Dave Nguyen from DNR Performance. These guys made me want to build a Honda that not only looked great, but made some pretty decent power on the streets,” Loreto says. “From 2009-2010, I spent most of my time collecting parts and planning out the build.”

While searching for parts, Loreto sent out what he already had in his possession to get retouched. He sent his Safety21 cage down to SoCal where it was chromed by Dipped-Parts and for additional custom “bling”, Loreto also had his 16-inch Volk TE37s plated in a black chrome finish. Being that the body itself had seen wear and tear from every day driving, he decided to have the entire car re-sprayed. “Choosing a color was the hardest part of the build,” he explains. “I was constantly on the lookout for colors that I liked but I just couldn’t decide. This was totally random but I saw a teal Ford Escort one day and it reminded me of the San Jose Sharks hockey team. The Sharks represent my hometown and also my favorite hockey team so it was perfect. Getting the teal to resemble the colors of the Sharks was the next obstacle but I told Sunny from Franklin Autobody about my idea and he was able to match the jersey color.”

Occurring in conjunction with Loreto’s build was an intense nursing program that he was putting himself through. Not having a job and being in a program that required more than his undivided attention definitely left him with little time to work on his Civic. Parts were coming in at a reasonable rate; it was just a matter of fitting time in his schedule to get them on the car. He discovered a week long break from school in his schedule last winter, and those seven days would prove to be essential to getting “Sharkie” (he came up with that nickname on his own) closer to completion. Loreto had also set a personal goal to make his debut at the 2011 Wekfest NorCal event and there was no way he would bring the Civic out incomplete. “The deadline was coming up quick and I really didn’t want to take any shortcuts during the build and do all the important details last-minute. I was lucky enough to have a good friend in Hugo Colmenero who was there to assist me whenever I had time to work on my car. I really couldn’t have done it without him. Dave Nguyen came through big for me when I needed help with miscellaneous engine parts for my B18C1 motor. I was an unemployed nursing student so there were certain components that I just couldn’t afford brand-new without Dave’s help.”

In the span of those seven free days that he had, Loreto and his friends were actually able to reassemble most of the car. Minor details and operational responsibilities like engine tuning came in the weekends leading up to the Wekfest event. We would ask him if all that work in such a small amount of time was worthwhile, but we already know the answer. He lands on the pages of the Super Street Honda Issue this month because we spotted his bright “Shark Teal” hatchback at the San Francisco Wekfest show. Whether he’s a true drag racer or show car guy is of little consequence to us—the guy can build a hell of a Honda and that’s all that matters. 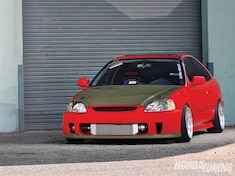 Gil wanted a family friendly car. That doesn’t mean he had to compromise. This 2000 Honda Civic LX Sedan is no librarian’s Civic. 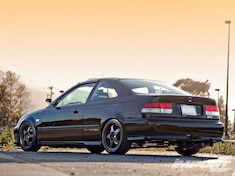 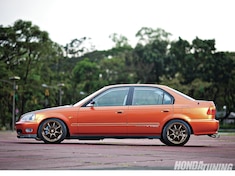 Come with us as we head to Quezon City, Philippines to check out Michael Angelo Gonzales-Lim's 2000 Honda Civic SiR Sedan. - Honda Tuning Magazine