This S15 Silvia Is So Terrifying, It’ll Have You Running For Cover 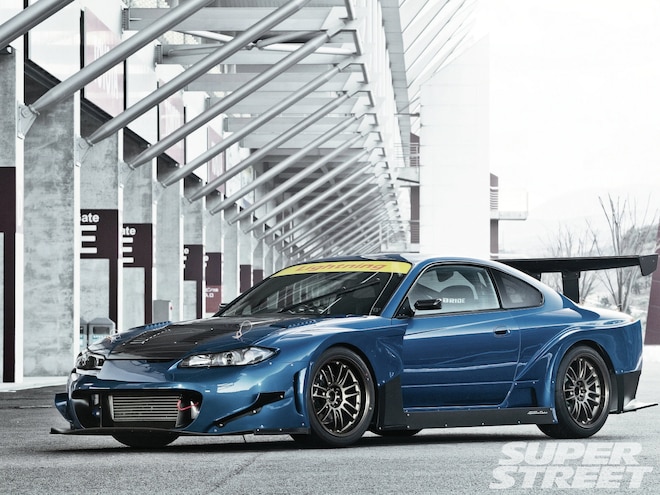 There may well be a very good chance that Jum (the owner of this very car) was at one point or another struck by a bolt of lightning. There is no other explanation for his sudden decision to transform his S15 Silvia into something nobody has ever seen before. He entrusted his car to Lightning, a shop in Fuji City, which specializes in tuning the S-chassis, so you can understand the opening play on words. Jokes aside however, this is an extremely unique project and one that grabbed the attention of the tuning world at this year’s Tokyo Auto Salon. It’s the authenticity of the whole build that makes it stand out; after all, it’s not the first time a street car has been made to resemble a race car. But as Watanabe-san of Lightning explains, it was functionality that dictated the design of the body, and the results as you see here are nothing short of complete and utter sickness. 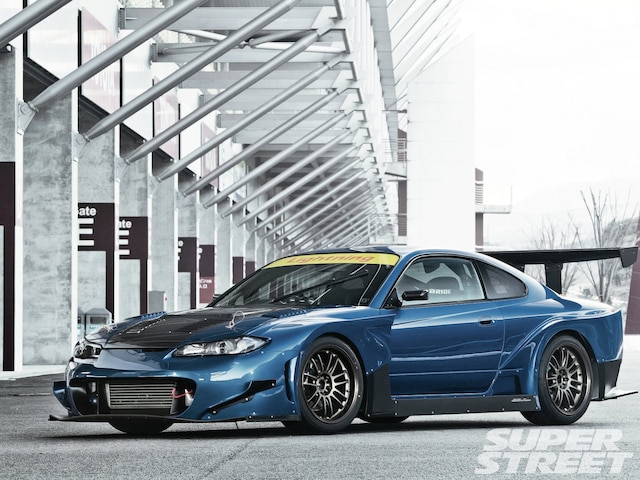 Jum has been enjoying his S15 at Fuji Speedway for years, driving the car every chance he has, perfecting his lines and times. Initially, the stock engine left plenty of room for improvement so it was there he decided to work on first. Lightning began working on the engine and as a first step, boosted power to a very adequate 430hp by bolting on a HKS GT2835 Pro turbine mounted on a high-flow Atrack exhaust manifold, which leads out to a full Kakimoto titanium exhaust system. A massive Trust intercooler was also added to cool the intake charge, which is directed via the hard piping kit towards the stock inlet plenum. To help the engine take the higher boost levels, a Tomei 1.5 mm metal head gasket was fitted as well as a necessary fuel system upgrade consisting of Tomei 740 cc/min injectors and a Tomei high-flow fuel pump. The potential for great mid-range torque delivery was taken advantage of thanks to the Tomei 270º camshafts, which, thanks to careful tuning of the Tomei Reytec ECU, allow for a very usable flat torque curve that peaks at 5,800 rpm with 398lb-ft. Transmission upgrades followed next with a Nismo 6-speed close-ratio gearbox to get the most of the performance out on track; it was also equipped with an OS Giken twin-plate clutch and a NISMO GT LSD for a driveline capable of supporting a lot more power in the future, which is precisely what Jum was looking to do before he realized that he could perfect the performance of his car in yet another way.

You see, Jum is an avid fan of Super GT races and has always been fascinated with the various cars that compete in the two different classes. What makes this race series so impressive from a technical point of view is the amazing times the cars can record even when they’re restricted on power. By using complex aerodynamics, cars competing in the GT500 and GT300 classes tend to carry more speed into corners and power out earlier, relying greatly on the downforce their carefully sculpted surfaces develop. It’s precisely this fascination that edged Jum to push the boundaries of body transformations, not with any old body kit out there but instead to find someone to develop an aero kit that would actually make proper use of the word “aero”.

Jum relies on a set of specially set-up Aragosta dampers to help the Silvia handle the turns of Fuji Speedway while, to get the most adjustability out of the geometry, Ikeya Formula pillow-ball links replace the factory arms. The factory brakes have been replaced with something from the Silvia’s older sibling, using R33 GT-R 4-pot calipers at each corner along with slotted 2-piece Project Mu discs. The race car influence is carried over to the interior, and as soon as you open the door you are met by a fully padded rollcage and a pair of Bride bucket seats. The driver side Maxis III is so heavily bolstered that even Jum, who is extremely thin, can barely wiggle his way inside! But it all adds to the racing feel and that is just the way he likes it. Behind the flat-cut Sparco P310 steering wheel the factory dash instrumentation has been removed and replaced with a Racepak IQ3, which are synced with six additional A’PEXi gauges that provide additional feedback of the engine’s vitals. A custom switch panel houses the toggle switches for the electrics and the engine start button along with the control module for the gauges, lap timer and A/F meter.

Watanabe-san called in the help of Ohashi-san at Sports Cars Co. Ltd, a designer and creator of Super GT racecars to pen and sculpt the lines of what was to become the Lightning Strikes S15 Silvia Racing Edition widebody conversion. Ohashi-san had to work within strict guidelines to allow the kit to remain road legal, so things like ride height needed to be considered for the Silvia to retain its everyday usability. Every surface and curve was created with aerodynamics in mind, from the slap-sided widened fenders, to the complex rear end and the massive wing. A dry-carbon front splitter is one of the most important parts of the conversion, even if it remains hidden underneath the car. Thanks to Venturi sculpting, this piece generates the highest amount of downforce out of every other part of the body and because of this is fixed securely to the chassis and is separate from the rest of the bumper. The bumper itself was given a more flowing shape to help the car penetrate the air, and additional downforce-enhancing canards have a pair of air outlets that help extract air from the wheel arches as well as drawing heat away from the front brakes. The carbon-fiber hood was created to shave off weight from the front end but thanks to its strategically placed louvered outlets, it can also extract heat from the engine bay without affecting front downforce.

The chiseled profile of the car is a result of fine airflow tuning, carbon slats and chunky side skirts to prevent any air from moving over the sides of the Silvia and underneath the car, creating unwanted lift. The hardest area of the body redesign is where air passes over the rear fenders and bumper surfaces; here, the widened fenders have been shaped to work together with the rear wing and channel air from inside the wheel arches outward to reduce drag. Much of the same effect was achieved with the lower section of the bumper, cut out mostly to help pass air from under the car and away from the S15’s shape without affecting drag. Of course, no aerodynamic restyling would be complete without a crazy wing and again, this is something that comes straight from the design of a Super GT racer, not a street legal project. Unlike normal GT-wings used on a lot of the cars we see, the stays aren’t fixed onto the lid but instead onto a metal subframe fabricated in the trunk. This is the only way that the high-set dry carbon wing can efficiently transfer its downforce onto the chassis. In order for this to work at all, the carbon trunk lid had to be cut to clear the center mounting points and needs to be removed carefully by two people. Not much shopping going into that trunk anymore! What impresses is the fit and finish of the whole conversion; its panel gaps are tighter than a factory S15 and each is fixed onto the chassis via race-spec quarter-turn fasteners and the attention to detail is really of the highest caliber. To complete the GT look, Craft Square carbon mirrors replace the stock foldable items and a set of bronze lightweight Volk Racing RE30s were chosen for their use in motorsports.

Jum hasn’t yet had a chance to take the S15 out on track as of press time because the car had just been completed for the Tokyo Auto Salon but out on normal roads he says he can already feel the complex aerodynamics come into play at highway speeds. It will be interesting to see how much of an impact the tremendous downforce will have on his lap times. Eventually, Watanabe-san will be fitting in a 2.2L stroker kit to get the most out of the current set-up and in the process make the engine bay more presentable. The complete Lighning Strikes Racing Edition kit will soon be on sale but it sure won’t be cheap. Alas, it’s the price to pay to be completely unique.