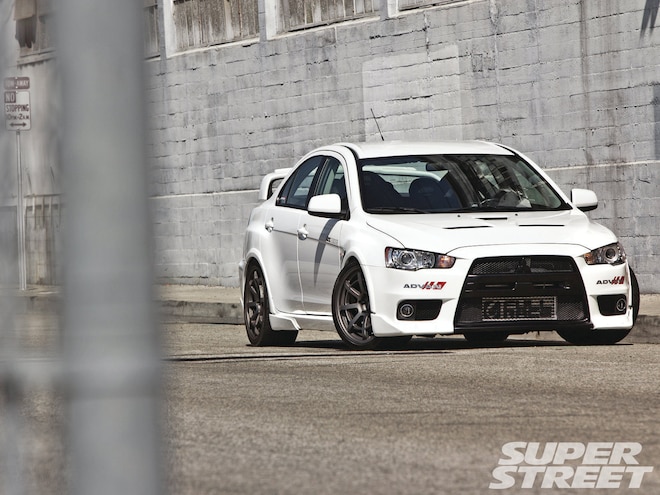 Forget the hard parkers and track junkies, this ’08 Mitsubishi Evo is for the people. It’s not stored in a garage but daily-driven, whether commuting to the office, picking up the kids from school, going on long road trips… You name it. And it does it all with some serious style and big-turbo power. 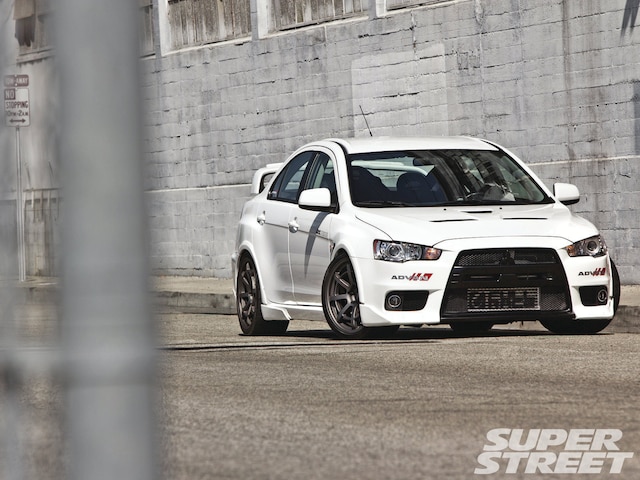 The builder of this white knight is none other than ARK Design. Established in Tokyo back in ’04, ARK also has a US division in Orange County to service its stateside customers. We were happy to work with them on our belated Project Ralliart Sportback by fitting their seats and dash display. Now they’re back in the mag with this super-clean Evo.

First things first, the exterior sports ARK’s Aero Armor. Thankfully it’s not an outlandish kit you’d see at some car show. The stage one kit is smooth and subtle, which includes a pronounced front spoiler, rear and side fins, plus a trunk spoiler and rear wing. All the polyurethane components are made in Japan ensuring a trouble-free fitment and plenty of durability.

The chassis received more ARK goodies including the one-piece R8 wheels and the larger six-piston front and four-piston rear calipers for some stopping greatness.

The catalog of ARK parts continued into the interior. The stock seats were ditched for the Road Series reclining buckets. Despite looking like a race seat, you don’t need to weigh 110 lbs like our own Sean Klingelhoefer to fit in them. A wide design makes them cozy for the big boys.

As for the dash, although relatively stock, it features ARK’s Multi Function Dash 2 (MFD-2)—basically a little OLED screen that monitors everything from RPM, oil pressure, boost, etc. There’s also an Accelerator Throttle Curve Controller (ATCC) mounted on the steering column. This modifies the throttle signal output and increases acceleration response—meaning there’s no lag when you hit the gas pedal. And finally there’s an OEM-looking turbo timer which is mounted next to the traction control switch.

With enough accessories installed, the car still needed some balls. So ARK put the project in the hands of Full-Race Motorsports. No stranger to Evos, Full-Race has been developing twin- and single- scroll turbo kits for the CT9A platform. This new prototype on ARK’s 4B11T motor uses a new tubular manifold and a BorgWarner EFR turbo—a package Full-Race has been developing for years that maintains OE drivability while still giving a big kick in power. A new front-mount intercooler and downpipe were also thrown into the mix to improve the setup. Finally, the head was upgraded with Cosworth cams to keep the valves open longer, thus taking advantage of the larger turbo at high RPMs.

With all that being said, ARK Design’s Evo is one cool cat. With not a whole lotta parts, it’ll make you look twice on the street but also have the cojones to back that ass up.