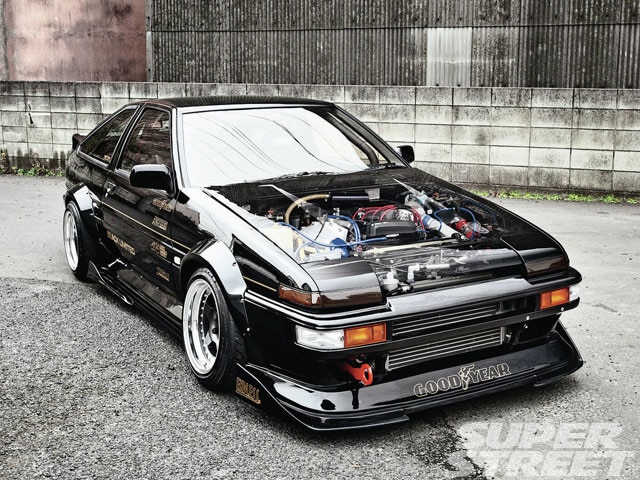 If there were one particular chassis within the Japanese tuning world worthy of a “lifetime achievement” award, it would probably be Toyota’s AE86 chassis. The Hachi-Roku has garnered worldwide critical acclaim amongst enthusiasts and nearly 30 years after the first one rolled off the production line, it’s still one of the most popular cars to modify. Many will argue that there are other chassis out there that are comparable or more iconic, but the AE86 is definitely deserving of the nod because of its easy attainability. They were never meant to be anything special. The AE86 started life as an affordable, economy coupe/hatchback with a reliable engine, nimble suspension and a rear-wheel drive layout. They were cheap and fun so they were often times the entry-level car that every car guy/gal started out with back in the day. Enthusiasts started modifying them and companies followed suit, developing parts. Fast forward to 2012 and there is a nearly endless supply of parts for these cars all over the world.

There is just something so undeniably cool about the AE86. Everybody loves an underdog story and in the import automotive world, this car is the ultimate underdog. It will never be as fast as a Skyline, but it doesn’t have to be. To be perfectly honest, the car itself is a little awkward looking, but the 80’s appeal is just one of the reasons why it stands out. The motor wasn’t designed to make a whole lot of power because it would ruin the great balance of the car. If there is anything you can say about the Corolla, is that it’s very capable of doing a lot with very little. The Hachi-Roku is a working man’s sports coupe modified by the Average Joe.

Unless you were in the know back in the day, you really gotta give drifting and/or Initial D credit for bringing more attention to the AE86. Before drifting, there was only a very select group of 86 aficionados that truly understood its potential. In Japan, however, enthusiasts have long revered the AE86 and recognize it as an icon in their automotive subculture. That’s why you see them in their video games, movies and manga (Japanese comic books). Their popularity through the years has even sparked the creation of tuning shops devoted strictly to the modification and styling of the AE86. One of the most well-known AE86 tuners in Japan is Yoshinori Kamata and his family-operated shop: TEC-ART’S. If a true 86-lover died and went to heaven, TEC-ART’S would be that heaven. They do any and everything you can think of, like aero parts, minor/major maintenance, engine-tuning, suspension, and even interior modifications—all for the AE86 Trueno or Levin.

On a recent trip to Japan, we dedicated a chunk of time after the Tokyo Auto Salon to visit Kamata-san at the TEC-ART’S facility. Throughout the years, we had grown accustomed to their two flagship projects; their bright purple N2 race car has been around for over a decade now and their D1 drifter, wearing the same bright purple livery, was one of the most recognized builds during the height of drifting’s popularity in Japan. TEC-ART’S latest endeavor is a step in a completely new direction. The current AE86 still wears the signature TEC-ART’S aero, but that’s where the similarities end. You won’t find any crazy vinyl or graphical livery on this particular AE86 because Kamata-san wants the world to know that he’s acquired quite the rare gem—this Corolla, which Toyota dubbed “Black Limited”, is one of only 400 ever produced.

If you are unfamiliar with the Black Limited, don’t sweat it. The chances of you knowing about it are slim, unless you’ve been active within the AE86 community. Though the differences between the Black Limited and the rest of the Hachi-Roku family are purely cosmetic, the chassis and parts themselves remain some of the most sought-after to this very day. Those that own authentic Black Limited parts can expect to receive high-dollar for them, and for good reason. Replicating a Black Limited isn’t all that difficult, but it can be very expensive. One out of 400 is rare as is. If you consider how many thousands upon thousands of AE86s were produced for the world market in the ‘80s, those 400 probably account for about or less than one percent. The Black Limited Corolla was also only made available in certain regions of Japan. On paper, a Black Limited isn’t all that special; it’s just a regular AE86 liftback with a gold Trueno emblem, yellow headlight bulbs, “Black Limited” decal set, orange-stitched interior and a rear taillight garnish that also bears the Black Limited name. The OEM wheels on the Black Limited also came in a gold finish but mechanically they are about the same as any other 86. It’s just the fact that knowing you own something so rare that came from the factory that makes owning a Black Limited so interesting. No matter how you look at it, the Black Limited is a small piece of Toyota’s famed history.

When Kamata-san acquired his Black Limited, he knew that he didn’t want to go too over the top with modifying it. He wanted to keep all the elements that made it a Black Limited but give it the TEC-ART’S personal touch. He didn’t want it to be a full race or drift car, it could possibly do both, but it was better served as TEC-ART’S street demo vehicle. “I use this AE86 as my commuter from home to work almost every day,” Kamata says. “I have incorporated everything that I would want in a street car and I haven paid special attention to the interior. I felt that for a long time, interior styling has been ignored with this chassis so I wanted to try something different. I had so much fun designing the new interior and after building this Black Limited, TEC-ART’S now offers interior modification as a service to our customers.”

Black Limited Corolla interiors came from Toyota with black upholstery and orange stitching. Many of those original interior pieces no longer exist in Kamata’s Black Limited, but he has retained the black/orange theme. The nearly three-decades-old dashboard was removed and in its place is a complete fiberglass replacement dash. The interior trim (along with the trim ring around the necessary gauges in the Corolla) have all been done in a matching orange; the center console, door panels and the passenger seat have been re-wrapped as well. A single Juran Racing bucket seat replaces the OEM driver-seat, and it’s in a matching black/orange color as well. One noteworthy modification that is a first is the upholstering of the Trueno’s rollcage. Kamata used some netting materials (think sink mats) he had laying around the shop and wrapped the cage for a truly one-off look.

Since the Black Limited Truenos are identical mechanically to the more-readily available GT Apex model of that era, there was no necessity in preserving the aged 4A-GE motor. Under the FRP hood is a somewhat familiar-looking engine; it’s a 4A-GE for sure—the top half anyway. The casual enthusiast may see it and think that it is just an average turbocharged 4A-G but the bottom half, and most importantly the guts of it, reveal that it is a hybrid “7A-G”. When we say “hybrid”, we don’t mean electric green machine either. The 7A-G is a larger displacement version of the 4A-GE motor, created by the combination of a 4A-GE head and a newer 7A-FE block.

“The use of 7A-Gs has increased over the years. You can make the same amount of power as a 4A-GE or more without having to spend as much money. There is nothing wrong with the original motor, but many times, these engines have grown old, are worn-out and are not worth building without the necessary maintenance. It also becomes problematic if you try to push a 4A-GE beyond 200 horsepower. With the larger displacement 7A-G, the power and feel is very different, especially in turbocharged applications,” Kamata-san explains.

Another form of modification that he’s used increasingly these last couple years is tuning on MoTeC’s standalone engine management systems. While he admits that MoTeC units can be pretty pricey, he wants the AE86 community to understand the nearly endless possibilities of tuning with it. “[MoTeC] is relatively easy to use and it is capable of managing all engine operations. You get all the information you could ever want from your engine and the more time you spend tuning it, the better results you will have. The engine response is just amazing, whether it’s on a lightly-tuned 4A-G, or a built turbo 7A-G like the one on my Black Limited Trueno. ”

The AE86 has almost 30 years under its belt and its popularity doesn’t seem to be waning any time soon. One of the reasons why it has remained such a recognizable figure in the import automotive community is due in part to guys like Kamata-san and shops like TEC-ART’S, who continue to push the envelope with these cars. TEC-ART’S is a comparatively small operation, but there is a reason why they are one of the most highly-regarded AE86 tuning shops in the world. “I try to introduce something new to the feel of the 86 every year,” he says, “It’s important to always be creative when building such an enjoyable car. Remember to have fun above all else. Trends may come and go with time but the mindset should never change!” 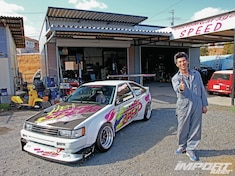 It’s good to see that, after a 30-year motorsport career, Toyota’s 1985 Corolla Levin GT still has what it takes to be a competitive track machine. - Import Tuner Magazine 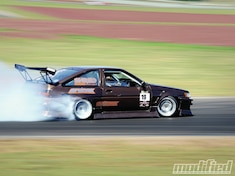 Hugo has made a wise choice for a beginning drifter with the AE 1985 Toyota Corolla. Its capable chassis and RWD layout are the perfect mould in which to pour one’s own personal flavor. Keep reading for the interview along with photos. - Modified Magazine 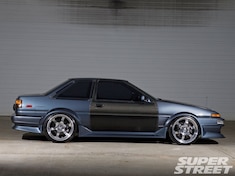 Toyotas, especially since (and during) the '80s, have had the most loyal owners. Take a look at the 1985 Toyota Corolla Hatchback and 1986 Toyota Corolla Coupe - Blood Brothers here. - Super Street Magazine 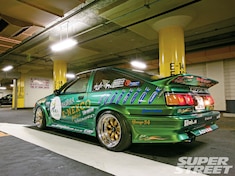