We risk our asses to bring you one of the sickest VIP sedans ever built. 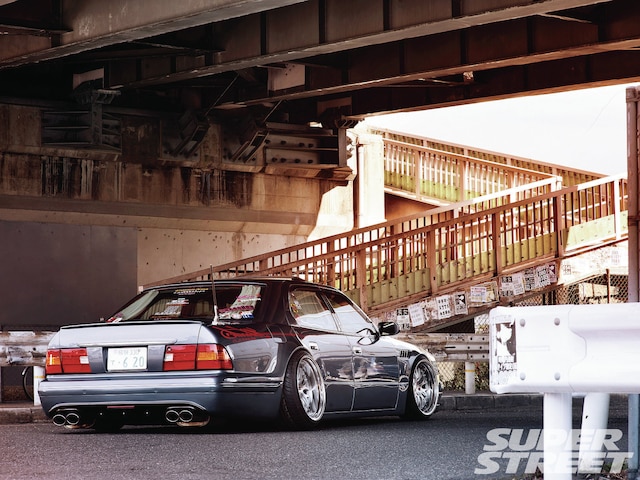 What you are about to read is a true story. No animals (or Super Street employees) were harmed in the making of this feature.

As soon as we walked through the doors of this year’s Tokyo Auto Salon, we were immediately greeted with this ’94 Toyota Celsior—you know the car as the Lexus LS400. Quite frankly, this Celsior was one of the finest VIP examples our eyes have laid on with a Century front-end swap, custom widebody, impeccable wheel fitment, air-ride and a baller interior. It had to be in the mag so we tracked down the owner Kiyoshi Mizuno and scheduled an appointment after the show.

Fast-forward a few days later and we rendezvoused with Mizuno-san at K-Break headquarters in Osaka. While we waited for the car to be washed, Sean discovered a quiet underpass one block away that would serve as the perfect location for photos. When the Celsior was ready, we had the owner position it on the road and our cameras snapped away.

We didn’t think anyone would be bothered, especially since the occasional passing car could still get around us. But on the far end of the road was a love hotel with a manager that looked on behind his desk. It soon became apparent that he was displeased with what us dumb Americans were doing.

Back home, most people would simply tell us to leave if they had a problem with our shoot. But in Japan, it’s sort of a big deal and a sign of disrespect to cause even the smallest distraction. So the hotel manager’s first reaction was to phone the police. Then to be polite, he walked out and explained to our acting guardian Tetsu that the police were already on their way. We all stood clueless as Tetsu tried to reason with the man. Then with the most concerned look on his face, Tetsu tells us that we have to leave immediately or we’re going to jail!

Hastily, we pack up our gear and make our way back to K-Break. As we pull into parking lot, a couple patrol bikes pass us by with their lights on. We hurry into the showroom feeling relieved, under the impression that we dodged a close one. But the Osaka police weren’t idiots and figured the stunning Celsior that just pulled into K-Break had to be the culprit. They circled around and Tetsu walked outside to meet them. For about five minutes (which felt like an hour), we see Tetsu debating with the officer, before he finally climbed back on his bike and left.

Now here’s a warning for anyone travelling to Japan—the police don’t mess around. The laws are rarely bent and the authorities don’t really care if you’re a tourist. We’re lucky to have Tetsu on our side. In fact, if it weren’t for Tetsu mediating, you wouldn’t be reading this magazine today! After the ordeal, we managed to get our heads back in place and interviewed Mizuno-san about his ride.

With the help of Bee Dragon and K-Break, nearly everything on the sedan was modified over the project’s three-year lifespan. From the overall fit and finish of the pulled rear fenders to the difficult Century front-end swap were spectacular. Everything flowed together seamlessly and the new front-end was trimmed and installed to look like factory. And for those who aren’t familiar with the Century, it’s the larger luxury sedan sold only in Japan with a V12 option. You typically wouldn’t see them on the road except as limos (see Tetsu’s Tales 2/12).

For a proper drop, Mizuno-san pieced together his own air suspension kit. But to get the car low enough, he cut and rebuilt the bottom floor of the car. So when the air suspension was set all the way down, there wouldn’t be any obstacles in the way.

The sedan has gone through several wheels but now sported K-Break’s newest Hybreed Cross Nine design. To tuck the tire tread under all four fenders, massive stretching was performed on all four tires along with plenty of negative camber to bend the wheels inward.

While we thought the stance and bodywork was amazing, the interior gets even more cray. Every inch was reupholstered or replaced, whether it’s the alcantara dash, seats, doors or panels to the custom carpet, seatbelts, marble center console and Louis Vuitton accents. Basically this interior is dopeness and it’s also geared up with the best McIntosh audio equipment yen can buy.

Mizuno-san concluded, “My car is not hellaflush style! It is ‘hamitai, tsuraichi!’ I want people all over the world to see my car. My dream is to display my car at SEMA. Will anybody invite me?”

We hope his wish comes true because to truly appreciate this car, you have to see the attention to detail in-person. While the sedan looks like a boss in these photos, it’s not till you get up close and personal with it that you begin to notice the extreme care and precision that puts this car on another level. It’s one of the best in the VIP scene, and if anything we had a helluva a story bringing this feature to you.

We Say VIP, They Say Bippu
By now you understand or can figure out what a VIP car is: a slammed big-bodied Japanese luxury sedan with stretched tires, cambered-out wheels and a luscious interior. Typically the cars in question come from the Toyota or Nissan camp such as the Cima, Aristo, Celsior, President, Crown and Gloria. And while we say VIP in America, this genre of cars and styling is referred to as ‘bippu’ in Japan.

While there’s no solid evidence who started the bippu movement, there are a few interpretations. Some think the trend began during the Bosozkou days in the late 70s into the 80s when cars like the Toyota Crown began using the styling cues of wide wheels and stretched tires. There’s also people who think it started for maturing car guys. They began earning more money and veered away from the sporty race-look to avoid attention from the police while still wanting to modify cars. There are other reports where the scene stemmed from Yakuza (organized crime syndicate) in their attempt to blend in with Japanese limos to avoid police and rival gangs.

Whichever story you believe, one thing’s for certain: the style lives on and has evolved. Around the world, the bippu style has been used on more than just luxury sedans such as wagons, minivans, kei cars and even sport compacts. So remember your roots and watch yourself before you call something like Mizuno-san’s car stanced or hellaflush. It’s bippu baby!

Bee Dragon Nissan Cima
Parked next to Mizuno-San’s Celsior on the K-Break stand at TAS was this ridiculous Nissan Cima (Infiniti Q45 in the US). Built by Bee Dragon, it featured a more aggressive rear wheel, tire and camber setup with flashier paint on K-Break wheels. Hot damn!

Vocab Lesson
Bippu – It’s what we call VIP. If you say, ‘vee-eye-pee’, most Japanese people won’t understand.
Tsuraichi – This is what hellaflush is, when the wheels/tires are flush with the fenders. The exact translation from ‘tsura’ and ‘ichi’ means ‘to become one’.
Turauchi – This is when the wheels are a little in (or tucked) from the fender edge.
Hamitai – When the tire sticks out beyond the fender. We would use terms like ‘poke’.
Oni-kyan – Directly translated as ‘demon camber’. This is what a lot of negative camber means.
Shakotan – This is simple…a lowered car.
Hippari – Means pulled or stretched, used when describing tires. Duh.
Luxury – The word ‘luxury’ in Japan is all the shit you’ll see in Dub magazine. Meh!

While we were waiting for Tetsu to bail us out of getting arrested, we took a little tour through K-Break’s offices. They sell body kits for virtually every VIP and K-cars, plus have an enormous accessory line including, dash mats, neck pads, seat covers, carpet, tissue cases, window curtains, drink holders, toys ash trays… The list goes on and on!