A No-Nonsense Style Wagon From the House of Fatlace. 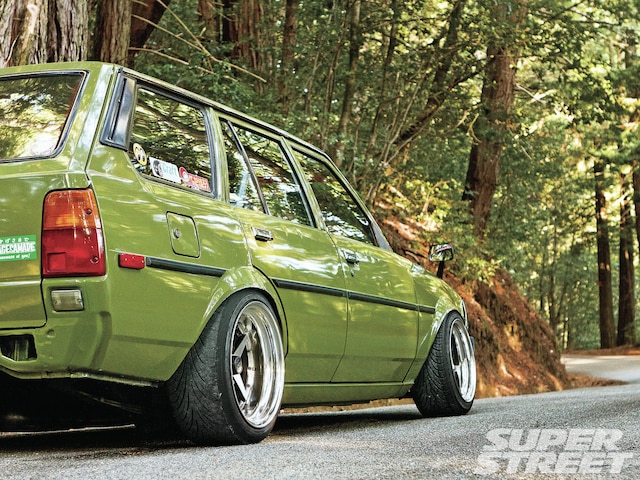 There is just something so undeniably cool about old school Japanese imports. You don’t even have to like them per se, but you can’t argue that they immediately command your attention. Most are very boxy, not very aerodynamic but have this certain appeal about them. For the past couple years, Toyota was all but forgotten in the motorsports world, and definitely not what enthusiasts wanted to tune, at least not in the way they used to with cars like the Supra. But thanks to efforts on the Scion side—especially with the release of the FR-S—Toyota’s back in a big way.

What I’m trying to say is that it’s a hard sell trying to convince people to build a newer model Toyota these days, and before the FR-S was announced, it almost seemed as if Toyota was satisfied travelling down that road. Toyotas are great for everyday people who seek reliability. The glory days of modified Toyotas belong to the ’90s and older, which is a shame. Their sports cars have always been something that enthusiasts truly cherish. Drifting brought worldwide attention to the AE86, but there were already lots of people building those cars long before the general public cared—and then, suddenly, everyone wanted one. Slowly, people started searching out older model Toyotas, and in the process, a subculture of Japanese classics began trending. Naturally, there are also a lot of enthusiasts who are also well-versed in old school culture, some old enough to be our parents (or actually are). The best part is: they never go out of style. Nostalgia is an undying trend that outlasts any popular engine swap, crazy wheel fitment or custom finish.

There are many different ways to interpret old school Japanese style but one very popular form of modification is the Shakotan style, which is a way of tuning developed decades ago in Japan where cars are outfitted with small, yet aggressively-sized wheels, and are hammered to the floor. As the years progressed, younger enthusiasts became fans of Japanese classic cars and decided to create their own interpretation of the Shakotan style. They take the essential elements to characterize that look but have added their own personal touches to make it all their own.

Kenny Chow is no stranger to style, and currently runs with the Fatlace crew, a company that is at the forefront of style for today’s younger generation. A big part of Fatlace’s culture revolves around cars, so it should come as no surprise that Kenny’s olive green E70 Corolla wagon is something very cool, even if it’s not the cleanest and fastest thing around. We love that it holds true to its traditional Japanese flair while reflecting characteristics of his personality. “I’ve always been a huge fan of Japanese classics and wagons in particular,” Kenny says. “Before I picked-up this Corolla, I owned a couple of AE86s and was looking for another. But they became too popular, and as a result, too expensive, so I decided to build a wagon instead.”

Modified Corollas of this chassis tend to retain an appearance much like Kenny’s. They are relatively simple, slammed and roll on some wide, rare, Japanese wheels. You won’t find that huge of a differentiation between other Corollas because they never had nearly as much aftermarket support as the AE86 Hachi-Rokus. Many times, owners had to have their own parts fabricated or utilized components from other Corollas that they made work. Since Kenny had been a previous owner of a couple AE86s, he realized there were many parts were interchangeable. He says, “Parts are definitely harder to find for this car in the U.S. The chassis just isn’t all that popular over here, so I had to make do with what I could find. Luckily, AE86 parts are common and make for suitable replacements.”

The heart of Kenny’s wagon is a Red Top 4A-GE motor, one of the key ingredients that once belonged in an AE86 Corolla. He never expected the powerplant to produce any serious power, but it didn’t stop him from installing an HKS intake, TRD header and custom Magnaflow exhaust. A host of other AE86 parts can be found on this wagon as well, including an OEM front brake swap and a pair of front springs that once belonged on a set of AE86 coilovers. Speaking of the suspension, the combination of parts that help bring this chassis lower to the ground is a particularly interesting one. These Corollas were never meant to be slammed, so guys like Kenny had to mix and match parts for the preferred ride height. The 86 coilover springs were mated to non-coilover KYB AGX struts up front, while in the rear, 4-inch lowering blocks were used in conjunction with rear shocks from a Chevrolet Camaro. Strange, yes, but people will literally do whatever it takes to get their car to sit on the floor. Resting flush with the pulled fenders of the E70 are Shakotan-faithful 15x8.5-inch, negative offset, Work Equip 01s.

A set of Japanese-spec KE70 Kouki headlights, grille and chrome bumper highlight the exterior of the Corolla. Traditional fender-mounted side mirrors have also been installed and the rear bumper has been removed to not only streamline the look of the wagon, but to follow nostalgic cues of older generation Corollas. On the rear glass, you’ll notice decals from various origins; one might even assume that he’s just another hype beast that likes to put stickers everywhere, but on the contrary, each decal holds a special meaning. They give a glimpse of hobbies that Kenny is into, such as skating and snowboarding, along with Fatlace stickers that denote his occupation and allegiance. The interior of this wagon is relative to the exterior; some parts old, some new. Much of the nearly three decades-old interior remains, with the only additions being a single Bride Zeta II bucket and a host of Auto meter gauges.

“I’ve had this wagon for 8 years now and it’s been a fun project,” Kenny explains. “I actually just got it running again because I had a bunch of electrical problems and it was just sitting in my backyard for years. Good thing it’s an old car because I could bring it back anytime. That’s why it’s great to have an old school Japanese car—it never goes out of style!” 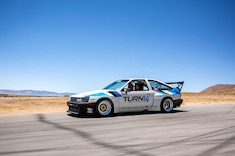