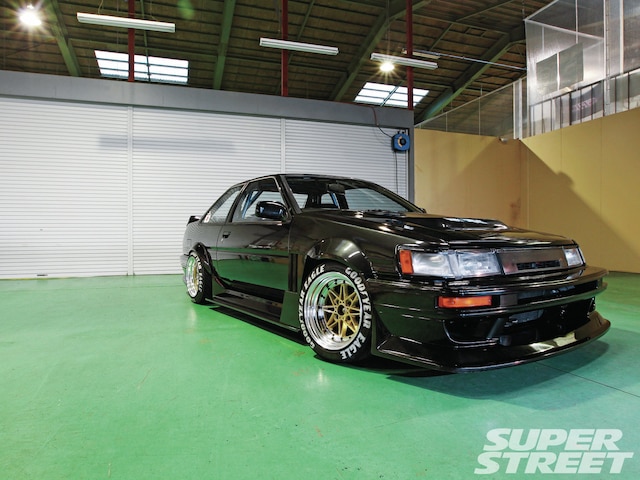 It’s not often that someone starts drifting at the age of 50. Usually that’s when some of us might consider the thought hooning around less in cars, but not Imai-san of Bee*Racing. A pioneer in the Japanese tuning world, he’s has done it all at Bee*Racing (Bee*R), starting off as one of the first GT-R tuners in the early nineties, building and racing potent drag and race cars before taking the leap into D1 and drifting. His easygoing and cheerful character has allowed him to give his best over the years, and aside from creating one of the most recognized and respected names in the industry he has never forgotten how to enjoy himself. This is precisely why he has now decided that, after close to a decade of running a D1 team and building top-level drift cars, it’s his turn to get behind the wheel and have some fun on his days off.

Being Bee*R, you know that any car rolling out of this Tokyo workshop is going to be noticed. Imai tells us that he wanted to do this the right way so he needed the best, but at the same time, the most challenging practice car possible. The AE86 is a great platform for professional drifters that know what they’re doing but its tricky character will put novices to the test. That’s why he’s using a 4A-GZE, the factory supercharged version of Toyota’s peppy 1.6L. But to help keep costs down and get the most out of it, the blower was removed and in its place, a GT25 Garrett turbo from an R32 Skyline GT-R. Hanging off a vintage piece of HKS cast iron metal, a manifold that HKS provided in their 4A-GE turbo kit from the ‘80s, it has a little new school twist as the external wastegate flange is now closed off since the turbo features a built-in valve and actuator. Custom-made piping and a small HKS intercooler complete the turbo system. A custom straight-through Bee*R exhaust gives the Hachi-Roku a rowdy tone; the last remaining modification (for now) is the HKS F-Con V Pro piggy-back ECU, custom mapped and set-up to get the most out of the turbocharger—we’re told it spools up nicely with just enough torque down in lower RPMs, which is what you want when you’re learning how to slide around. Of course, you need a stronger drivetrain, so they installed a single plate clutch and 2-way LSD, both from TRD Japan.

Twenty-six years of service to the aftermarket tuning world makes the AE86 one of the most respected cars to modify out there—to say everything’s been done is an understatement. This said however, Imai has managed to come up with an incredibly modern take on the classic RWD. This was accomplished by fusing a Run Free aero kit, using the front and rear bumpers and side skirts and custom-widened Bee*R fiberglass front fenders. These were inspired by GT race cars, featuring a louvered section where the doors meet; the overfenders give a similar kick to the rear width of the car. More aero, like the Origin vented hood and TRA Kyoto 6666 S13 ducktail spoiler are pure touches of genius. Type-S coilovers with a firm spring rate are ideal for drifting, and Cusco camber plates help give the front wheels that slight bit of inward tilt for optimal grip and feel when the rear end slides out. We also love the old school 15" Work Equip 03s, perfect on this build.

Opening the driver side door reveals an unexpectedly, yet highly accessorized interior, especially for a drift car. Where most would expect to see ripped off plastic trim and exposed metal around the floor and transmission tunnel, Imai went a little carbon-fiber crazy by covering the whole dash with a wet-carbon cover and replaced the door panels with molded carbon replacements. To stiffen the aging chassis, a Cusco half-cage has been bolted in place, allowing the AE86 to retain some of its practicality. Bee*R actually keeps their operation somewhat sustainable, using an older Bride seat for the driver from a past project.

As Imai’s drifting improves, the idea is to dump the turbocharged engine and replace it with a fully-built, high-compression, naturally-aspirated 4A-GE, a setup that would force his drifting skills to mature. With all the private tutoring he has been receiving from Keiichi Tsuchiya and the Bee*R drift team, this might be happening much sooner than expected! 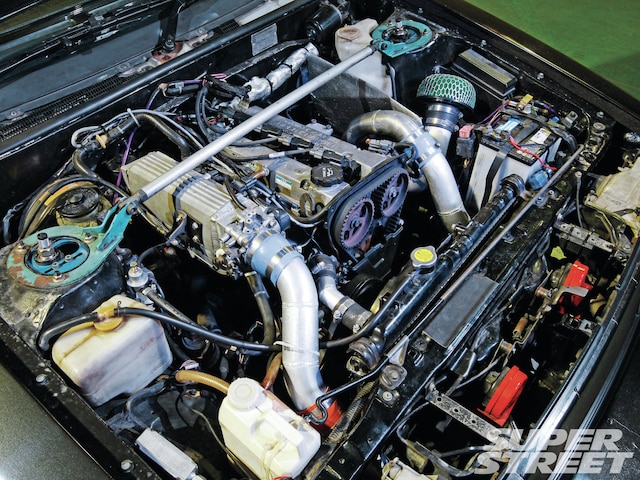