A Classic Datsun Brought Back to Life Using Unconventional Parts.

The old adage of “working with what you’ve got” is a saying that certainly applies to all aspects of life. With car-modding, that axiom holds true for every one of us. At times it may seem as if some have unlimited resources, producing amazing builds that we couldn’t fathom creating on our own. There are also those who have very limited resources but are able to express themselves in their builds through other ways. Sometimes the enthusiasts who don’t have as much are able to produce something really unique because they’ve been forced to work with what they’ve got. Remember, that anybody can go out and buy parts—how you put it all together in the end is what really matters.

Mallen Fajardo is by no means in a bad place. Life priorities, like work, supporting a family and a mortgage have kept him from his favorite hobby, this Datsun 510. “I’ve always wanted an older Datsun ever since I got into cars back in 1996,” he recalls. “I’ve been a long-time Nissan fanatic and it always felt like I was missing the one car I’ve always wanted. At one point I had two Nissan 240SXs but I decided to get rid of them so I could concentrate on ‘being an adult’, I guess you could say. I wanted to get a house for my family so I sold all my toys. No matter how hard I tried though, the hobby just kept calling me back. I took a break for a couple years but decided look on Craigslist to see what was out there. I found this ’71 Datsun 510 locally and just knew that I had to get it.”

We first spotted his 510 at a car show in Southern California last year. There are some very interesting things about it that caught our eye. A quick glance at the engine bay revealed an air intake that looked like an awkward robot arm—but that was just one of many attention-grabbing details. This dime had a lot of different parts on it that, well, to put it simply, didn’t belong on a 510. “I bought the car with a KA24DE motor from a ’95 240SX. It wasn’t a turbo SR20 or anything but I thought it was a good swap, and it was—until I actually drove it. It leaked fuel, coolant, oil and every other liquid you could find. It also had vacuum leaks and smelled like gas every time I turned it on. Even the carpet had disintegrated with age. Even though it had some problems, it was worth it for me because it was the car I wanted. I gave the guy some cash on top of a set of Volk Racing wheels that I had taken off of my daily Honda Fit and took it home. Oh, I forgot to mention that after I gave the guy the cash, he handed me the keys and a block of wood with a rope on it. I asked him what it was for and he told me it was my parking brake!”

On paper, it doesn’t really sound like a good purchase but Mallen was content. Being familiar with the KA24DE motor having worked on them previously, he was more than comfortable with the car. In his eyes, it was a diamond in the rough. The shell itself was pretty raw so it didn’t require much tear down, he just had to fix all the problems before he could start with the modifications. He tells us, “I did all the work in my garage. I changed the oil, coolant, fixed all the leaks and converted all the vacuum hoses to AN lines. In the process, I also shaved the engine bay and tucked away the engine harness. The issue with the parking brake was actually pretty easy to fix as it just need some adjusting. I eventually swapped over to brakes and suspension from a Datsun 280ZX and everything functioned properly. I still have that block of wood but I use it to ward off thieves and other random things.”

It would seem that Mallen’s 510 project was in full effect but his family was still his number one priority. He devoted a majority of his resources to maintaining that part of his life and used whatever was left on his build. It’s no secret that this 510 is a little rough around the edges. He couldn’t afford to do a complete restoration so he added details to it to set it apart and to update the overall look of the car. He searched high and low for deals and obtained some components that others might consider to be their junk. “I wanted to keep the motor oil cool since I had oil-burning issues with my previous KA engines, so I added an external oil cooler off of an ‘86 Mazda RX-7. I even created custom oil lines and relocated the oil filter using a kit from GReddy that was originally meant for an R34 Skyline.”

The amalgamation of parts didn’t stop there; Mallen discovered that an old VW Rabbit radiator would work on the 510 and modified it in a way to keep it hidden from plain view. If you look out the backside, you’ll notice a NISMO Sport muffler is mounted upside down—that’s because the muffler was intended for a newer Japanese-market Nissan March. He got a good deal on it and mounting it upside down was the only way to make it work properly. Covering his KA intake manifold is a carbon fiber manifold cover off of his Honda Fit. From what he describes, he was just staring at it one day and figured that it might fit. The most significant and obvious change to his yellow Datsun are the retro-fitted late-model Toyota Tacoma headlights. Like the exhaust, they too are turned upside down to fit and are an idea inspired by Bosozoku-styled Japanese classics. While they certainly don’t fit seamlessly with the car, it adds to the character and uniqueness of his build.

A BRE carbon-fiber front air dam is one of the few components that are actually meant for his 510 and is mounted underneath the RX-7 oil cooler. Above that you’ll find a stock front bumper that was shortened to give his Datsun a more streamlined-look. Much like the exterior, the inside also carries a Frankenstein-theme. He’s added a push-button start feature, Recaro LXI seats and his shifter is actually the handle of a Japanese Katana sword. How’s that for unique? Attached to the aged-dashboard is a center console from a newer model Mini Cooper, which was altered along with a gauge pod from a ‘70s Chevy Nova to fit the Auto Meter gauges.

For the Datsun 510 purists, could be seen as an absolute abomination and bastardization of a true Japanese classic—we see it differently. Mallen let his imagination run wild and hasn’t let the pressures of life hold him back from creating something that is one of a kind. Not only does he have the perfect family life, but also a Datsun he has always dreamt of owning. What used to be trash is now his treasure.

Thanks You my wife and family for putting up with my addiction to cars all these years; Ryan Der from ATSgarage; Joey from stickydiljoe.com; Ray at Mach III San Francisco; my co-pilots, Mike Amigleo and Joe Bacigalupi; Phil from Image Autobody South San Francisco; Mals Garage for all his hard work! 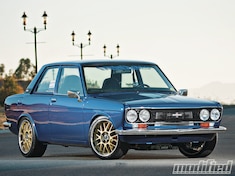 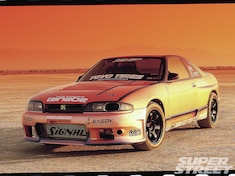