How many slammed show cars can run 11s? This STI can! 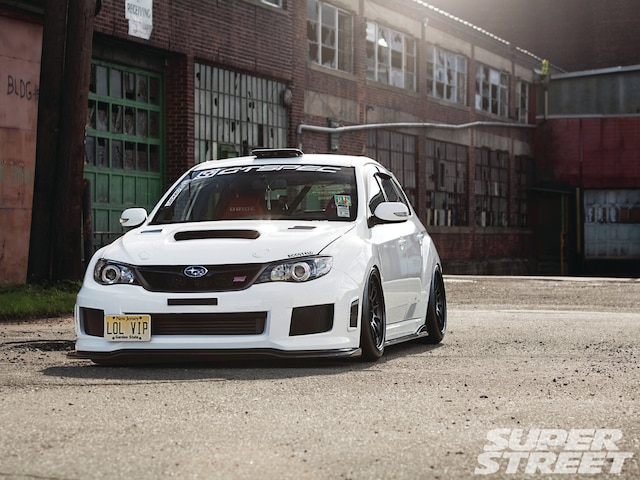 Rick Gonzalez might be 45 years-old but he's been a car guy since he was mastering his times tables. At a very early age (which will remain undisclosed), his father, a seasoned mechanic, showed him the ropes around the garage and behind the steering wheel. When Rick reached the legal driving age, he was already ahead of the game and spent every other weekend burning rubber on the drag strip piloting whatever muscle car his dad was wrenching on. Rick's passion for driving eventually turned into building project cars. Some of his favorites included a '74 Chevy Impala, '80 Mazda GLC, and Honda Civic, but within the last ten years Subaru took control over Rick.

"I got into Subarus purely out of the passion for stock cars that can run thirteen's," he explained. "I thought to myself, ‘Imagine what I can do with it?'"

Rick popped his Subie cherry with a '04 WRX before he moved on to this Aspen white '08 STI. The hatchback was an easy sell for him—faster and more versatile than the older STI with plenty of room for him and his family. The all-wheel drive hatch also boasted a wider track and a new diff for phenomenal traction. When the car finally made its home in Rick's garage, he didn't waste any time getting to work.

For the WRX's theme, Rick wanted the best of both worlds. At one end of the spectrum, he saw himself flossing in one kick-ass show car. But at the other end, he still had a thing for drag racing and didn't want to get left in the dust. So he addressed the motor first piecing together a turbo kit using a Garrett GT3582R. A new fuel system was thrown into the mix which required Rick to modify the lines, fabricate a custom rail and add 1000cc injectors and a high-flow pump. After installing a beefier downpipe and exhaust, plus a front-mount intercooler and water/meth injection, Rick enlisted the help of Precision Tuning to take care of the tune. The final dyno resulted in a healthy 451whp and 401 lb-ft of torque. And what do you think Rick's first order of business was after the dyno? Yes, you guessed it, a visit to his local dragstrip. After changing the STI's shoes to Hoosier slicks, Rick put down a best time of 11.4-seconds at 127mph—that's even with a rough sixty-foot start!

Still smiling from ear-to-ear, Rick shifted his focus to the STI's supermodel looks. Maintaining a clean and simple style, he updated the entire front-end with the '11 facelift, before adding a few sporty pieces like the carbon front spoiler, side skirts and a modified rear wing that Rick trimmed himself to appear more menacing.

The wheels for Rick's STI matched the rest of the car. He opted against any over-glamorous rim designs but kept it race-inspired and lightweight sticking to 18x10.5" Enkei NT03+Ms. He powedercoated them matte black giving the exterior a bit of contrast and tension from the body color.

Next, the interior received its fair share of top-notch goodies including bright red suede Bride seats, Takata harnesses and a Nardi wheel. It didn't stop there with more nice swag thrown in such as the suede headliner, rollbar with the integrated water/meth tank and a very serious audio setup in the trunk.

The most talked about part of the Subie is none other than the suspension. "When I go to shows, I want that low stance. I didn't want to have to deal with adjusting coilovers and messing with the camber," he told us. It's going to piss off the Subie purists, but Rick decided to go with air ride. He talked to SP Customs in Arizona who designed a custom bags-over-coil setup using Cusco coilovers and universal air bags. The end result isn't too slammed but pretty damn low compared to the majority of modified Subarus.

It took two-and-a-half years for Rick to get this far with the project. He still has a few tricks up his sleeves for the next couple of years including a full wire tuck and shaved engine bay. It'll definitely be more of a show car by the sound of it but he's already proven himself worthy. While it might have air suspension and some showy pieces, it still has the time slips to prove that it's not a force to be f'ked with. 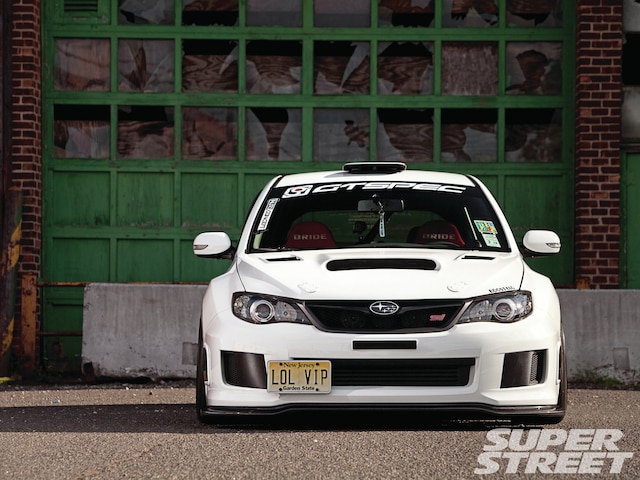 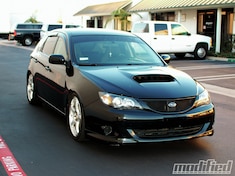 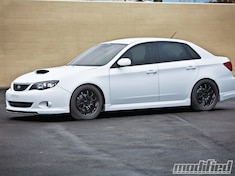 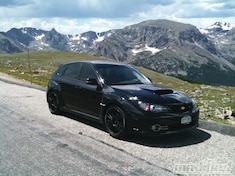 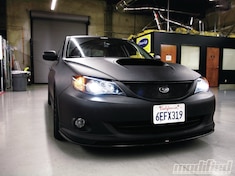 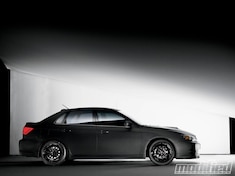 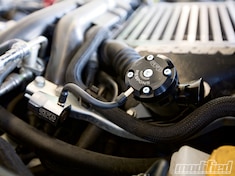 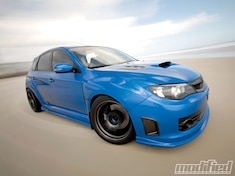