Home  |  Features  |  2004 Lamborghini Murcielago - Have Murci
Subscribe to the Free

Widebody Lamborghini Murcielago on the cover of Super Street? Why not?!

You're either saying to yourself, "what the f@#k?" or "f@#k yeah!" This Murcielago isn't your typical Super Street feature car but we hope you feel the same way about it as we do. This Lambo is the shit!

While many of us aren't versed in exotic supercars and will likely never own or drive one, we can all appreciate a well-executed project. Car enthusiasts are car enthusiasts. Unless you're a mad hater, there are no boundaries to what we can like and appreciate-whether it's Hondas, hot rods, Bimmers, Mustangs and even Lambos. This particular Murcielago was one of the most talked about cars at SEMA. Chances are you've seen hundreds of pictures of this Murci on Facebook, but we couldn't let it go unnoticed to our readers before giving it the recognition and quality photography it deserves.

Let's get something out of the way first though; this raging bull isn't your typical Lambo. You won't find it posted in front of a Gucci store with candy-colored wheels and Louis Vuitton upholstery. The origins of this build are from Japan. While many can say the exterior is a bit over-the-top with riveted fenders and a brushed aluminum style exterior, we feel it's beautifully done without being overly tacky and adding unnecessary parts. It's motorsport-themed, yet intended to drive and dominate on the street, which is exactly what the owner Wataru Kato, CEO of Liberty Walk, intended.

Just a brief history behind Kato-san and his company, Liberty Walk specializes in all types of custom fabrication and installation. Established in '93, the tuner has built a name for themselves designing body kits for Chrysler 300Cs, Suzukis, Dodge Chargers and of course, Lamborghinis. The Lamborghini division is known as LB Performance where full body kits are offered for the Gallardo, Murcielago and soon Aventador. There are over 50 complete LB Performance cars worldwide but this new widebody example is without a doubt the shop's sickest project to date.

The story of this Murci starts in Japan with some familiar faces you might know. We begin with Mark Arcenal, the father of Fatlace, Illest and Hellaflush. He's also the catalyst that brought Rauh-Welt Begriff and all their Porsche glory to North America. Two years ago, Mark put on his Hellaflush show in Kansai, Japan where he was introduced to Kato-san. Mark offered up his shop to Liberty Walk in the case they ever needed a place to build a car. A few months later, Liberty Walk was knocking at Fatlace's door. Kato-san purchased this '04 Murcielago and had it delivered to Fatlace headquarters where it would be transformed and set to debut at SEMA.

At this time, two more players came into the picture. We learned that Mr. Rocket Bunny himself, Kei Muira of Tra Kyoto was a key part in the design of the fenders. RWB boss Akira Nakai was also involved. Although Nakai-san didn't have anything to do with Liberty Walk and their cars, he had vast experience designing and building over fenders so he came to Fatlace and ensured a perfect install.

Without a doubt, the fenders are the project's bread and butter. According to Liberty Walk, the fenders are based on the slammed and wide 'shakotan'-style that became popular in Japan more than 30 years ago. Kato-san hasn't seen many tuners using over fenders currently except for companies like RWB and Tra Kyoto, so he decided to reintroduce it with his Lamborghini program.

While the Murci flares look mega wide, they only extend the body five centimeters per corner. But the amount of metal that had to be chopped off will make you cringe-the front fenders were cut 5" while the rears were butchered 7". If you ask us, that's hard to stomach considering Murcis retailed for more than a quarter-million US dollars and there were only 4,000 made in the world. Bye-bye resale value!

The LB Performance treatment continued with a more aggressive front bumper and lip spoiler. The rear featured a lower diffuser, wing and exhaust tips, plus side skirts were mounted to flow with the fenders and give the Murci the illusion that it's lower. The stock suspension is height adjustable and the car is lowered from stock height, according to Mastermind NA.

After Nakai-san finished his magic on the body, it was time for paint. Instead of going with a typical candy or matte paint job, Kato-san wanted the car to look like it was straight out of Top Gun. So what better look than a brushed aluminum finish to give it a raw metallic, fighter jet feeling. He flew in guys from Boomcraft Japan to complete the intricate wrap.

The bigger brakes were imported from a company called CSD Japan, however Kato-san decided to go American with the wheels. Through Liberty Walk's close relationship with Mastermind NA in Southern California, who's also the exclusive US distributor for everything LB Performance, the Murci received a custom set of iForged Equip V3 wheels. The forged aluminum rims feature a super concave shape making the 19x8.5" fronts and 20x13" rears appear massive. Toyo Tires supplied the crazy sizing of T1R rubbers.

While this Murci looks out of this world, we've basically summed up its modifications. Everything is mostly aesthetic leaving the engine and drivetrain factory. First-gen Murcis come out of the box with a 571hp V12 motor that's capable of 3.7-second zero-to-sixty and a top speed of 205mph. It's also one of the best sounding engines in the world so we don't mind that Kato-san left the motor untouched aside from a custom exhaust tip.

The body kit alone cost $30K, add in the price of the car, wheels, brakes and wrap, this is probably the most expensive ride to grace the cover of our magazine. We hope you enjoyed our decision to feature Liberty Walk's creation. While 99.9% of us can't relate to spending this kind of money, we can relate to the style, passion and balls it took to build this car. We also have to give props where props are due and accept how the scene has evolved. We can't be limited to just Hondas, Evos and GT-Rs anymore, but appreciate any project car that's nicely done on four wheels. If you hate our decision, show us a 'lil mercy! We'll be back with more of your regularly scheduled Super Street programming next month.

Occupation chopping up Lambos and making it rain 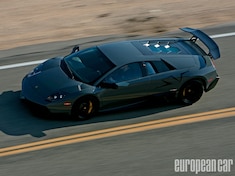 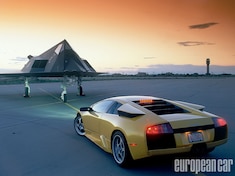 This money shot is of a stealth fighter, F-117 Nighthawk, and a first-gen Lamborghini Murcielago. Do you have a photo worthy of being named a money shot? Send it in! - European Car Magazine

Lamborghini Murcielago - Bat Out Of Hell

Check out our first look at the Lamborghini Murcilago, it's even more engaging to look at than a Ferrari - European Car Magazine 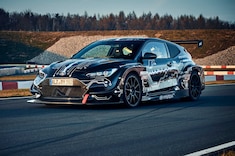