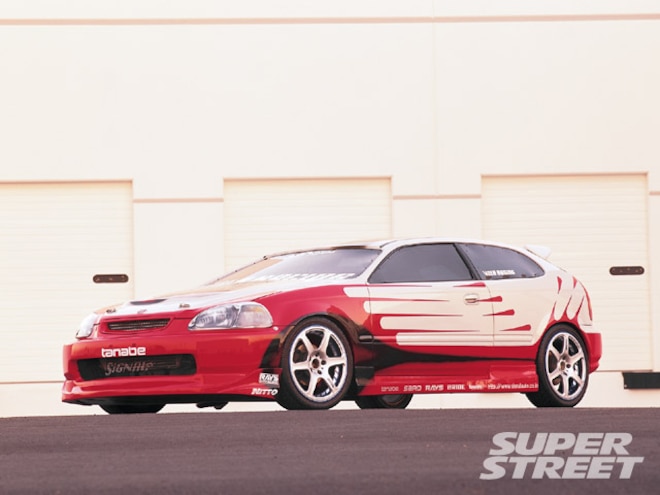 So, have you welcomed the NBA back into your life? Are you looking forward to seeing the Celtics in the playoffs? Do stylistic Nike commercials once again bring a warm, fuzzy feeling to your heart? Personally, I'm just glad the lockout is over-I was getting really tired of watching 47 minutes of hockey highlights each night on SportsCenter. 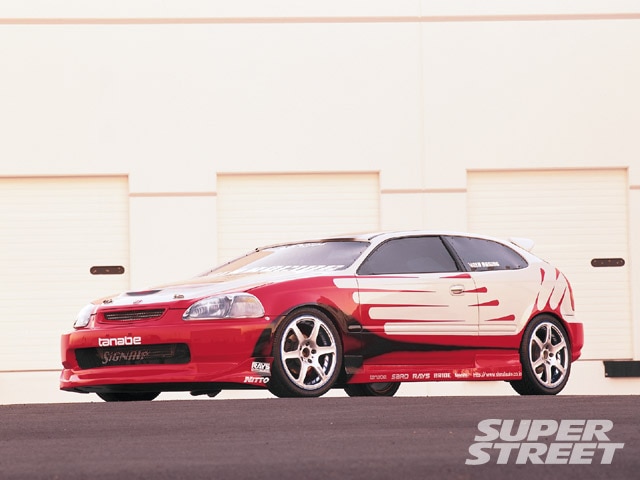 Lots of people are worried that the NBA lockout caused young fans to lose interest. Not to worry-Super Street has a solution. The NBA just needs a little positive PR. To get closer to our readers, we suggest this: have Patrick Ewing and that ilk stop riding around in 5,000-pound Mercedes Benzs and start driving cars like the Signal Auto Civic Type R.

Signal Auto is, believe it or not, a used car company based in Osaka, Japan. Its primary business is selling and dealing with used modified performance cars. Signal Auto built up this Civic Type R to gain additional exposure by racing it in America. We first saw the Civic in the Volk booth at the '98 SEMA show. With its chopped roof, 17-inch Daytona Speed wheels, and vivid red graphics, the Civic was constantly mobbed like a display of $1 Furbies at Wal-Mart. We couldn't even get a clean shot of it. Its picture on our Feb. '99 cover was only possible because of staffer Rich: He announced to the crowd around the car that the Playboy Playmates were signing autographs at the Pirelli booth-naked. Wow, did that work.

Chopping the top of a car is nothing new. Guys with old American V-8 customs have been doing it to their cars for 50 years. But we've never seen it done to a '98 Civic Type R before, which makes it pretty cool. The 4.7-inch reduction of roof height is designed to reduce both aerodynamic drag and weight. To reduce weight further, Signal Auto replaced the stock hood and front end with fiberglass. Yep, the headlights are only painted on. The Civic also has a Kosquito body kit, Lexan windows, and airbrushed graphics over the pearl white and red paint.

Underneath the hood is a turbocharged 1.6L DOHC VTEC Civic Type R engine. With its painted valve cover and super-clean engine bay, it almost looks too nice to race. The turbo is a Sard/KKK unit that blows through custom piping and a front-mounted Trust intercooler that was originally meant for a Nissan Skyline GT-R. Boost and fuel controllers are provided by Trust and work in conjunction with a modified ECU. The engine's internals have been fortified with JE pistons and Crower connecting rods. The compression ratio is said to be 8.25:1, and power is delivered to the ground through a Cross transmission, twin-plate clutch, and limited-slip differential. The cylinder head has been fitted with custom camshafts, valves, and valve springs. Exhaust gases exit through a fabricated stainless-steel exhaust.

Signal's Civic rides considerably lower than stock thanks to a set of Tanabe Sustec Pro coilovers. The wheels are 17x7-inch Volk Racing Daytona Speeds with 205/40ZR17 Nitto NT450s, though in our photography, you'll also see 16-inch bronze TE37s. Stiffer suspension and engine-mount bushings are used and up front is a Tanabe strut tower brace. The rollcage inside is custom. Almost all of the interior pieces have been removed. The only things remaining are an ATL fuel cell, a Bride racing seat, SARD gauges in a custom dash, lightweight door panels, Räzo pedals, and a Victoria removable steering wheel.

OK, OK, so you've skipped through all of the previous paragraphs. All you want is the meat: Howfastisit? Whatsitrun? Well, you'll have to wait. Signal hasn't raced the Civic at an official event yet. And our spies tell us that, in fact, the Civic is undergoing modifications at DPR in Torrance, California, to make it even faster. As soon as it makes a pass, we'll be there, cameras in hand.