What was once an enthusiast's first car and naturally aspirated daily driver is now one of Australia's standout Subaru wagon builds. 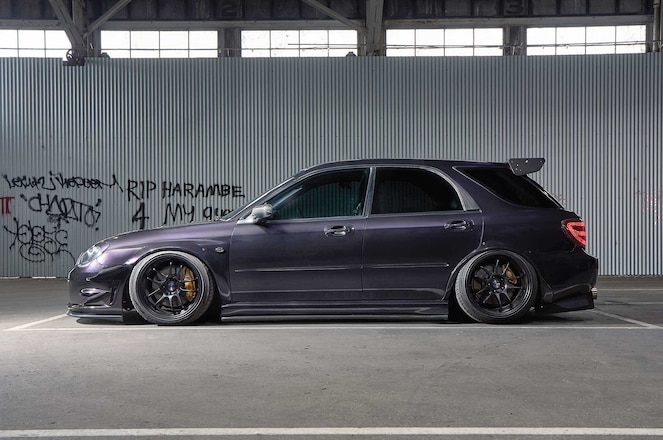 EDITOR'S NOTE I'd like to preface this 2006 Subaru Impreza wagon story with a few notes on why I decided to feature it. Admittedly, it's not your typical Super Street-style feature car. I've been inclined to showcase builds that have a set theme or perhaps follow function over form. This is an all-wheel drive Subaru on air ride that has a lot of makeshift parts and has been wrapped twice. It doesn't have a long list of JDM goodies and doesn't rock expensive forged wheels like the majority of our features. On the flipside, what drew me to this Subie was its story.

The owner, Anthony Summut is from Melbourne, Australia and he's been on a 12-year journey to get to the point he's at today. His parents helped him acquire this 'safe and functional' wagon but it lacked power, especially for an enthusiastic teenager with a thirst for speed. Money didn't fall from the trees, so Anthony slowly evolved his project by learning a lot of tricks, buying second-hand parts and making certain components himself. 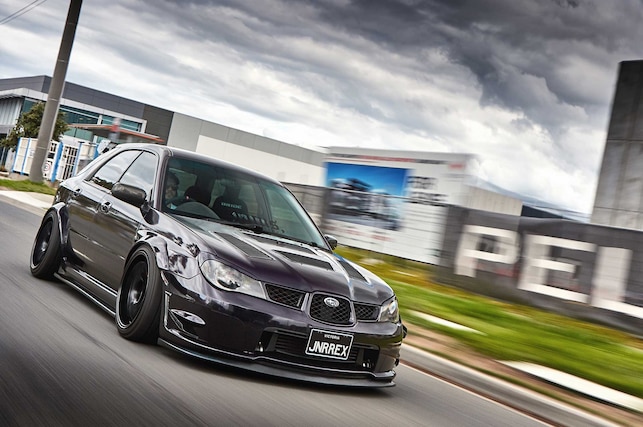 It's easy to recognize this build for its later-gen STI engine swap and big turbo upgrade, but for me, it was the many years of trial and error and figuring things out along the way that make it extraordinary. Unfortunately, at the time of publishing this web story, Anthony's Subaru is back under the knife and he's saving up money for his next engine setup, but it goes to show every build isn't perfect and most of the time never finished. Perhaps that's what makes this all so special though. Having an unforgettable journey with defeat, triumph and developing stronger friendships is ten times better than owning the "perfect" project car in my book. - Sam Du

DIDN'T WANT A SUBARU AT FIRST

"In 2008, when I was about to get my license, I wasn't looking at Subarus. I wanted a black Ford Falcon sedan with a manual gearbox and a leather interior," says Anthony Sammut. "However, one weekend my dad was like 'what about a Subaru?'. We went and looked at a black one first—didn't really like it—then my parents went and looked at this one without me, and then they bought it for me. I came back from a motorbike ride and they were like 'we bought that car'." So began Anthony's journey with this 2006 Impreza wagon. 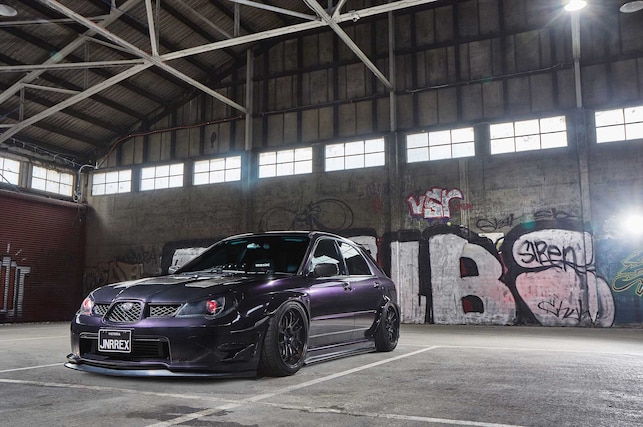 Growing up in a car enthusiast family, Anthony was never going to leave it stock for long, but the usual money issues of youth meant things began slowly. Wheels, lowering, exhaust, etc.—the usual. As the years went by, the mods got bigger but eventually, with it still being a puny 135hp naturally aspirated 2.2-liter powertrain, Anthony was ready to trade up; however, being his first project car, it meant too much to him sentimentally.

"It got to a point where I was going to sell it because I wanted to buy an STi. But then I was just like, 'I can't get rid of this". That's when I decided to turbo the NA motor."

Turbocharging a stock naturally aspirated motor on any platform is generally an uphill battle. You're adding boost to an engine that wasn't designed and engineered to be that way. "Every time someone asked on the forums how much it was to do; people would be like 'it's not worth it; it's going to cost you this much etc.' But in reality, it only took four days to finish and cost me $1,300, which included the turbo, manifold, small intercooler, injectors...everything." Admittedly, he saved a bit of money by using his older brother's leftover stock intercooler piping (his brother also drives a heavily-modified Subie), but most of the money saved came from buying everything second-hand and fitting it all himself. "The intercooler was $20. The most expensive thing I bought was the wideband," he remembers. 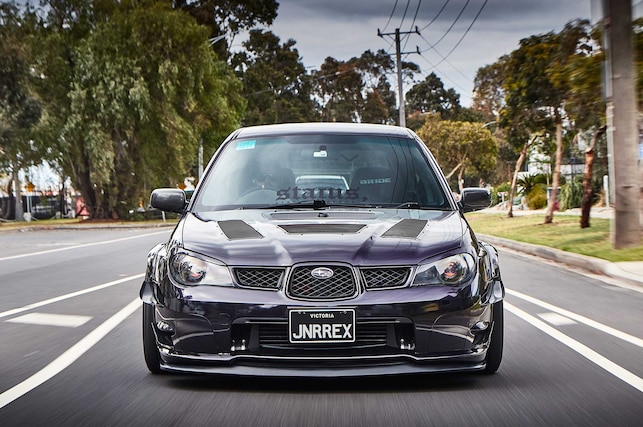 Anthony drove it around in this state for two-and-a-half years at 10psi of boost, enjoying it first as his daily driver (he's an electrician by trade, and kept all his tools and equipment in the back at one time), then later as his weekender when he got a company car. "It kept up with stock turbocharged WRXs at the time. So, it was a big jump from NA, but wasn't the fastest thing on the road. I just enjoyed it because I made it myself," he says.

THE MODS BEGAN TO POUR IN

Having got his company car, Anthony went deeper and began modding his Subie more, adding the current Air Lift suspension followed by the sedan front-end, Karlton fender flares, STi Brembos and even the factory STI six-speed. Inside, he fitted Bride ZETA III seats, a mix of ancillary gauges (now all AEM) and an OMP Corsica wheel with Works Bell hub. Finally, just before the 2015 World Time Attack Challenge Show & Shine, he got the car wrapped in a bright blue (adding the STi lip and side skirts). "It got a really good reaction from everyone. I don't think I saw any negative comments on social media, so I was pretty proud," he says. "For me to create something like that from scratch, knowing I did everything myself bar the wrap, it was a really good feeling". However, Anthony wasn't done quite yet. While it was still blue, he updated the interior with a velveteen dash wrap, Ecliptech shift lights, Cobb short shifter and We Are Likewise shift knob and handbrake button. 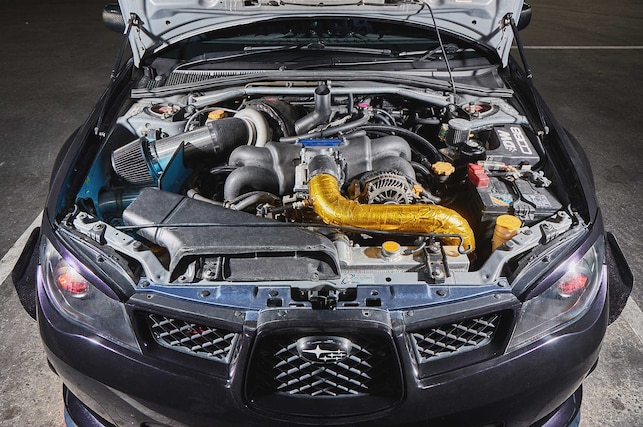 The wagon was as thoroughly built as he could've possibly done, minus the power. So, he bought a second-hand STI EJ25 long-block, rebuilt it with fresh bearings and gaskets, then fitted it all in himself.

Funny story: Because he knew the new motor was in the works, he also gave the old one a fitting sendoff by testing how much boost it could handle. "One night, at 18psi, I found that limit, and sent a piston into the sump," he chuckles. RIP!

Anyways, Anthony wasn't about to just chuck the new mill in there and plumb it up with all the old ancillaries. He fitted a flipped second-hand Cosworth intake manifold around (the front-mounted throttle body looked better and meant better piping routes; this meant sacrificing air-con and making a custom bracket to shift the alternator over, but sometimes you can't have it all, right?), then bolted up a twist-mount Garrett GTX3582R Gen II turbo, PSR unequal-length headers, Aeroflow intercooler, Mishimoto oil cooler and Radium fuel rails and surge tank, all while fabricating all the piping and lines himself. With the Link G4+ ECU tuned by renowned Melbourne Subaru specialists GotItRex, the reborn EJ saw 460 all-wheel horsepower.

With the engine in, it was time to change the look of the vehicle, especially with a big tilt-mount turbo up front that has no problems attracting police attention. He ripped off the previous bright blue wrap for its current 3M Gloss Wicked purple (looks pretty much black in the night). He also fitted the custom rear diffuser and LED tails, as well as the Singular Motorsports hood vents, scoop delete and his own custom-made rear wing. Rather undermining his 'stealth' approach, Anthony also figured he'd use some bits of leftover pipe to create a hood-exit screamer, which, hilariously, has never seen him pulled over or even warned by cops at car shows (no surprise). The final piece of the puzzle was a new set of Enkei PF01EVO wheels, a fairly lightweight and concave cast wheel that fits the wagon's personality righteously. 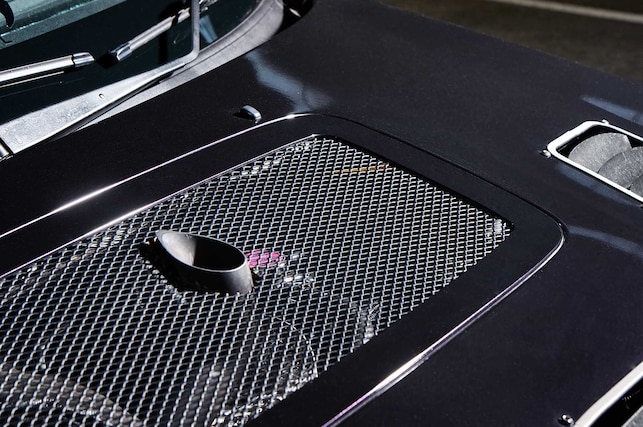 NOT A HAPPY ENDING JUST YET

Anthony drove around without issue, but sadly, things soon took a turn for the worse. Shortly after 'finishing' the car, a water galley cracked and air started leaking into the coolant. Then the catalytic converter ended up dislodged and pushed down the exhaust until it got stuck in a bend, slowly choking the engine until it eventually only made one pound of boost. Finally, due to the coolant issues and enormous backpressure from the cat, the engine went completely. "It was pretty serious. It's completely locked up. It's still in the car and I haven't pulled it out yet. When it happened, I pulled it off the tow truck, put it in the driveway and said 'you know what, that's not a priority at the moment' and just left it. I reckon it's pretty major inside, though. I took the injectors out and there were metal filings up through the head, so yeah... Probably pistons met valves and rods got a bit bent."

Anthony is not the kind to give up after coming this far, though, and bit by bit, he's saving up for another, stronger motor. The plan is for a de-stroked 2.5-liter, running 2.2L capacity, billet crank, forged pistons, forged rods, closed deck and bigger cams. He reckons that should be enough to get him to around 600hp at all fours, and thankfully, his current supporting mods are enough to handle that without needing to be swapped out. He's also planning a new look with WRC-style fenders molded to the rear, for a more 'factory' appearance. "I figure if I can make it as wide as it is now but looking stock, that'll be a good option," he concludes. 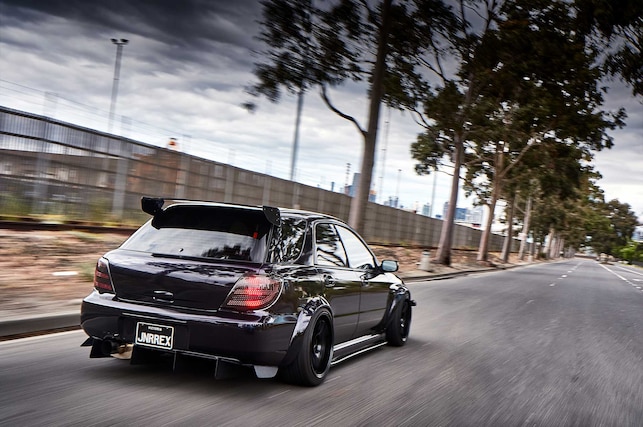 So yes, onward and upward. They say you can't keep a good man down and Anthony is one of the good guys, so it's no surprise he's aiming to get his "STI wagon" back on the streets of Melbourne and in better shape than ever.