12 years ago, Subaru made a bold move to offer its all-wheel-drive flagship WRX STI in only a five-door hatchback/wagon. I'm a huge fan of hatchbacks with a VW GTI and EK Civic in my resume so I didn't mind, but many felt the second-gen STI should've remained in sedan form. In 2011, Subaru reintroduced the STI sedan and then eventually phased out the hatch. The people had spoken, and Subaru listened.

Regardless of the mixed reviews, there were still thousands of enthusiasts who welcomed the wagon with open arms. The GRB STI retained an attractive spec - 305hp turbocharged flat-four, six-speed manual, Brembo brakes, forged 18-inch wheels and advanced AWD. Our friends at MotorTrend recorded a 4.8-second 0-60mph and 13.5-second quarter-mile in the hatch, as well as picked the STI over the Mitsubishi Evo X for its better practicality. It wasn't long until shops like JUN Auto and Runduce began modifying their own and over the last 10 years we've seen countless other gorgeous examples, including Thai Quan's 351hp Varis-wearing STI, and today's spotlight of Daniel Leung and his 2010 model. 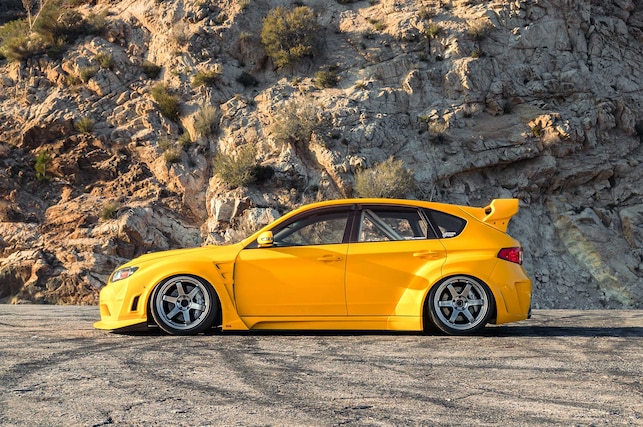 FAMILIAR FACE FROM OUR 2020 CALENDAR

If Daniel's car looks familiar, it's because he's featured in this year's Toyo Tires calendar, and we also caught up with him during our Subaru Angeles Crest Drive which featured the 2019 STI S209. Daniel took a different approach to his Subie, opting for more of a show car appearance using first-rate JDM parts and an extreme stance. On the canyon drive, I'd have to say he was the one who was falling back the most; however, with as much as he has invested into its striking appearance, we don't blame him.

The outside is highlighted by a Varis widebody kit accompanied by a matching carbon fiber hood and rear wing. Out back, the stock rear bumper has been replaced with a Syms Racing piece and for a cleaner look, the rear fenders were molded to the body. The finishing touch is a Sunrise Yellow paint job which was never made available on the GRB STI but introduced for the JDM Spec-C model. Go yellow! 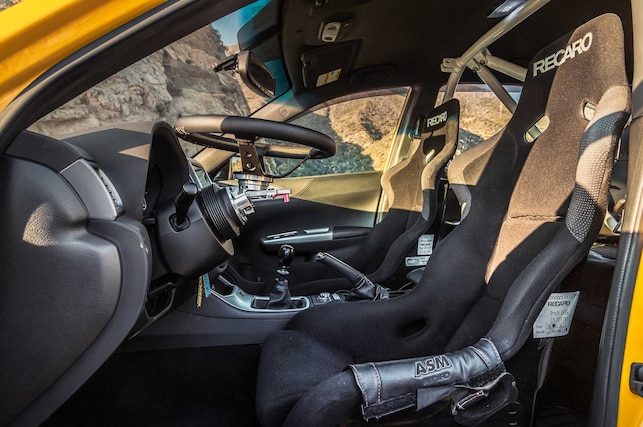 The brakes have been upgraded to Brembo six-piston front and four-piston rears, while Volk Racing TE37 wheels in a wide 18x11-inch size, with 295-series Toyo R888R tires fit snuggly under all four corners.

We're always skeptical when all-wheel-drive owners go with air-ride but with improvements in technology, they're becoming more and more popular among Subaru owners. Daniel opted to install an Air Lift kit, which has been proven on the track time and time again, for example with Cody Miles' 500whp time attack STI sedan.

According to Daniel, he's far from done with his project car with the engine bay still awaiting more dress-up parts and a turbo upgrade (hence why we didn't snap any photos of it). He's also planning to add more carbon bits with Varis side extensions and front diffuser, plus a Voltex rear wing. So, while WRX STI hatchbacks aren't exactly everyone's favorite body style, seeing a gorgeous example like Daniel Leung's sure makes us wish Subaru still offered an STI hatch its lineup today.