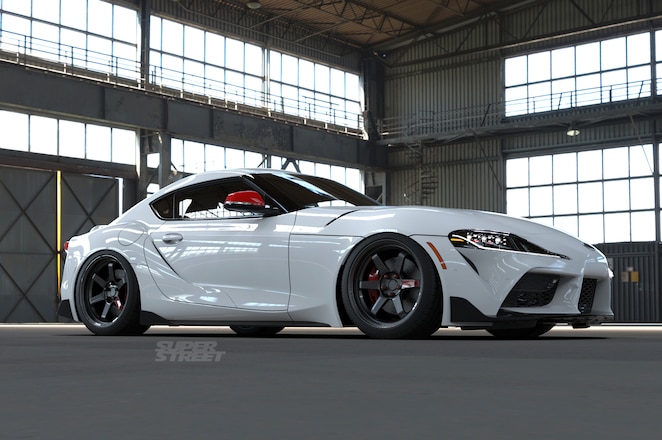 The Supra’s back, baby. Officially the A90, less official the “Mk 5,” and sadly for the fan boys, no 2JZ. But it is what it is, and while we admit up front we aren’t the first to the party with alternative universe 2020 Supra (even Toyota has its GR Supra Concept) we’ll just say we’re the first with a modified “street” version (albeit in 2D) of the return of the storied sports car. For that, we went straight to our go-to artist and all-around great guy, Jon Sibal.

As he has done so successfully in the past, Jon makes magic with the A90, doing all the right things to the girl to take advantage of her athletic lines. This Launch Edition in Absolute Zero White is on the milder side, but is part of a trio of concept renderings by Jon that will be released in the April issue of Super Street the magazine later in the year, each featuring more and more aggressive modifications. Our vision in white rides on 20-inch Volk Racing TE37SL wheels, its lone red spoke adding a dash of color that touches the lugs, brake calipers, and side mirrors as well, and achieves proper fitment with a snug 2.5-inch drop. 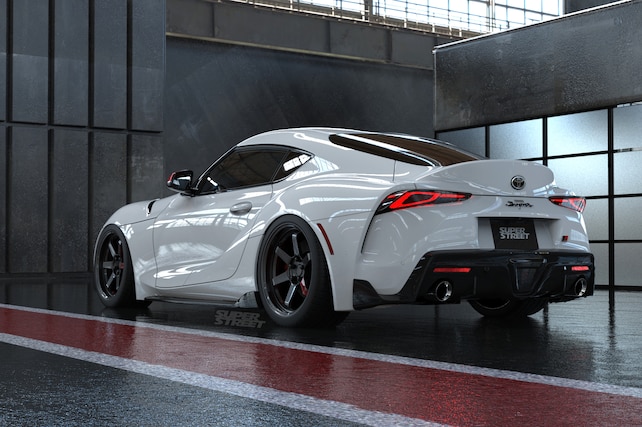 Design-wise, the car has matured nicely from its FT-1 roots, and as promised looks nothing like the BMW Z4, which shares a platform with the A90. Last May, Toyota teased the world more with its GR Supra Concept, and then a few months later we had a chance to get up close and personal with a prototype version of the new Supra – all pieces to the puzzle, all leading to today’s big reveal.

It’s almost guaranteed in the next few weeks we’ll see a flood of interpretations, just like we did for the Civic Type R and FR-S/BRZ prior, and the clock ticks for the first few in real life to start emerging soon after the car hits dealerships this summer. So what would your A90 Supra look like?