Stream 180+ episodes of Top Gear shenanigans and more with the Best Deal Ever at MotorTrend On Demand.

It was the first and only trip I ever made to the North American International Auto Show (NAIAS, aka the Detroit Auto Show), which in retrospect was probably no place for a dude who only wrote about tuner cars and culture. It was all good, though; the motor show is among the four biggies in the U.S. (with the expos in Los Angeles, New York, and Chicago), and the granddaddy, which made it worth going to at least once to see what all the hubbub was about. Plus, I would be in the audience when Mazda debuted their latest wild-looking concept car for 2008, the Furai—but little did I realize I would be one of the few to see the vehicle in the flesh before it met an untimely demise later in the year at the hands of Top Gear ... Magazine.

To be clear, Top Gear the mag and Top Gear the show you can stream right now at MotorTrend On Demand for the smokin' deal of $1 a month are not exactly one and the same. Yes, the print publication is named after the show, and yes, the show's most beloved hosts of Jeremy Clarkson, Richard Hammond, and James May, as well as its test driver The Stig, have all been contributors to TG Mag. But what happened to the poor Furai was clearly under the magazine's watch.

In any case, the Furai carried on Mazda's unique Nagare (Japanese for "flow") design language, used on previous Mazda concepts like the Nagare, Ryuga, Hakaze, and the Taiki. In typical auto show drama, the sports car concept crawled out from an area backstage to fanfare, with Mazda Director of Design at the time, Franz Von Holzhausen, behind the wheel. Before shutting off the three-rotor mill, he tapped the throttle a couple of times. It was just a tiny bit of high-revving defiance, but the quick raps still sent beautiful 20B screams echoing through Detroit's Cobo Center. 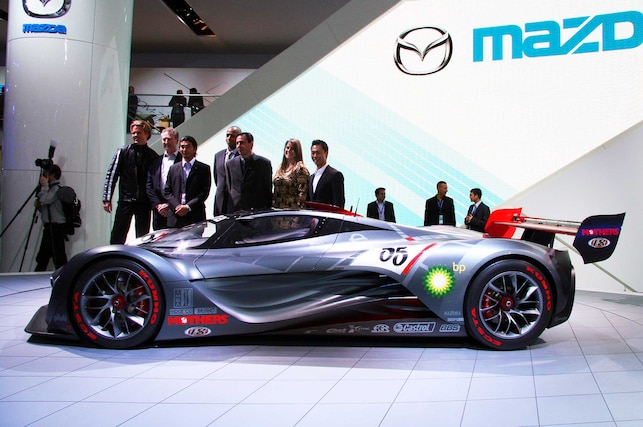 Furai, which means "sound of the wind", was built out of an American Le Mans Series (ALMS) race car, utilizing a Courage C65 chassis that earned its stripes during two seasons of LMP-2 Class endurance racing. In its previous life, the racer was successfully campaigned under the MAZDASPEED Motorsports Development banner by B-K Motorsports during the 2005 and 2006 seasons, driven to one victory and a total of nine podium finishes in 15 ALMS starts.

A 450-horsepower three-rotor rotary engine by tuners Racing Beat sat in the Furai's engine bay, a mill initially engineered to operate on 100-percent ethanol fuel, the first time a racing three-rotor rotary power plant had been fueled by ethanol. The Mazda design and R&D teams worked closely with Swift Engineering to refine the aerodynamic characteristics, assuring that Furai remained glued to the ground at high speeds. Through its existing relationship with Swift, forged through development of the Mazda/Cosworth-powered Champ Car Atlantic chassis, the team used complex Computational Fluid Dynamics (CFD) software to tune various Nagare design elements to function at a high degree of efficiency. Drag, downforce, lift and overall esthetics were all key considerations.

Mazda neither intended to race Furai, nor was it a supercar the company planned to mass produce; Furai was simply a design study. Without the restrictions imposed by serial production models, though, and with the freedom of an auto show environment, Mazda used the opportunity to evolve the company's Nagare design theme one more step closer to reality. 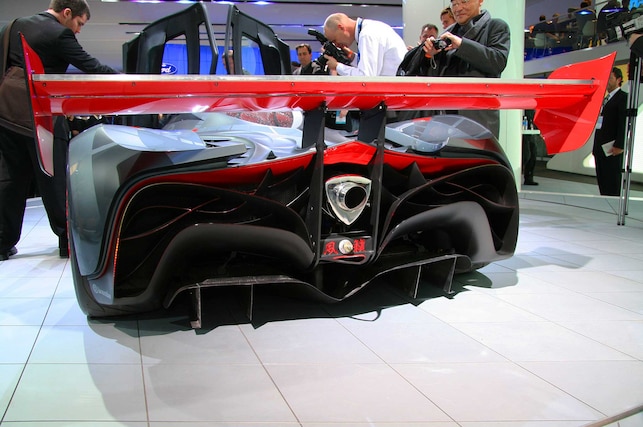 As the blips on the throttle at the NAIAS suggested, this thing was fully functional and even tested at tracks like Laguna Seca and Buttonwillow. It's probably why Mazda felt ok loaning it out to various media organizations so they could flex the concept's zoom-zoom. Alas, Furai would not even see out the year; while testing it at an airbase northeast of London, the Top Gear (mag) crew accidentally destroyed the car in a massive fire. We understand it took firefighters a few minutes to get out to the scene, and that's all the time it needed to burn beyond salvaging.

While a little sad, it seems also somewhat apropos that Top Gear fessed up to the gaffe; the show is renowned for humor and automotive challenges that often revolved around wrecking cars in the pursuit of entertainment. And you can consume those shenanigans with the Best Deal Ever at MotorTrend On Demand, $1 a month, where you can stream 3,500-plus hours of binge-worthy automotive entertainment that includes 180-plus episodes of Top Gear and much more. As for the Mazda Furai, it lives on in video games like Gran Turismo and Forza, as well as a Hot Wheels die cast. Godspeed, Furai; we hardly knew ye.