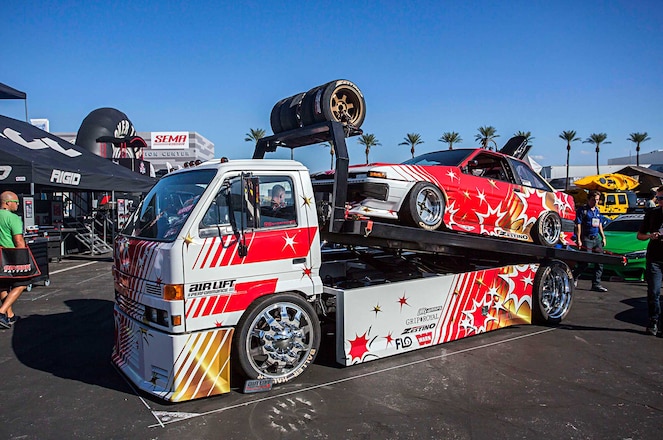 There is no exact science to grabbing people's attention at the annual SEMA Show in Las Vegas. If you asked thousands of people, all from different walks of life, how to do it you're likely to get thousands of different answers. For one display car, however, it was all figured out and so successful that it, stood out from the very moment its picture was uploaded to social media.

Miles Shinneman brought out the only AE86 we could find during SEMA week, but that's only half of this equation. Normally the convention centers' floors are only reserved for show cars, but Miles went the extra step and customized his '93 Isuzu NPR to match his 86, and both went on display.

Originally the NPR was a box truck but has since been converted into his support tow truck. Instead of leaf springs, Miles built custom link bars that allowed him to ride on air. For suspension, Miles went with Air Lift 3H ride control and Flow Modular tanks. The hydraulic deck and Warn winch are both wireless, which meant he can have his AE86 loaded up and ready to go in just a few minutes.

"I used to tow my S13 to the track with a brand new Dodge Ram, which I lost in my divorce two years ago," Miles tells us. "I wanted to stay busy with drifting because out here it's such a family feel. I scrambled to Craigslist to find a cheap diesel to tow with." 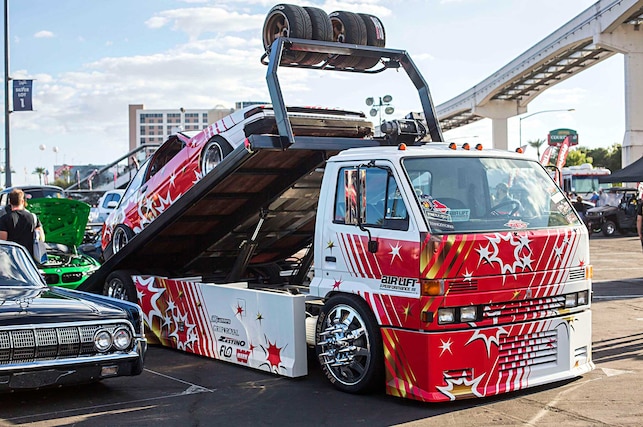 Although the AE86 is lightweight, Miles went ahead and threw in an LQ4 6.0 motor for good measure. On paper, Miles' NPR is a '93 diesel so he doesn't really have to smog the V8 under the hood. The wheels are custom 24-inch semi truck wheels, and the metal body kit serves dual purpose, adding style and cleverly hiding his toolboxes. The result is an NPR that looked as if it belonged on the floors of the Tokyo Auto Salon rather than SEMA.

Not to be outdone, the AE86 is just as dope as its hauler. It may have started life as an SR5 coupe, but it's now a 3SGE BEAMS-powered 86 paired with a J160 transmission and a narrowed Ford 8.8-inch rear axle. Up front he's running Hoshino wheels, while at the rear you'll find some classic Work Equip 01 wheels wrapped in Zestino tires. 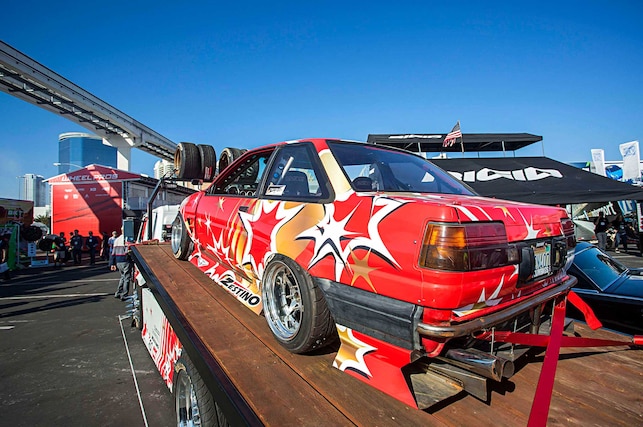 Unlike many cars at SEMA, this 86 was built to be driven, and driven hard. Miles tell us he already has a drift event at Thunderhill Raceway this month and Winter Jam at Sonoma Raceway in December. Wherever it goes, we're sure it's going to get a lot of attention—just as much as it did at SEMA 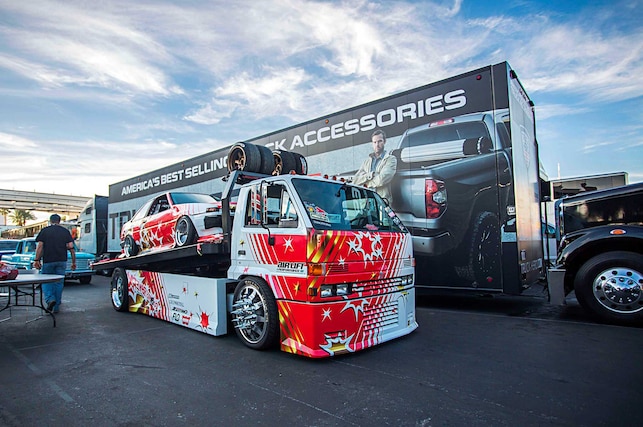