Home  |  Features  |  Every Shop Needs a 2005 Toyota HiACE Workhorse as Cool as This!
Subscribe to the Free

Every Shop Needs a 2005 Toyota HiACE Workhorse as Cool as This! 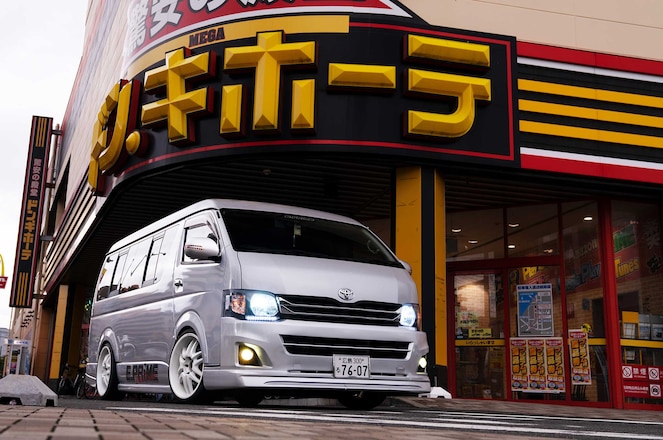 To say that vans are much cooler in Japan than they here in the States, is a bit of an understatement—take for example this 2005 Toyota HiACE. Van sales and culture thrive in Japan. In fact, on the streets of Tokyo or Osaka today you're likely to find more vans, minivans and kei vans than SUVs, wagons and crossovers combined. One specific model that comes up more instances than most is the HiAce. Pronounced "High Ace", it's been around for 50-plus years. They come in many different configurations and they're recognized for featuring a towering high roofline. Commercially used as taxis, ambulances and work trucks, there are also clever, tuner-minded HiAce owners out there who have modified their vans to be quite unique. In the case of Eiji Daito of TotalCreate E.PRiME, he's converted a fifth-generation HiAce to be not only his company work van, used to lug around parts, but he's also altered it in a fashion that had us geeking out as much as we did over his RB-swapped Nissan S13 Silvia.

Although the longitudinally mounted, 2.7-liter 2TR-FE straight-four may be stock, save for a custom center-port exhaust and Cusco limited-slip (estimated to make 160hp), other areas of this van have seen extensive attention. Half component hauler and half kickass daily driver, the suspension, brakes, and aero on this HiAce have all seen overhauls. 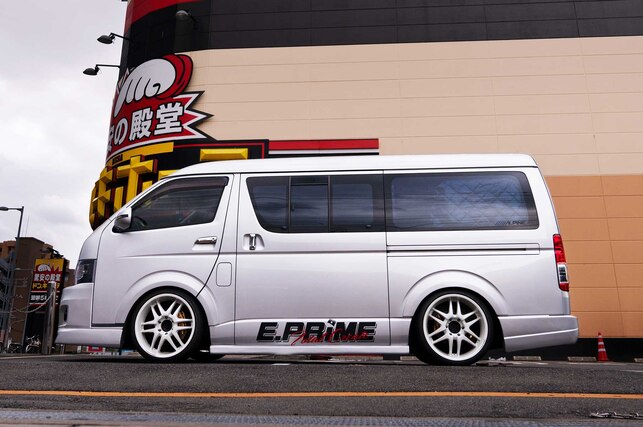 Being the kind of guy who detests sloppy suspension and sluggish stopping power, Daito-san spent a lot of time focusing on his shop van's handling characteristics and braking capabilities. What started with slapping a set of KYB shock absorbers underneath, quickly turned into the installation of an M Techno reinforced torsion bar, along with one-off leaf spring lowering blocks. These were followed by the installation of a stiffer stabilizer bar and specialized bump stops to guarantee that the C-notched frame would have a buffer when bottoming out.

Stops at red lights are made possible by GDB Subaru Impreza front brakes, a Brembo caliper conversion that relies upon a set of custom brackets and one-off, two-piece rotors. But when it came time to ditch the HiAce's stock rear drums for a full GDB Subaru Impreza setup, Daito-san had to dig a bit deeper into his tool chest. This meant finding an e-brake solution and then building his own backing plates, brackets, and stainless lines, all of which he did in his shop.

Style and additional grip are applied by a set of Rennen rollers resprayed in a blue pearl white color, all four of which rock Nitto NT555 rubber and sit in squared 20x8.5" sizing. Adding to these sharp looks are European market front and rear spoilers, one-off E.PRiME side steps, LED turn signal mirrors, modified front and rear lights and paint-matched moldings. Daito-san also took the time to create some custom 10mm fender flares out of FRP, and then shaved out the front inner fenders to prevent excessive tire rub. Like we said, this van has a surprising amount of cool details built into it. 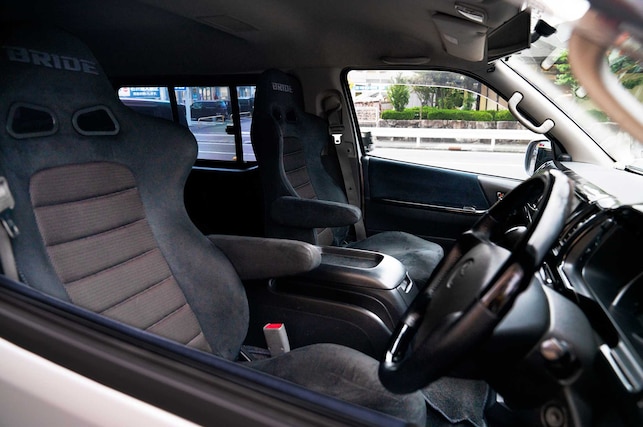 As for the cabin of this HiAce parts hauler, you'll find a set of BRIDE Euroster II reclinable seats in charcoal gray resting up front, along with a perforated leather shift knob and Alcantara wrapped door cards. Electronics include an Eclipse navigation unit, Clarion AddZest speakers, a Pioneer subwoofer and a Koiiler amplifier. Simple, purposeful, stylish, and surprisingly stable in the corners, our ride to and from the garage in the E.PRiME HiAce brought with it smiles and nods of approval from the entire crew.

So while an immaculately assembled and shaved Nissan S13 Silvia was the reason why we were visiting Total Create E.PRiME, not to mention the surprise Mazda Miata MX-5 hidden behind the garage, Daito-san's custom Toyota HiAce really put the proverbial icing on our aftermarket cake that day.

Every Shop Needs a 2005 Toyota HiACE Workhorse as Cool as This!
Photo /

VIEW SLIDESHOW
1 - 9 OF
Every Shop Needs a 2005 Toyota HiACE Workhorse as Cool as This!