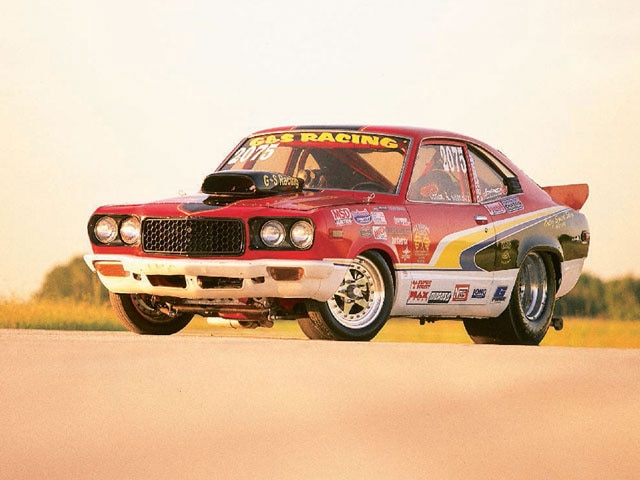 GNS Racing RX-38.435 @ 157.45There are many obstacles a racer must face when building a strip warrior, the biggest being finances. Everybody knows building a drag caris expensive and the faster you want to go, the more it's going to cost you.

Want to go, the more it's going to cost you.

For Outlaw racer Carlos Gonzalez, money is always an issue. Gonzalez wanted to build an Outlaw racer that was quick and competitive but still within his budget.

Having an extensive knowledge of rotary engine dynamics, Gonzalez knew his future racer was going to be a Wankel-no piston power here. Instead of purchasing a third-generation RX-7 and blowing most of his money on the chassis, Gonzalez decided go with a cheaper RX-3 platform. The front-engine, rear-drive configuration, combined with its overall lightness made the "3" a perfect candidate.

He found a pristine Mazda RX-3, which he purchased for only $3,500, compared with the $15,000 he'd have to spend for an RX-7. Gonzalez started work on the chassis; a welder by trade, Gonzalez installed a four-link rear end complete with a 9-inch drag spool and Strange axles to replace the weak stock drivetrain.

To keep the front wheels from lifting too far off the ground, Gonzalez also added a wheelie bar to increase traction to the rear wheels. To enhance safety and stiffen the chassis, a 10-point chrome-moly roll cage was incorporated. With all the chassis fabrication performed, the car was sent to Frank Mossimino for sheetmetal massaging. Mossimino straightened the metal and sprayed the "3" with a five-color paint scheme anyone can admire.

Gonzalez knew the 12A engine from the RX-3 wasn't going to cut it, so he decided to purchase a stronger and more potent 1993 13B twin-turbo engine.

The low-compression rotors proved favorable to Gonzalez; he planned on turbocharging the engine with a single Turbonetics T70 series turbo. To extract maximum power from the 13B, Gonzalez disassembled the engine and performed a street port on the rotor housings and polished the intake ports.

A large capacity Moroso oil pan was added to the mix to keep things cool. The most interesting note on the powerplant is the lack of an intercooler, which means Gonzalez is probably running alcohol. What also caught our eye is the lack of electronic engine management, as the RX-3 runs a mechanical fuel injection system set up by Gonzalez himself. The Turbonetics T70 hairdryer feeds directly into the intake and is safeguarded by a Turbonetics Godzilla blow-off valve. A GReddy Type-C wastegate ensures the rotary reaches maximum boost pressure quickly with no boost spikes.

A McLeod Industries dual-disc clutch and a G-Force 2000 sequential transmission harness the rotary power. The five-speed sequential tranny allows Gonzalez to quickly go through the gears without missing a shift. Contact to the pavement is handled by Holeshot F/X Phoenix aluminum, wrapped with Mickey Thompson 24x4x15-inch gumballs out back and 15x3x31 skinnies up front.

The simple engine and chassis combination has been good for 8.435 timeslips at more than 157 mph. Gonzalez has done more than just compete; he won the 2001 NHRA Modified Class Championship, proving cost-effective cars can still win in the big leagues.

In 2002, he plans to look into a nitrous system. But with the two power adders, he would have to add some weight to the Mazda. We're confident Gonzalez has a few tricks up his sleeves to make the Mazda even faster. Outlaw racers watch out, because the "3" is here and ready to play.